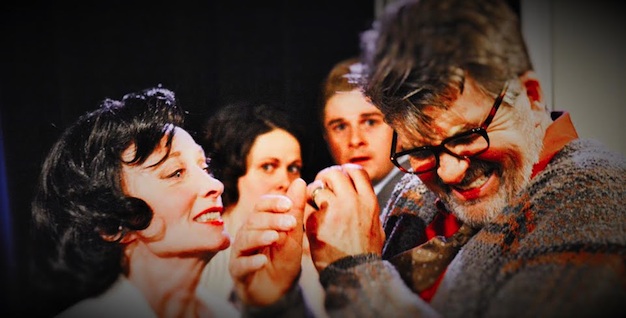 Burgeoning Stratford hotshot Tyrone Savage tread a tricky path very strategically in getting his vision of Who’s Afraid of Virginia Woolf to the Storefront stage (where it’s currently playing until December 21st). Edward Albee’s blackly comic domestic drama is famous in name but rarely produced on stage, the shadows of Elizabeth Taylor and Richard Burton in the film version looming large.

In the supporting roles of young couple Nick and Honey, Savage chose the operators of his indie venue, Benjamin Blais and Claire Armstrong (both excellent though Armstrong in particular impresses with great timing and detail work). For the infamous warring pair at the play’s heart George and Martha, the young director cast, of all people, his parents Janet-Laine Green and Booth Savage. No matter the circumstances of their family dynamic, you have to admit that that’s gutsy. It does, however, spare him the usual agony of searching for strong enough performers in the appropriate age bracket willing to work within an indie framework. With long careers behind them, Green and Savage (the elder) bring excellent gravitas to the production, though Green’s ferocious and fragile performance far outshines her husband, from whom I wanted a few more dynamics.

Savage (the younger)’s direction is straightforward and unadorned, a move that serves the rarely produced theatrical text but doesn’t add much for those nonetheless familiar with the story and interested in his a point of view. It’s as though he’s entered an indie sphere- accustomed to the likes of Red One’s bafflingly challenging Skriker and Kat Sandler’s millennial-courting new works– and filled the space with an effective but conventional commercial production not unlike Soulpepper’s Death of a Salesman or a standard Shaw period piece. Beyond his fairly well-established role as a performer in such shows, Tyrone Savage may prove a key figure in mainstream commercial theatre in Ontario down the road; certainly, his Virginia Woolf reads like a try-out for such a position. I’m not convinced, however, that The Storefront- a space more commonly devoted to innovation and risk- is where he belongs.