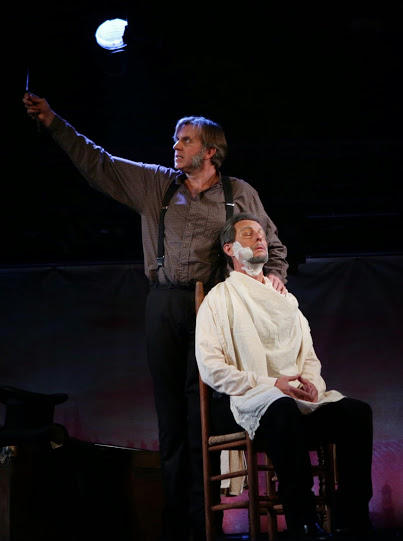 A Haunting Thriller with Safety Clippers

The Lyric Stage Company does Sondheim well. Director Spiro Veloudos speaks Sondheim’s language as if it were his natural tongue, and he does a good job of translating to the stage with the help of his accomplished cast. Except the entire production felt afraid to push the boundaries or explore the nuances of Sondheim’s dense score and haunting book in the latest production of Sweeney Todd: The Demon Barber of Fleet Street. The Lyric Stage Company produces a thoroughly enjoyable tale of a man who was wrongly convicted of a crime and judgment, and his blood-thirsty revenge against his wrongdoers, but, like a ghost story that is toned down for the little ones, the production felt safe. While their Into the Woods this past Spring sparkled with new life and interpretation of fairy tale characters, Sweeney Todd was just about what you’d expect from professional and talented actors and designers. I wanted more blood.

Sweeney Todd is a musical thriller with music and lyrics by the incomparable Stephen Sondheim and book by Hugh Wheeler. Set in gritty 19th century England, the musical (which feels more like an operetta) tells the tale of Benjamin Barker (who later “transforms” into the demon Sweeney Todd), a barber-turned-butcher, who was arrested on trumped-up charges by a jealous and lecherous Judge Turpin. Judge Turpin, along with loyal sidekick Beadle Bamford, ensures that Barker is locked away for fifteen years, allowing Judge Turpin plenty of time to “pursue” Barker’s pious wife and kidnap Barker’s young daughter, Joanna. When Barker returns, he is known only as Sweeney Todd, to most, but Mrs. Nellie Lovett, the devoted proprietress of the meat pie shop below Barker’s former barber shop, recognizes him and narrates the prior exposition for Barker and the audience with lament and just a touch of prodding aggression. She returns Barker’s (hell, let’s call him Todd, since who cares who he was, he’s about to become the best blood-thirsty murderer to grace the stage—until we finally get an American Psycho show out of previews) razors and lets him into his former barber shop above her meat pie shop (proximity is everything, m’dear).

Meanwhile, in lighter news, Anthony Hope, a young sailor who rescued Todd at sea, has fallen in love with a mysterious blonde, who turns out to be none other than Joanna, Todd’s daughter and Judge Turpin’s ward prisoner / future conquest. Both Anthony and Judge Turpin vow to marry Joanna, though they each have different ways of expressing their love (one through gorgeous tenor solo, the other through flagellating himself—I’ll let you guess who does what). Todd meets the latest competition for a shave in town, the faux-Italian barber Adolfo Pirelli and his simple-minded assistant, Tobias (Toby) Ragg, who Todd trumps in a shaving challenge; Todd establishes himself as the Barber of Fleet Street, and offers his first “Last Shave” to the Beadle. Unfortunately, Pirelli is the first of Mr. Todd’s (many) victims, after his poorly-planned blackmailing scheme goes awry. What to do with a dead body? There’s a recipe for success here somewhere, and Mrs. Lovett capitalizes on Mr. Todd’s manic vengeance with a new ingredient in her meat pies for Act II (they’re to die for). Since we’re not Wikipedia, I’ll let you see the show for what happens to the vengeful barber and find out who possesses marries the beautiful Joanna.

Christopher Chew creates a unique and haunting Sweeney Todd. Rather than focus on the “demon” inside Sweeney, Chew emphasizes the man searching for answers and we see the subtle transformation, especially in the awe-inspiring “Epiphany” late in Act 1. Here, we finally understand that Benjamin Barker has run out of “legal” options and he must take the law into his own hands, and it’s a tailspin of destruction for Act II. I appreciated Chew’s willingness to focus on the relatable emotions and turmoil for his Sweeney, instead of going for histrionics too early. He expertly sings the score, but he sometimes lacks the gruff tone and blood-thirsty edge for Sweeney’s more demonic emotional turns. Amelia Broome is a delight as Mrs. Lovett, but she relies on her unmatched acting ability, and less on her vocals; while Dame Angela Lansbury had a similar approach, with so many outstanding Greater Boston musical theatre actresses, I wondered if there was a stronger choice for matching vocal to acting talents. She cleverly plays the adoring meat pie shop proprietress, especially in her relationship to Chew’s Sweeney, but many of the songs seemed to slip away from her, like her opening “The Worst Pies in London.” By Act II, Broome had caught hold of Sondheim’s songs by the coattail, but it was too little, too late. I adored her in The Lyric’s Rich Girl, but, for me, this musical was not the best for her.

There was very little wrong with Sam Simahk’s Anthony Hope; he sings a ballad into our hearts with confidence and ease. He develops adorable chemistry with the surprising resilient Meghan LaFlam’s Johanna. However, Simahk had just the right voice for Rapunzel’s Prince in The Lyric’s Into the Woods, but not quite the right timbre for Anthony. His “Johanna” was stunning, however, turning the song of longing into a song of promise; you believed that Anthony would save his Johanna. LaFlam defied my expectations with her Johanna; what is normally an annoying, whiney, almost-heroine stuck in a tower turned into a young woman who sought to escape (at any cost) the dire circumstances in which others placed her. Her soaring soprano was genuine, instead of the usual grating stratosphere in which Johanna’s songs can normally sit (thanks, Sondheim; kudos LaFlam for your control). Phil Tayler walks the fine line of annoying and genuine with his Tobias Ragg, an understatedly difficult role to play. Tayler impresses with his vocals, especially “Pirelli’s Miracle Elixir” (you’re welcome for the earworm, if you know the show and song), especially after his throwaway role in SpeakEasy’s Carrie earlier this season. However, his iconic number “Not While I’m Around” lacked the earnestness and devotion needed; what should have been another song of promise seemed lost in the vocals, ignoring the powerful and hopeful lyrics in this dark book and score.

Other leading characters perform rather than create their roles. Paul C. Soper’s Judge Turpin manages to hit the creepiness factor in “Johanna (Judge’s Song)” but doesn’t hit the performance off the scale, particularly in his other scenes. Remo Airaldi’s Beadle is a forgettable menace in Sweeney’s plans and retribution, a mere plot device rather than a memorable character. Davron S. Monroe’s Adolfo Pirelli never quite hits the notes for me, either in the score or in the character. Lisa Yuen is a recurring delight as the Beggar Woman, but the role limits her, compared to her strong performance in The Lyric’s Into the Woods this past spring that showed her real talent.

In a tale of “greed, lust, class abuse, and vengeance” (stolen from Veloudos’s Producing Artistic Director Notes), the Lyric’s production felt safe and comfortable, especially for someone who knew the score and story. Regularly outstanding scenic designer Janie E. Howland does a knockout job creating the gritty London landscape for this horror story to play out in, especially in her use of levels; as usual, The Lyric uses their space to its fullest capacities with actors occupying every inch of the intimate space. Lighting designer Franklin Meissner, Jr., does an adequate job with the lighting, but the effect is dulled, never quite reaching the emotional depth the score and story give for the lighting design’s potential.

Which all goes back to the fearless leader, Spiro Veloudos. A brilliant mind and director who brings some of the best in classic musical theatre to the Greater Boston area, Veloudos creates an accessible Sweeney Todd. His concept never seems unhinged enough, never daring enough to scare audience members into the horrors of when we lose control of our actions and seek justice and vengeance in our own (twisted) ways. As a lawyer, I was fascinated by the idea of taking the law into our own hands when we lose our faith in the justice system, based on the corrupt individuals who control this system. Perhaps I had too high expectations, given their exceedingly brilliant Into the Woods, or perhaps the production was too tempered with salvation, and not enough of bloodthirsty vengeance. Regardless, the production is a treat for those who haven’t met the Demon Barber of Fleet Street. If this is your second or third encounter, perhaps you know everything that you should expect; a close shave, but not close enough to draw blood.