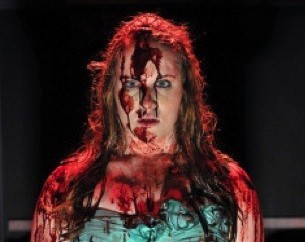 SpeakEasy’s Carrie Is a Bloody Mess

Carrie: The Musical has an awful book; there, I said it. Lawrence D. Cohen took every piece of camp from Stephen King’s popular novel, and removed almost all of the humanity from the characters to create a one-note musical of epic proportions. The SpeakEasy Stage Company attempts to amend this broken musical, but, under the less-than-capable leadership of Director Paul Melone, the production struggles to piece together the mismatch of pieces. While some My Theatre (Boston) favorites make some noteworthy attempts at this flawed piece, the production is belabored by odd technical and directorial choices, which leave the musical as awkward-seeming as its teenage protagonist.

Carrie: The Musical follows the eponymous teenager, Carrie White (Elizabeth Erardi), a young girl who slowly learns that she is, indeed, different from her peers. Following a freak accident after being teased for getting her period, Carrie, deemed “Scary Carrie,” returns home to her mother, Margaret White (Kerry A. Dowling), with some knowledge that she might have special powers. Her mother fears for her daughter’s soul, and she shackles Carrie to pray and atone for her sins (in the awe-inspiring song “And Eve was Weak”). Carrie continues to grapple with her newfound powers, surprising and scaring her mother.

The 2012 revival, however, focuses much more heavily on Sue Snell (Sarah Drake), one of Carrie’s classmates who begins to see the error of her bullying ways and reprimands her classmates far too little, far too late. The worst among the classmates is Chris Hargenson (Paige Berkovitz), a privileged and pretty girl who naturally rules the school. At Chris’s party, Sue turns her back on Chris following her perverse description of and ruthless menacing against Carrie. The next day, Sue attempts to apologize at school but Carrie explodes at her, thinking that Sue is trying to trick her. The school gym teacher Miss Gardner (Shonna Cirone) tries to make amends for yesterday’s locker room scene by requiring the girls, including Chris and Sue, to apologize to Carrie; Chris refuses to apologize and Miss Gardner forbids her to attend prom. Relentless for revenge against this injustice, Chris recruits her boyfriend Billy Nolan (Phil Tayler) to humiliate Carrie at prom. Unknowingly, Sue assists Chris by convincing her own boyfriend Tommy Ross (Joe Longthorne) to ask Carrie to prom. Despite her mother’s protestations, Carrie plans to go to prom with Tommy, but not first without Carrie performing some more “devil magic” towards Mrs. White.

It makes for a lengthy Act I, and, unfortunately, there’s not much to happen in Act II. The kids sing about how amazing prom is and what an amazing night they will have, that they will remember it for the rest of their lives. Little do they know how short-lived their memories of that night will be. Carrie arrives at prom, looking like a modern-day Cinderella, and she dances with Tommy, while Chris and Billy prepare a bucket full of pigs’ blood, lurched high above the stage, ready to be dumped on Scary Carrie’s head after she wins the rigged Prom Queen election. Sue discovers Chris and Billy’s plot, but the skeptical Miss Gardner stops her and the plot goes perfectly. Except Carrie has magical powers and she performs her own terrible revenge on the attending prom-goers, while the helpless and sole survivor, Sue, watches. No wonder she’s in therapy. At home, Mrs. White has decided to sacrifice Carrie because “thou shall not suffer a witch to live,” or some other scripture business, and she plunges a knife into her daughter’s back as soon as Carrie comes home crying from the prom. Mrs. White fails to ask about why her daughter is in a torn and bloody prom dress, smelling like pig intestine, but I guess it didn’t matter at that point. Well, Carrie isn’t dying without a fight, and she uses her own magic to stop her mother’s heart. To add injury to her trauma, Sue stumbles into the White bungalow, and she witnesses more death and holds the dying Carrie in her arms.

Given the play’s synopsis, the musical should be dramatic and heartbreaking. Unfortunately, it stumbles from plot point to plot point with difficult and clichéd dialogue, and offers few redeeming songs. Dowling makes a valiant effort to make Margaret White a complex character, but she misses an ideal moment of discovery when she realizes that her daughter might be different than other children. The song “And Eve Was Weak” is a testament not only to sexuality, but to the power of evil to overcome us—Mrs. White could know based on Carrie’s description that her daughter harbors dark and mysterious powers. To punish a child based on her period makes Mrs. White seem hysterical rather than a mother protecting her daughter. Regardless, Dowling knows how to sell a song and she delivers in her limited role.

Shonna Cirone also surprises as Miss Gardner; while the role feels a little too “afterschool special,” Cirone finds some nice moments to show her character’s depth and offer glimpses of her own ability to relate to being a tortured teenager. Paige Berkovitz is strong as usual, but she felt toned down, only truly unleashing her dynamic force as an actress and singer during “The World According to Chris.” Sarah Drake is mostly a strong protagonist, though she never seems to be compelling enough to carry us through the entire show’s dramatic arc; too often, she feels like a one-trick pony, leaving her more suitable to the strong supporting roles like her Natalie in Next to Normal. The ensemble creates some nice supporting scenes, and they are a mostly talented group of The Boston Conservatory students. But they also felt a little clichéd, and they played many high school stereotypes for the few giggles and laughs in this belabored script.

The two boyfriends were horribly underutilized, leaving talented performers like Joe Longthorne and Phil Tayler scraping for any noteworthy moments to sell their impressive talents as singers and actors. Longthorne is given more material, but it’s still never clear who Tommy is and what he wants. It’s difficult to talk about Elizabeth Erardi’s Carrie White; she struggles as a young performer in this hopelessly flawed role and script. While she has a good voice, her presence onstage is not powerful enough to carry some of the role’s solos, especially “Carrie.” She felt restrained and forced into certain character choices, which felt both unmotivated and unnatural. Erardi has some skill, but you wouldn’t know it watching her performance as Carrie.

And here is a suitable time to mention the biggest problem with this production: the director. Despite some strong casting decisions, Paul Melone seems to muddy the production with micromanaging, cheesy moments, and technical decisions. It felt like the youthful actors, with their naturally good impulses for playing teenagers, were stifled and orchestrated into mere caricatures by an adult organizing a formalized class photo. The ending is the most upsetting part. Many of the show’s magical moments are given a suitable touch—the small movement of a chair on the floor, the shifting of a crucifix on the wall, the simple (and cop-out) use of a projection over the show’s action—but the prom scene of mass destruction was a ballet of terror. I can’t blame Larry Sousa for choreographing it, because his choreography for the show up to that moment was cleverly and simply done; he found a groove for navigating these teenage actors’ bodies into natural and simple movement that excellently fit the musical’s tunes and moments. I can’t blame Angie Jepson (fight choreographer) for the movement in the revenging deaths because Jepson seems to have merely cleaned up the bloody mess that was orchestrated long before her arrival. No, the fault in the confusing and choreographed nonsense lies with Melone alone, as he attempts to make a stylized choice that fails to capture the magic of the movie original. If you imagine actors throwing themselves into objects with no clear motivation except the mere hope that some divine cinematography will save the wreckage, you might well imagine the final moments of Carrie. While this scene might be forgivable, the stage direction for the remainder of the play is as off-kilter and mis-micromanaged as this scene.

I commend SpeakEasy Stage Company for taking a chance on Carrie, and I am thankful that many young performers were given opportunities to shine in a production that fit their age and experiences. However, the musical is just not strong enough to support their efforts, and Melone does little to alleviate the musical’s deficiencies to support his actors. While the lighting design by Jeff Adelberg offers some great effects, and the costume design by Emily Woods Hogue is spot-on brilliant for the play’s time and place (especially offering some flattering ensembles for the teenage prom), the biggest highlight is Eric Levenson’s scenic design that manages to transition effectively between scenes and to offer the actors many opportunities to engage with their environment. These technical elements are not enough to make Carrie: The Musical a worthwhile production because of the internal struggles with the musical’s substance and the micromanaging director. Carrie: The Musical is a lot like my memories of high school: a group of tormented teenagers who struggle to find individuality amidst adult presence with its own perceptions of excellence. I don’t remember high school being such a bloody mess though.