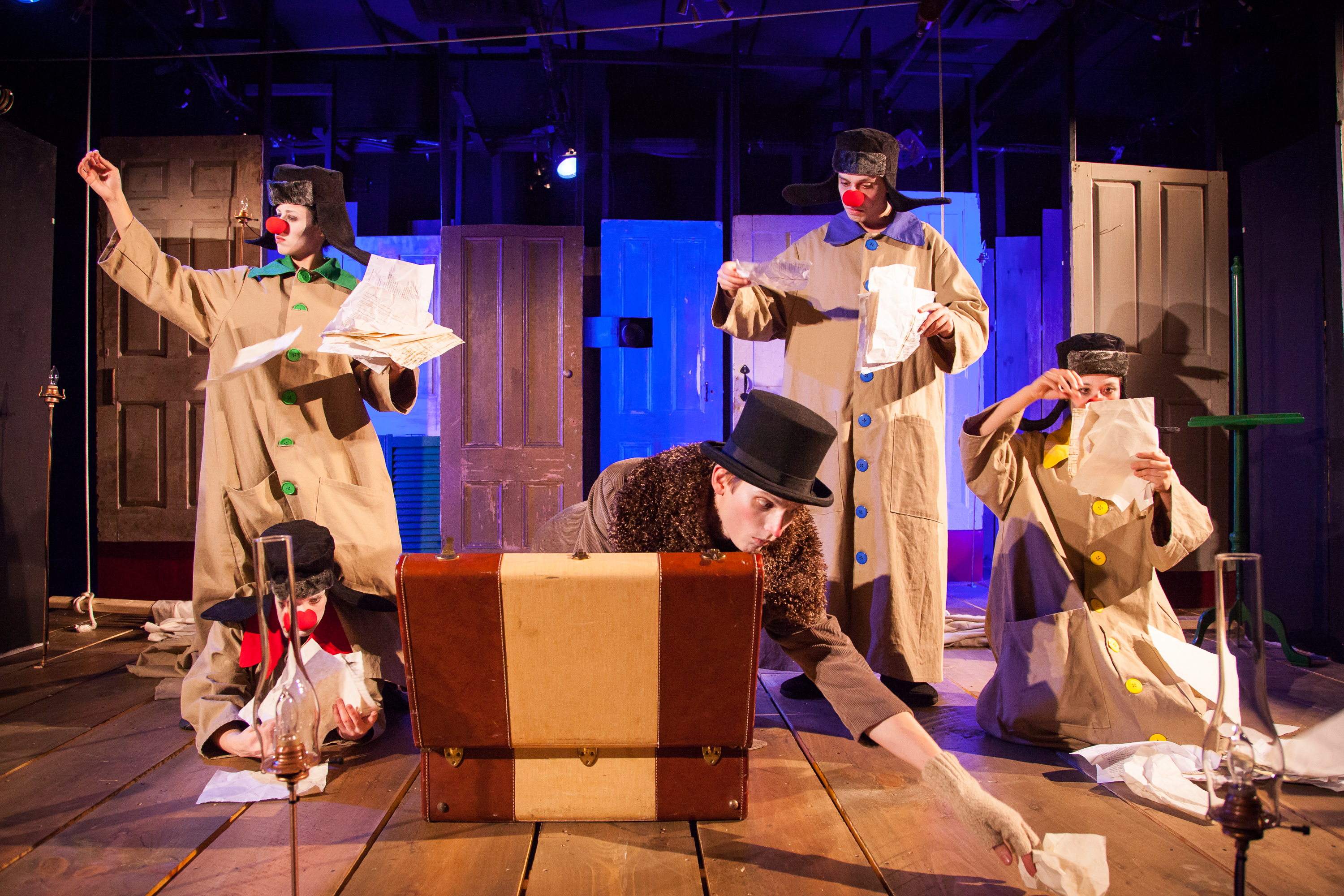 In the program notes of Knock! The Daniil Kharms Project, directed by Matthew Woods, dramaturg Matthew McMahan describes how the writings of Daniil Kharms were rescued by a friend, writer Iakov Druskin, from the bombed building the playwright lodged in; Druskin placed the “scattered remains…in a briefcase, and kept them hidden for decades.”

A few vignettes into Knock!, we see the fictional parallel of this anecdote in the hapless Yakov (Michael Chodos), a figure trudging through heavy Russian snow, laboriously pulling a sled upon which rests a suitcase. It isn’t long before he is accosted by a bunch of curious “buffoons” (Noah Simes, Mariagrazia LaFauci, Kaitee Tredway, and Libby Schap), a clutch of clowns who un-violently but relentlessly peruse and scatter sheaves of crumpled paper from Yakov’s case, while the poor man struggles to gather them all again. This Sisyphean episode goes on doggedly for a few minutes without going stale. I found it so amusing, I began to wonder whether I wasn’t a closet misanthrope. The jury is still out on that one.

But then, many of the scenes from Knock! are humorous in their very grimness. I can’t offer you a plot summary because there is none. Daniil Kharms was an avant-garde absurdist dramatist; although a successful children’s author, he was forced to keep his adult writings unpublished, opaque, and hidden from the Stalinist regime that eventually imprisoned him anyway. Any attempt to find narrative logic in the sketches that constitute Knock! is futile. But I can offer glimpses of the performance, scraps I gathered as they blew around the Boston Center for the Arts Plaza Black Box Theatre.

As usual, imaginary beasts does not disappoint when it comes to skillful physical movement and comedic timing (I was blown away by their production of Hairy Tales last year). Many of the actors, veteran “beasts,” stand out in their episodic roles. Joey Pelletier is hilarious in his dainty rendition of the constantly-curtsying Olga Petrovna, complete with a wig of ridiculous ringlets and a bulbous proboscis. Sarah Gazdowicz, as Kukuruzov, a sort of Soviet emcee, mesmerizes as the show’s ringmaster. She also has the most distinctive smirk and miffed lip-curl I have ever seen (all while looking rather dashing decked out in spats and polished top hat). Michael Underhill, the down-on-his-luck, balding, brick-struck Fool who has trouble remaining seated on his broken chair, is by turns pathetic and physically repulsive (I say this in the best way possible, of course). William Schuller, as the recurring figure of the author, Fedya, would have alarmed me with his constant, fretful clambering up, over, around, and under a wooden writing desk, if I hadn’t seen him perform similar acrobatic feats in many other Boston productions. His principle tormenter, his “Auntie” the babushka, played by Molly Kimmerling, was terrifying; her piercing, nasal, kettle-whistle voice, hissed through jagged, fang-like teeth at the unfortunate Fedya, will probably haunt me forever.

Some scenes were more dramatically successful than others. The recurring scenes with Yakov, wordless and bleak, needed no explanation and ranged from comical to menacing. In “A Man Left His House,” Underhill and the buffoons offer a bittersweet mix of humor and violence recognizable to anyone who has watched Wiley Coyote be bested by the Roadrunner. But other scenes felt more forced, and their repetition and recurrence didn’t serve the absurdity as well (I’m thinking of the interactions between Pelletier’s wrothful Watchman and Underhill’s beleaguered, cucumber-wielding Fool). A factor that may have played into these more stultifying scenes was the music (sound design by Chris Larson). The music in almost every scene was a bit too loud, sometimes drowning out the actors’ voices (problematic in a black box space). But while the music sometimes served to magnify scenes to a delicious hysteria, other times it overwhelmed them. The more unpleasant repetitiousness of the production often stemmed from tunes that were more recognizable (such as the organ rendition of the Danse Macabre, or Erik Satie’s Gnossienne No. 1).

Still, the evening has plenty of treats for anyone looking for untraditional theatre. The set was an ominous collection of staggered wooden doors over wooden floor boards: when the lights went out and a glow emanated from beneath the boards, simulating a subterranean boiler room, or a hell-like pit of fire beneath the stage, it made me catch my breath (set design by Christopher Bocchiaro and Matthew Woods; lighting design by Bocchiaro). The costume design, by Cotton Talbot-Minkin, was based on earthy browns and greys accentuated by trims of bright green, blue, or red; the buffoons wore falsely-cheery red clown noses.

Snatch at what cheer you can when you attend this performance; while there is plenty of humor and entertainment in Kharms’ absurdist works, the blackness of his humor is palpable, threatening, and has an eerie aftertaste.

The imaginary beasts production of Knock! The Daniil Kharms Project, directed by Matthew Woods, is playing now through October 18, 2014 at the BCA Plaza Black Box Theatre.