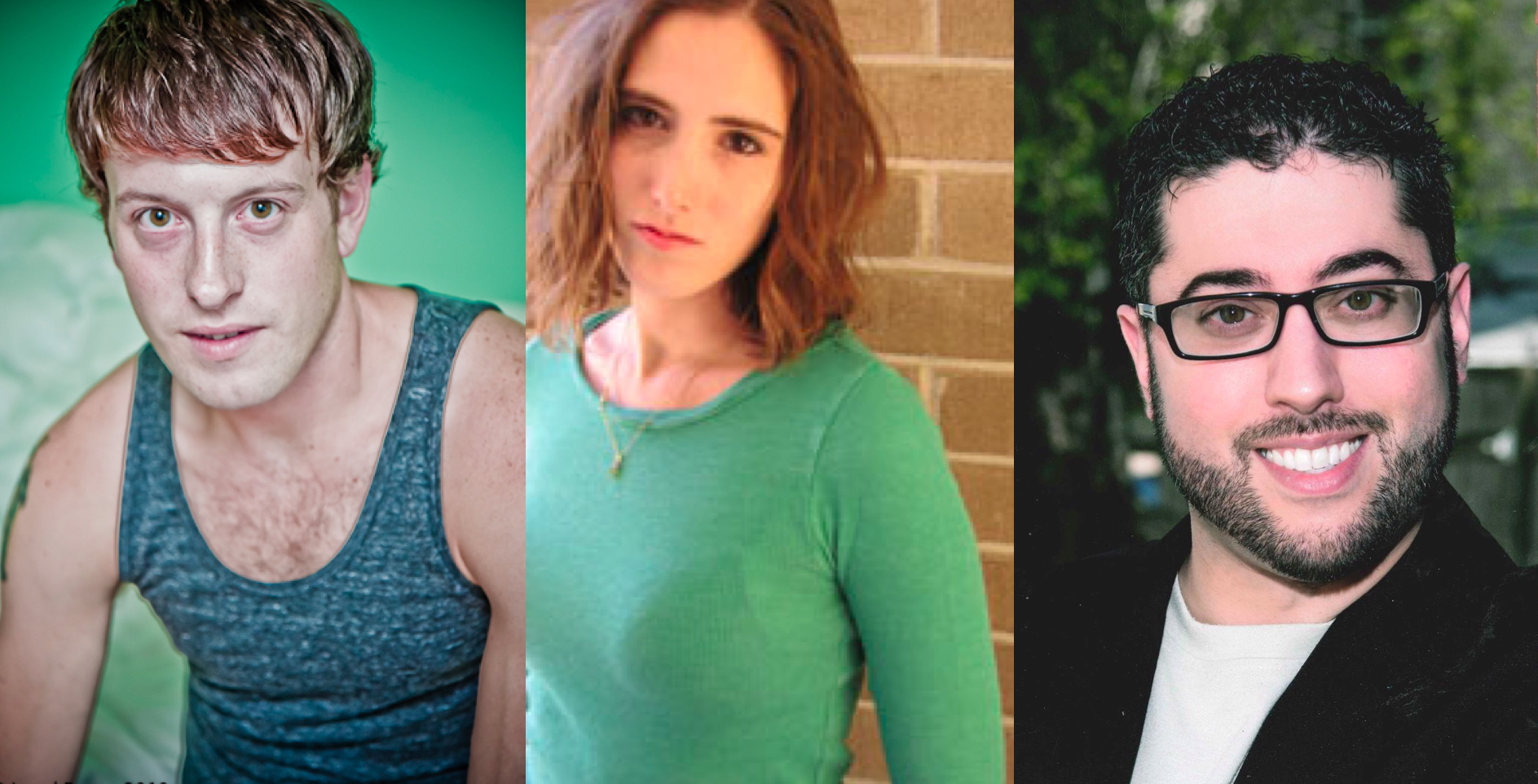 One of Boston’s most ambitious projects of 2012 was a collaboration between three of its most prominent indie companies. We spoke to the Artistic Directors who made the twice-nominated production happen: Joey C Pelletier (Heart & Dagger Productions), Danielle Leeber Lucas (Boston Actors Theater), and Mikey DiLoreto (Happy Medium Theatre).

The Best Ensemble nominees- who we’re collectively calling The Polaroid Stories Team– share their thoughts below.

How did you develop Polaroid Stories as a collaboration among multiple theatre troupes?
Happy Medium Theatre (HMT) – Polaroid Stories was one of those shows that HMT wanted to do from the moment we read it. However, a former member (Stacy Fox) made the excellent point that to pull this show off, we couldn’t “half-ass” it and we had to give the script the respect it deserved. After a year or two, Joey and I were talking and we said “let’s do it together.” Then, we brought on the BAT team because, well, they rock and we wanted to make this a trifecta of awesome.

Heart & Dagger Productions (H&D) – It was wonderful sharing the responsibilities of producing theatre with two companies who have been at it a bit longer.  Heart & Dagger definitely grew from BAT and HMT’s knowledge and teamwork.

What was the most challenging part of the collaboration?
HMT – I think the only challenge was accommodating all the members of each company and showcasing them properly. Other than that, we all worked really well together. None of us had an ego or anything. We were in it together.

H&D – And scheduling!  Making sure that our actors and crew are having fun, learning, getting enough rehearsal time AND allowing for rest and their non-theatrical lives is very important to me.  With an ensemble this large it was definitely an obstacle that I believe we tackled well.

Boston Actors Theater (BAT) – Since we all function differently as companies, it was challenging to adjust to each other’s administrative styles, but all came together and what was a challenge to start actually became an asset because we all have different strengths as well.

H&D – Yes, all of that and I believe what interested H&D was that the script felt like a song that allowed for our actors to move around the stage in dance-like motions.

Why do you think Polaroid Stories received as many accolades as it did?
HMT – Personally, I believe it was Joey and Elise’s approach to the script as a dance piece. The seamless movement they created was a visual feast for the eyes.

H&D – I also feel like our ensemble took special pride in their work and each others’.  They were really happy to be playing these street kids.  The script is difficult.  There’s a lot going on between the two different worlds Iizuka has them playing in.  And each member really played with that.  They did their work inside the rehearsal room and out.

BAT – I think we were able to compile some of the best fringe talent in Boston by coming together. We were also able to showcase each company’s talent making for an extremely strong production.

What was unique about this particular production?
HMT – The ensemble we added in and, again, the movement/dance!

BAT – We tried to depend on the talent of our actors and directors rather than the technical aspect of theater. We let the text speak for itself which resulted in a raw type of feel that struck a nerve of those watching.

Were most of the actors already involved with one or more of  the three companies?
HMT – Most of the actors sort of bled through, if you will. Most had already worked with all of us, except for a couple of the women in the ensemble. We all had a really great rapport and that probably contributed to the success of the show as well.

BAT – Each company did bring actors to the table, but we also brought in some new faces that none of us had worked with before.

H&D – I pre-cast four of the roles.  We had a crazy number of actors audition for the remaining 7.  I wanted actors who were fearless, comfortable with their bodies and who would challenge the group.

All of your companies have collaborated in the past with different theatre troupes. What makes for a good collaborative project?
BAT – Communication. It also helps to already have a good relationship personally. Luckily, Joey, Mikey and I have worked together before on Joey’s production of When Moment’s Hung Before, produced by BAT a number of years ago. I directed, Joey wrote and performed, and Mikey performed, so we know each other pretty well.

HMT – Trust and open communication! Never keep anything a secret and be honest. Have the hard conversations if necessary. If you are truly friends, you’ll get past the business side.

H&D – Also realizing that what I do best isn’t necessarily what Mikey does best and vice versa.  Passing the ball to someone who can do the job the best is the BEST for the production.  We all knew that going in and it was awesome.

What encouraged you to start your own theatre company?
H&D – I had met a few people who shared a common feeling about theatre, design, movement, experimentation, and work ethic.  And while we knew we weren’t reinventing the wheel, we wanted to add something a little different to the Boston Fringe Theatre Scene and I believe we’re doing that.

HMT – Frustration! Not because we at HMT weren’t getting roles, we just weren’t feeling fulfilled. Acting was becoming a chore rather than fun. We needed to find a Happy Medium (heh!) where we doing the best work possible but not compromising who we were as individuals.

BAT – When I first came to Boston in 2004, there was a need for a company that produced local playwrights and used local actors. I produced one summer and it caught fire; BAT has been going strong since then.

How do you see your company contributing to the Boston theatre community?
HMT – HMT has become very charity-oriented over the past year. Whether it’s collecting canned food for homeless shelters, donating money to various causes (The It Gets Better Project, Boston Area Rape Crisis Center, etc.). We want people to see our shows, yet still give them the feeling that they’re not only helping us but also a charity!

H&D – We’re trying to get as many young, talented, up incoming actors a chance to get involved while also catering to the actors who’ve worked hard and continue to grow.  H&D Productions is also trying to provide challenging and exciting work to satisfy a hungry Boston audience.

BAT – We have tried to constantly use new actors every season, as well as producing mostly local playwrights, while picking themes that speak to Boston audiences. We also try to support other companies in town by co-production and helping to market their shows. We are very active in StageSource and I have served on some panel discussions for them presented to the theater community. We also have a “Kid in Residence” program that gives workshops to children. These workshops help them become more professional for other companies in the future.

Relatedly, what makes your company and productions unique?
BAT – We mostly produce works by local playwrights and every production has a cause within the community that we donate to. For example: we donated over $1,200 to the Adult CF Fund at Children’s Hospital from our SPF12 production.

HMT – The amount of fun we have and the bond of trust that we build. Look, we know we’re not the Lyric or the Huntington or even a Company One for that matter. We don’t pretend to be, either. We just want to do something awesome and make no apologies for it!

H&D – Totally, Mikey.  We try to add our H&D flavor to every single one of our productions.  But the experience should be fun for everyone involved especially our audience.

What projects do you hope to produce in the future?
H&D – So excited about Psycho Beach Party this summer! And coming up next we’ve got Hello, Dolly! – Our first musical.  Next year H&D will be doing The Crucible and Nocturne by Adam Rapp.  And we’ll have “SEX FEST II” cause you know we like to get down and dirty.

HMT – I’d love the produce a musical with these people! We’d have a blast. Maybe HAIR or Cabaret? On the horizon, HMT is doing Black Comedy, and then we’re pseudo-collaborating with H & D on Psycho Beach Party.

BAT – I’d like to do another work by Mary Zimmerman as well as more productions by local playwrights.

What is the most fulfilling part of owning or starting your own theatre company?
HMT – Through all the blood, sweat, and tears, it’s about the patrons. If one person leaves changed for the better, we win the game.

H&D – Building a loyal audience and being loyal to them.  Showcasing my talented actor friends.  Introducing new theatregoers to our work and letting them know about the vast fringe scene.

BAT – Seeing the work you love being produced and seeing the audience’s reaction to the work.

What is the biggest challenge about owning or starting your own theatre company?
HMT – Like in any business, personalities can have a tendency to clash; however, if you keep that line of communication open, it usually smooths itself out.

H&D – Asking for help.  I often forget I have talented, hard-working company members who can do most of the work I can do.

BAT – The financials, space management, doing what you love and being able to stay open and cheap for the community.

Are there any theatre companies after which you model your own company?
H&D – Actually, I had been working as choreographer for the Foxy Action Groups “Mr. Goodbar”.  I loved how we’d have this huge QUEER party; people dancing, drinking, taking off their clothes and then this show would happen.  It was really exciting. I also love drag queens shows and watching modern dance pieces that tell a story.  I think I was more inspired by people, scenes, different parties, feelings, and lighting than a particular company.

HMT – Truth be told, not really. It’s not us being snobbish, we just wanted our own stamp!

Do you have any hilarious/interesting/embarrassing theatre stories? Can you share one of them?
HMT – Oh there was just that one time where I fell down a flight of stairs. No big deal. At the time, I was mortified. Looking back on it, I actually laugh a lot!

H&D – I’ll never tell.  But if you can get Mikey or Deirdre Benson to open up, I’m sure they could fill a book.

What is one thing that you think our readers should know about your company or production?
HMT – We’re a heck of a lot of fun and we leave all pretenses at the door. Come play with us!

H&D – We’ve got an exciting season and a half coming up, and we can’t wait to share it with the world!

BAT – Coming together to produce a production not only helps your companies out by splitting cost, it also bring many talents together to make a unique production many will love. Support the community and only good things can come out of it!