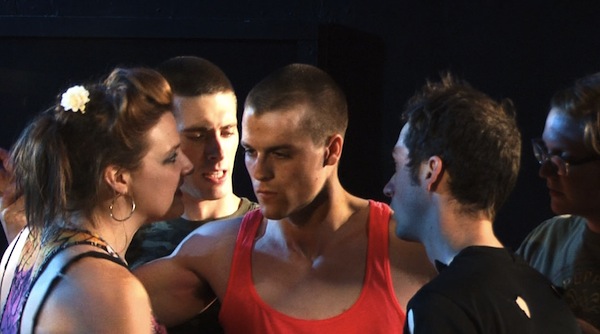 Stop. Go see this show. It’s not often that I make a frank endorsement for a show. Here it is:

Three of Boston’s hottest fringe theatre companies have teamed up to bring a fantastically executed production of Naomi Iizuka’s Polaroid Stories to the Boston Center for the Arts. The Boston Actors Theater, Happy Medium Theatre, and Heart & Dagger Productions bring some of Boston’s most talented actors together under the helm of the incredibly talented and creative Joey C. Pelletier (what is he not involved in this summer?!) and his dashing co-director Elise Weiner Wulff. Polaroid Stories is a modern re-telling of some of the most classic Greek myths, though this synopsis is hardly indicative of the emotion and energy in these stories of corruption, redemption, loss, and love. This cast’s willingness to go for the uncomfortable heart in each and every moment makes this play a breath-taking exploration of the human psyche and experience.

This show is as much about the individual journeys and experiences as the movement and relationships among the characters. The ensemble explodes with talent, each member eager and capable of telling a full story; I am always a fan of making your character the protagonist and each ensemble member accomplishes this difficult task without detracting from Iizuka’s delineated protagonists. Mikey DiLoreto, coming off a very different production (Happy Medium’s The American Plan), plays D, a bitter and resentful demi-god who rules the night from his throne (a toilet). DiLoreto is the perfect choice for this production’s D, as he is not afraid to go for the difficult choices, making every moment matter for this character’s struggle to exist and dominate within his world. DiLoreto’s ability to take chances brings out the best in his scene partners, specifically Michael Caminiti as Skinhead BOY, an otherwise abrasive but forgettable character who sparks in his scenes with DiLoreto.

An actress who needs no help from her scene partners brightening each scene with her presence is Kiki Samko as Persephone. Samko cleverly navigates the brashness and insecurity of this broken woman, often creating the perfect blend of need and aloofness. Given the breadth and depth of her work, this character may be Samko’s best role to date. Equally heartbreaking is Danielle Leeber Lucas as Philomel, the natural storyteller of Greek mythology. Lucas’ voice is stunning in her chilling rendition and reprises of “Blackbird” and we always return at key moments to this character’s navigation through this dark and scary world.

Thank you, Michael Underhill for being in this production. Few actors could make me fall in love and despise and pity and love again the man who is Narcissus. I fell in love with Underhill’s acting in Crave earlier this season, and he’s surpassed my expectations once again. He captivated my attention with his heartfelt monologues, but it’s his scenes with Elizabeth Battey (who plays the cleverly written Echo) that bring Underhill to his apex. Battey and Underhill have one of the most unique chemistries and stories I have seen in a while, both understated and alive in realness.

The most familiar story is between Melissa DeJesus’s Eurydice and Luke Murtha’s Orpheus. DeJesus’s every movement is stunning and, from the beginning, I knew she was someone to watch. Her gift for storytelling through her body is eclipsed only by her passion for her character and her words. Her dazzling personality shines through as she runs towards and away from Murtha’s whiney, but endearing Orpheus. Murtha has a challenge which he mostly rises above; Iizuka did not seem to write Orpheus in the traditional sympathetic tones of a lost lover and Murtha’s natural, boyish charm saves his performance in many instances from falling flat, or, even worse, into predatory territory. In Iizuka’s tale, Orpheus is a scorned lover who won’t take no for an answer and this determination fits Murtha’s persona perfectly, leading to some brilliant moments with and without a guitar. And once again, Jesse Wood steals the show with G, a very different character from his previous endeavors as The Mechanic in Cruel Botany. Wood is still charming as hell and his scenes are palpable with depth and sincerity, especially opposite DeJesus. Their scenes are truly some of the best, which is a difficult call to make with this many stand-out performances.

Overall, I believe Pelletier and Wulff’s directing makes this show the “must see” production of the summer. By assembling a team of incredibly talented actors who sparkle and pursue their roles with passion, Pelletier and Wulff move past the text to explore the emotions behind the stories, expertly told in movement and voice. Production Stage Manager Samantha MacArthur more than capably lends her talents to this production with a perfect pace for the whirlwind show. Especially talented is Michael Clark Wonson, a newcomer to these companies whom I hope will stay around because his lighting design is too amazing for me to express in words. The lights are mildly distracting because they are so brilliant but they perfectly complement Sean A. Cote’s set and DiLoreto and Wulff’s costumes.

I can’t recommend this production enough, as I came away smiling through tears. The mixture of emotions is the perfect catharsis and the best review I can give this production. Somehow the stars have aligned for these theatre companies to collaborative with remarkable success. They truly deserve others to echo my praise and the support from the Boston community for their fringe theatre companies. See this production tell classic stories with a rough-around-the-edges motif on July 11 and 12, at 7:30p.m., and July 13 and 14, at 8:00p.m., all at the Boston Center for the Arts.