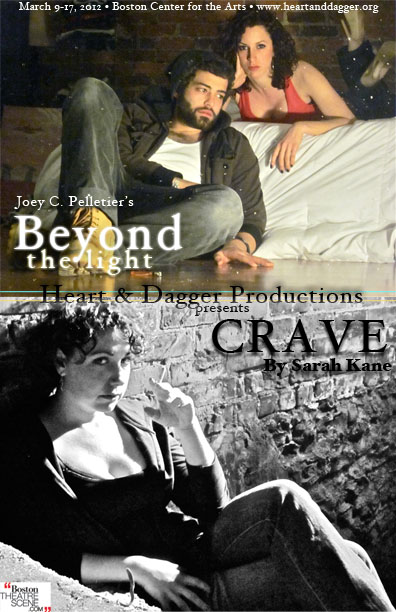 I appreciate when theatre companies aren’t afraid to tackle the tough topics. Last weekend, I had the pleasure of seeing two brash and honest plays by Heart & Dagger Productions.

Beyond the Light is a new play by theatre “jack-all-trades” Joey C. Pelletier. His venture into playwriting is rewarding for both the company and the audience, as he creates a poignant story of life, its losses, and its beauty. Pelletier directs his own piece and infuses it with particularly effective choreography. Indeed, much of the short play is told through dance. Normally, I think something is lost in translation when actors transition from speech to movement, but Pelletier and his troupe keep the action moving with their feet and faces.

At the center of this dark turn is Graham, empathetically portrayed by Jesse Wood. At times, Graham’s story can border on the macabre, especially with the comedic portrayals of DF 1 and DF 2 (artfully created by Daniel J. Raps and Christina Malanga, respectively). Though perhaps a little stagnant in performance, both Rap and Malanga find the humor well and navigate the beginning of the show quite effectively. The stand-out performance, however, is from Louise Hamill as Graham’s sister Grace, whose monologues/eulogies are particularly stirring and purposeful. Pelletier’s choice to use monologues sparingly but usefully is a great help to the production.

Equally successful are the scenes between Graham and Cate (his user-girlfriend, played with moving sincerity by Elise Weiner Wulff). I have never seen Wulff so good- her scenes with Wood are palpable and they run the emotional gamut. The therapy scene allows a full range of acting abilities to shine, from comedic to  tragic, all of it grounded in sincerity. While I found the dance number a little too silly for my tastes, I appreciated the dramatic structure that Pelletier employs by using such a comedic scene between multiple more depressing moments. Hot Mamma (a ridiculous name for any character we are supposed to take seriously but wonderfully acted by Kiki Samko) dances into our hearts and her character shows the most growth in her few scenes. Wood’s chemistry with his best friend, Gabriel (played with boyish charm by Christopher Nourse) is also especially effective.

I had some trouble, towards the end, discerning what I was supposed to take away from the show, but I appreciated my confusion and the inherent ambiguity in this play’s conclusion- whether intentional or not. I thoroughly enjoyed wrapping my head around the creative story-telling in Beyond the Light and look forward to seeing where it goes from here in production and revision.

Emotionally exhausted, I settled in for Sarah Kane’s Crave, a piece that I had not read since college but had stuck with me. Crave is a cult classic among the British “In Yer Face” movement aficionados, and for good reason. The play is a stirring tale of some of the more taboo subject matter that most playwrights and theatre companies won’t touch. Rape, mental illness, depression, suicide, and unrequited love are all present in this short, but dynamic work. Melanie Garber does an extraordinary job directing this difficult piece. Given no stage directions in the script and very little indication about who lines are directed to among the four characters, Garber creates a world of mayhem and confusion with purpose and style. Particularly impressive is how she helps actors develop personalities from their “lettered” characters. I’m a sucker for one of the key motifs Garber choses to emphasize: “What happens to us if we are so consumed with our past that we cannot experience our present?” (taken from her director’s note). Her actors personify this theme with excellent success.

At the center, is C (played with superb depth and empathy by Abigail Matzeder). This is C’s story, and Matzeder commands attention onstage with her strong presence and purposeful delivery. What I liked most about Garber’s Crave, however, is that all of the characters are strong and confident enough to make the story about them. B (played with purpose and swagger by Michael Underhill), is exceptionally effective in letting the audience understand and empathize with him, despite some of his more morally reprehensible decisions. Underhill’s ability to move moment-to-moment through this difficult script is impressive and captivating, and his scenes with Matzeder  are sharp and moving. I appreciated Meredith Saran, who played M, and her commitment to the character, though I found her portrayal a little stilted and one-dimensional; though I couldn’t tell if that was the role, the actor (or director)’s choice, or the actor’s limitations. I think my annoyance came from thinking that she was a particularly strong actor who seemed stuck in one or two “tactics.” Terrance P. Haddad appears to have a similar issue, though he benefits from very strong scenes with Matzeder- they have quite good chemistry, which brings out the best in him, though I found his monologues lackluster.

Both Beyond the Light and Crave are highly enjoyable, though not for everyone’s tastes (I had to emotionally prepare myself for the depressing and shocking evening of theatre). The actors in both productions ranged from good to outstanding, Making Heart & Dagger’s current double bill a success.