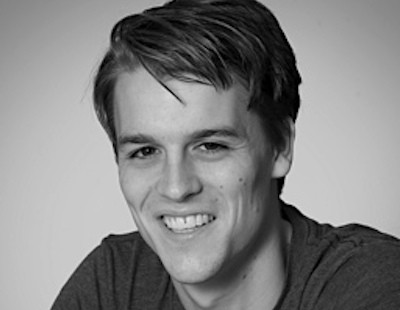 Versatile and returning My Theatre Award nominee Michael Underhill earned laughs and tears, as well as a My Theatre nomination for Best Actor in a Play, with his emotional performance as C.B. in Happy Medium Theatre’s Dog Sees God: Confessions of a Teenage Blockhead. Here, he joins us to talk about what made the production special for him, what he credits with his success as a theatre artist, and where he’s going on his honeymoon with the beautiful My Theatre Award-nominated actress, Kiki Samko!

Michael, thank you for joining us again for our Nominee Interview Series. Can you tell us about some of your projects and productions since your last interview?
Let’s see, since we last spoke, I have performed with Happy Medium Theatre in Black Comedy by Peter Shaffer; understudied the role of Proteus in Two Gentleman of Verona with Commonwealth Shakespeare Company; performed the roles of Hero and Werewolf in Angela Carter’s Hairy Tales with imaginary beasts; and played my first baddy in a Winter Panto in the role of Sir Wantinvain in the original adaptation of Rumplestilitskin, or all that glitters with imaginary beasts .

I also directed my first full-length play, Puss in Boots by Angela Carter, as part of the Hairy Tales project in the fall with imaginary beasts.

Why did you choose to participate in Happy Medium Theatre’s production of Dog Sees God?
I was asked by one of the founding members of Happy Medium Theatre about a year before rehearsals started to keep that slot open for a show. He told me a little about the show and who else he planned on being involved. Not only was I fascinated by the challenge of tackling such an iconic character as Charlie Brown (C.B.—as a teenager no less), but I was very excited by the prospects of the cast and creative team. Going into rehearsals, I knew that everyone in the show was part of a very close circle of collaborators with whom I had worked before. Being able to step into the first rehearsal full-stride really raised the bar for the production as a whole.

What was your favorite moment as C.B.?
Oh! How could I choose!? Whether it was my dog’s casket being flung from twenty feet in the air to ground at my feet, or having an interpretative dance to that song that everyone knows, or listening to all my cast-mates read me a letter from my Pen Pal while being scored perfectly by our sound designer, to listening to how much people connected to the show on a personal level—it was all a truly special experience.

In your last interview, you gave us a teaser about this production! You mentioned the trust and loyalty of the cast in making the production possible. Can you tell us more about how you developed this trust with your fellow cast mates? What did it mean for the production?
Starting from Day One, we all knew exactly what buttons to push on our fellow actors—in a good way. We have been working together, hanging out together, literally putting up sets and taking them down together for three or four years now, so we had no hesitation or barriers when we are together on-stage. Because we are such close friends, the conversations didn’t stop in the rehearsal room—it carried out to the bar, on the ride home and even across late-night e-mails that kept us up at night!

What was the most difficult part about Dog Sees God for you? What was the easiest part?
The most difficult thing about Dog Sees God for me, personally, in all honesty? Two of the characters names! Two of the characters you may be familiar with, were named Patty and Marcy. They were in every scene together, attached at the hip. I didn’t actually reference their names until a tirade I unleashed towards the end of the show. The script called for me to turn them and say, “Marcy, Patty!” but throughout dress rehearsals and I think even a few of the first shows(!) the word that came out of my mouth was “PARCY!” I eventually settled for just saying “YOU TWO!” Apologies to Bert V. Royal if you are reading!

The easiest part was settling into the show once the first riff of music started for our entrance. Everyone in the cast created such a clear sense of the world of the play, all I had to do was look them in the eyes and breathe.

Is there any role or production that you wish you could do again? Which? Why? What would you do differently?
I don’t think that I would actively seek out any particular role to play again, but if the opportunity came around, then I wouldn’t actively reject a role that I have played before. I bring a different version of me to each production, a person who has a completely new set of life experiences that will affect how I approach the role, and how the words affect me when I read them and when they come out of my mouth. I think Shakespearean roles are especially delicious to repeat because both form and concept can vary wildly with his language.

So, you’re getting married (congratulations!) to the beautiful and talented Kiki Samko. You mentioned in your last interview that you would love to play a serious romantic lead opposite her (which needs to happen, Boston directors and producers). Do you have any more ideas on which shows and roles that you could do?
Much like when I saw Kiki walk into a room for the first time, I think we will both recognize immediately when the right play comes around. There is something special about discovering a play for the first time that has come to you from seemingly out of nowhere. Our eyes and ears are always open, but some of our favorites include Dying City by Christopher Shinn and Fifth of July by Lanford Wilson.

You’ve also taken an active role in the management of theatre companies. Can you tell us more about that work; what do you do? For which groups do you do it? What successes/set-backs have you had?
I serve on the artistic board for both imaginary beasts and Happy Medium Theatre. With each of these roles comes an extra layer of responsibility to put in a helping hand in administrative, marketing, and production roles in addition to our work on stage. In return for that commitment comes a voice in the room where artistic decisions are made.

The biggest successes I have experienced have been developing a core of theater practitioners with whom we work over and over again, and have developed a shorthand that helps us keep our passionate motivation to create invigorating theater moving at a speedy pace. I think the only shorthand that comes with it is the same shorthand that anyone who creates theater and has skin in the game experiences. It is not an easy model to predict how to market live theater, even in a thriving artistic community like Boston. Any perceived struggle, however, is far out-weighed by the joy experienced in the rehearsal room and on stage.

What or who inspires you?
I owe my hard-working nature and determination to my parents. They taught me by example how to battle adversity and never to give up reaching for my dream.  I could not have asked for a more supportive family. That motivation and passion is mirrored by my fiancée, Kiki. It is incredibly satisfying to watch someone else whom you love grow and succeed, thanks to hard work, willpower, and talent. She inspires me every day to get the most out of the next twenty-four hours, then get up and do it again.

Do you have a celebrity crush?
I don’t know if this constitutes a crush or not, but I would give anything to sit down and have a beer with Jeff Daniels.

I’m stealing this question because I know you’ll have a good answer: We just woke up in jail together (sorry!). What are the first four words out of your mouth?
My fault or yours?

You’ve a very smart and dedicated actor. Have you ever thought about directing? Why/why not? What kinds of stories would you tell? Any specific plays?
I just had my debut as a director with Puss in Boots, part of the Hairy Tales project with imaginary beasts. I was very fulfilled by it—and I hope to do it again. I really enjoy responding to an actor’s instincts and working together with them to find the spine and skeleton of the show. As I told my actors too many times during that process: “We’ll find the meat later!”

I’m very interested in pursuing similar work to that of imaginary beasts—pure theatricality and imagination. But I am also very drawn to theater that is addressing a current political or social climate. I am intrigued by what the Group Theater tried to accomplish in the ‘30’s. I would love to mirror their aspirations to raise the theater to newfound heights.

So, Michael, you’re a talented, super committed, easy-going actor. What’s your secret? How do you continue to impress audiences and critics? How do you stay so grounded during the stressful rehearsal and production process?
Wow! Such nice words – thank you! As far as a secret? I don’t think very far ahead. Which is difficult for me because it is a natural instinct to set things in stone five years out—a task that is truly impossible in the theater. I try to take rehearsals, productions, and life one day at a time, and not let any one thing linger or bog me down.

If cost were not an issue, where would you live? With whom (hopefully Kiki makes the list!)? What would you do?
If cost was no issue, I would live with Kiki in a large open studio in the South End of Boston, with a summer house on the Cape! The Studio would double as a rehearsal and, perhaps, a performance space! I love Boston, and I love being a part of the next generation of artists bringing culture to its residents.

Do you have any upcoming projects or productions?
Besides the wedding! I have two final productions before the summer. I will be playing Actor #1 in Lebensraum by Israel Horovitz with Happy Medium Theatre, and I will be directing for Heart & Dagger’s upcoming SexFest II. Then off to married life and Cancun!

Do you have anything else that you want to share with our readers?
Keep seeing live theater! We love what we do, but we couldn’t do it without the support of our wonderful audiences!