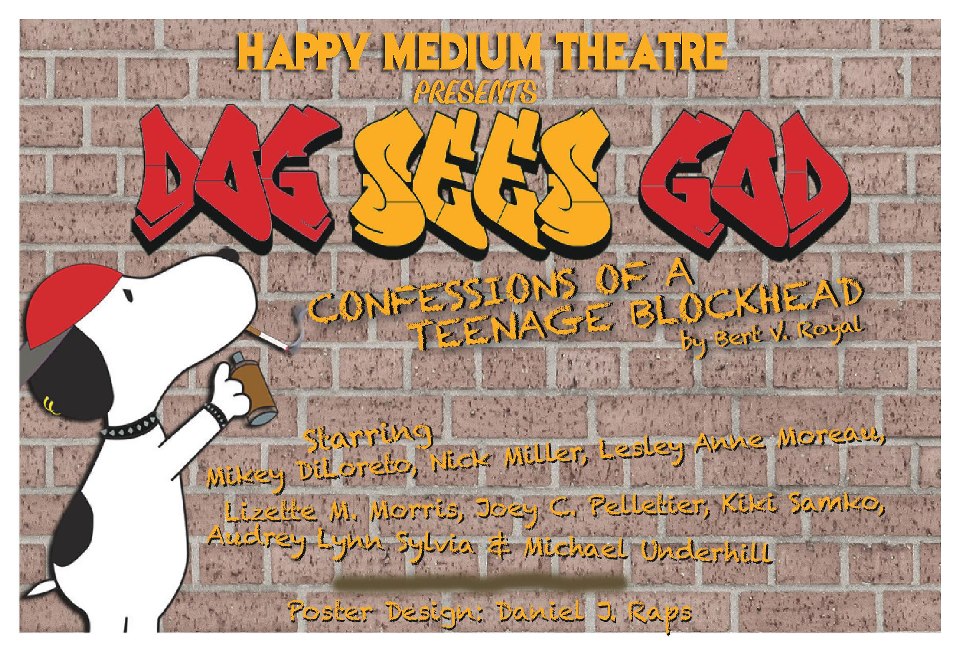 Every once in a while, you find a show that moves you; the show inspires you to lead a more purposeful life. For me, I knew that Dog Sees God: Confessions of a Teenage Blockhead was the kind of show that begged to be seen. I directed the show in college and I will forever remember how touched I felt when I first read the script. Written as a unofficial parody of Charles Schultz’s timeless comic strip, Dog Sees God explores some of the most timely issues facing today’s youth. I was impressed and enthusiastic that one of my favorite Boston theatre companies, Happy Medium Theatre Company, decided to put their own interpretation on this play. To begin, their heart, passion, and talents are unmatched in this stunning production. They have assembled some company favorites to bring these loveable characters to life before our eyes, tackling the difficulties of growing up in the twenty-first century with creativity, conviction, and empathy. To say that this production and their performances were a delight and an emotional experience does not do their hard work justice.

At the center of this play is CB, a modern-day Charlie Brown, played with the perfect amount of confidence, raw emotions, confusion, and heart by Michael Underhill. Underhill, a 2012 My Theatre nominee, is at his best in this role. From his opening to closing monologues, he provides such a steady and courageous performance that you can’t help but want to give him a hug. He is an inspiring role model as both an actor and performer; his commitment, not only to his own role, but to interacting with his fellow castmates is stunning scene work. He is at his best with Kiki Samko who plays CB’s Sister, our reimagined Sally. Samko is a whirlwind of energy and passion, bouncing from identity to identity as she skips from scene to scene. This energy is perfect for this show and she finds each moment to make it memorable and meaningful for CB’s Sister’s journey towards self-discovery. While many acknowledge her “platypus performance” as her most rewarding, I will never forget the beautiful simplicity of her final moments with Underhill at the end of the play.

Underhill also excels in his short moment with Van’s Sister, our pyromaniac Lucy, played by the director Lizette M. Morris. Morris found the ideal balance for Van’s Sister, discovering moments and making choices that even I did not know existed prior to her performance, despite the fact that I’ve read and directed the play. Her ability to switch from sincerity to comedy coupled with her magnetic chemistry with Underhill made for a fresh and thought-provoking scene, perfectly timed in the performance. Nick Miller makes a hilarious Matt, the reformed germophobe Pig Pen, and he manages to convey just enough questioning for us to wonder what’s hidden behind his rage and sexual deviance. Miller’s Matt is a strong contrast to his last role with Happy Medium Theatre, but he brings the same energy, making him an actor to watch for future productions.

Audrey Lynn Sylvia and Lesley Anne Moreau, as Tricia and Marcy respectively, surprise and delight in their performances. They both manage to find the right balance of caricature and personality, rarely moving into the absurd, and instead keeping the heightened reality of their almost farcical level of hysterical laughing and bitchiness in check. Morris deserves recognition for her guidance as director in walking this fine line with her cast’s help. The play, and this production in particular, works from its ability to switch from comedy to drama. Mikey DiLoreto keeps things in check, mostly focused on his comedy but his somewhat sincere moments with Underhill are warm. DiLoreto and Underhill have some nice moments, which only accent the long history between these characters and actors.

I’ve left Joey C. Pelletier, as Beethoven, for last. In some ways, Pelletier had the biggest challenge, but he was up for it. Beethoven is one of the key roles in the show; he stands for far more than the shell and memory of Schroeder. Pelletier does a good job of capturing his turmoil and angst. But what Pelletier does a great, nay even superb job of capturing is the simple feelings of rejection, heartache, love, and truth. Pelletier is at his finest when he just does, with no forethought, planning, or acting. His natural instincts compel him towards the right moments. Underhill brings out the best in his scenes with Pelletier with a kind and supportive understanding between the actors and characters. Underhill’s natural calm onstage helps realize Pelletier’s instincts for the drama and comedy in his Beethoven, creating more than a few spine-chilling moments.

Morris’s directing brings out the best in some of the company’s best performers. Her vision, however, is where she earns well-deserved accolades. She has constructed a world filled with teenage angst and power, but she also filled her world with so much hope and determination that I really believe that it can, and will, get better. We need more young directors willing to take this strong stance on social and political issues. We need more companies who empower their communities to discuss timely topics. We need more artists who are committed to serving their need to educate and discuss. Happy Medium Theatre Company’s production of Dog Sees God may have closed, but I know that my own experience with some of the material’s heart-wrenching and compelling scenes and topics will not be closed.