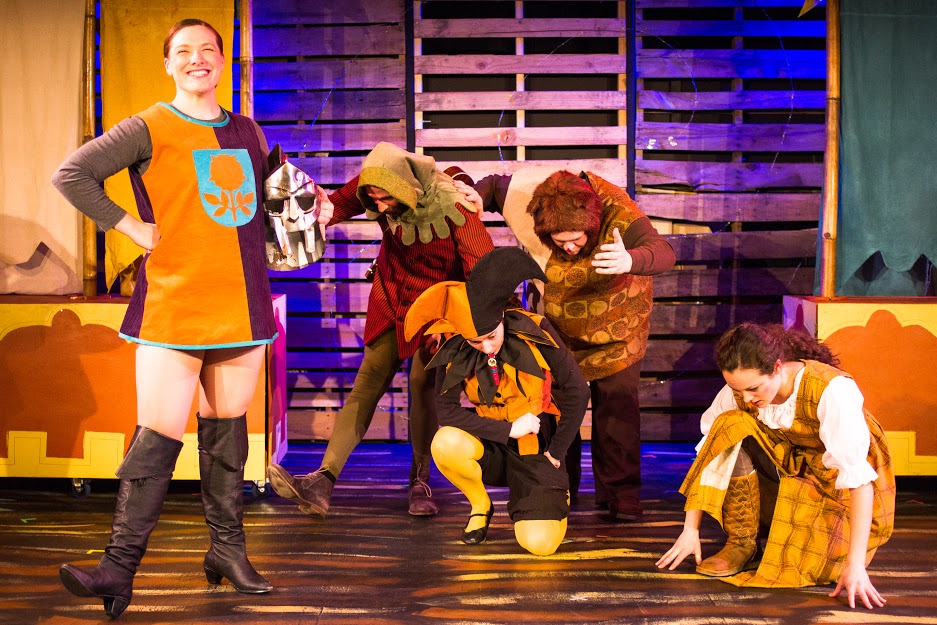 Once upon a time, Brian went to see a fringe theatre production on a rainy Saturday; he was tired and grumpy. He was four shows into a long stretch of reviewing, and he just wanted to sleep. However, Imaginary beasts delights, surprises, and thrills with their 2014 Annual Winter Panto, Rumplestiltskin, or All That Glitters. This production truly shines under the artful, always intelligent, sometimes naughty but always nice director Matthew Woods. Once again, Woods assembles a top-notch cast and crew, and they play to great effect for audiences of all shapes and sizes.

A panto comes from the English, a pantomime. Known for its broad physical comedy, musical elements, gender-bending actors, and original adaptation of a traditional fairy tale, a panto is a wintertime favorite, rarely seen in the States. Imaginary beasts bring all of this charm and magic, and more, with this year’s panto. Loosely basing their panto on the classic tale of Rumplestiltskin, Imaginary beasts weave their own narrative, playing on some classic archetypes, including the quest, the poor family, the evil advisor, and the silly animals. Much of the company’s success, however, derives from their ability to play to multiple audiences. Seated on the floor, children watched with adoration and wonder as Bruin, the Bear, played with comical nonsense by Cameron Cronin, and Bumble, the Humblebee (with outstanding use of a kazoo for communication!) played by Beth Pearson created manic mischief and shenanigans reminiscent of Saturday morning cartoons. Bryan Bernfeld as Birtle, the Bard, is charming and likeable as our quirky narrator whose winning smile reminds us all, despite any fairy tale “evil”, that everything will be a-okay. These three represented the more “G-humor” for the children, while The Weird Sisters walked the line of pleasing young and old with their antics. Lead by Lady Marmalade, played to hilarious effect by Mikey DiLoreto, Molly Kimmerling as Lady Glory and Amy Meyer as Lady Honor are bizarrely wonderful addition to this fairy tale. With Edward Gorey mannerisms, and off-kilter humor, these “ladies” provide a delightful twist on the classic use of three “witches,” complete with audience participation, contemporary references (what I wouldn’t give to twerk with those three), and musical numbers to boot (their opening number was delightful, while their “Goldfinger”  was a golden surprise which quickly lost its luster). Yes, these three couldn’t get enough stage time as they played on each other’s humor, energy, and quirks with ease.

In the court, we had a wonderful group of My Theatre favorites. Kiki Samko (what can this girl NOT do?!) takes a gender-bending turn as the 28-year-old Prince Florin with thigh-slapping fun and the winning smile which perfectly parodied the princely archetypes. Her father, King Guilfroy, the Good, was played with outstanding physicality by William Schuller, who only seems to improve with each new production. Michael Underhill impresses, as always, with his nefarious Sir Wantinvain, the King’s trusty-turned-jealous advisor, who provides consistent energy and liveliness to each of his scenes. The children loved watching Underhill transform Schuller into a sniveling and evil puppet, shouting “Boo-Hiss” with increasing demand. Underhill knew exactly how to build and coax the audience’s attention and participation with his lines begging for a reaction and response from both children and adults alike. Daniel C. Raps provides wonderful snark and sass as Hark, the Herald, displaying some mean calves and delightful one-liners. These scenes were truly magical to watch.

Equally magical was Sarah Gazdowicz as Myrtle. With a name like Myrtle, you know exactly the kind of character that Gazdowicz will play, and she surprises and delights for the entire performance, playing excellently with Noah Simes’ Mistress Curdle, a medieval take on Mama Rose. Their scenes escalate into the perfect level of broad-level comedy while allowing many poignant themes of feminism, being yourself, and choosing your own destiny to shine. Woods and his cast create a play that works on so many levels. My best comparison is a theatrical Shrek; the panto has physical mayhem, several strong storylines (though they may have run a little long towards hour 2), and beautiful messages for young and old. Many of the characters play to the children with a call-and-response, while providing the adult audience with wink-and-nod innuendos and cultural references. Woods truly outdoes himself with the help of his cast, especially since Woods delights as Rumplestiltskin himself, whose costuming and effects are hilarious and brilliant.

Joey C. Pelletier is at some of his finest as Dame Gilda Lily. With fluttering golden eye-lashes and flattering dresses, Pelletier charmed the pants off this reviewer and left the kids stitched with laughter. Pelletier allows any inhibitions to be checked at the door, and he glides through his scenes with exuberance and poise, perhaps embodying the broad panto humor the best and creating delicious improvisational moments with the audience (though I felt bad for the poor kid who was reduced to the name “Bob” for the entire performance). Unfortunately, not everyone in the cast understood the broad panto style, as Caroline Rose Markham’s Marigold floundered in awkward stumbles. Lacking some of the humor and vivacity found in the other characters, Markham’s Marigold is played so “straight” that I wondered if she was in the same production as the other cast members. Everything is performed so earnestly that it felt, well, off-putting within this zany world. Fortunately, she had other cast members to coax some humor and life out of her stilted performance. That said, Pelletier and Markham’s mother-daughter relationship never really worked for me, though it was a minor point in the story. The odd part was that their story was a large part of the original Rumplestiltskin story, which comprised maybe a quarter of the play’s total running time. I don’t know whether to consider this decision a “bad” choice because the rest of the show is so delightful and original; however, for audiences expecting (as I did) a six-minute panto, buckle-up, pack snacks, and get ready to laugh because you’re in for a two-plus hour treat.

Surprisingly, the technical elements and designs are as winning as the actors. The costume design by Cotton Talbot-Minkin is beautiful and perfectly executed for the cast. The detail, colors, and fit extenuate each of the actors’ characters to wonderful effect, particularly Pelletier’s Dame Gilda Lily (“Hi Lily!”) and Woods’ Rumplestiltskin (who played the show from his knees with a gorgeous miniature costume and sweeping cape). The set by Deirdre Benson (one of the best stage managers in Boston’s fringe) and Woods was simple, but wonderfully pleasant and effective, changing the scene and location at a moment’s notice with the help of the ensemble.

In a word, my gloomy Saturday was magical through the golden performances of this cast. While those familiar with English panto may criticize them for bastardizing the form, I appreciated the American touches on this classic style and the unique interpretation that Imaginary beasts brought to this fairy tale magic. I wait with silent wonder to see what other playful interpretations that Woods can develop because, when it comes to Boston fringe, Imaginary beasts truly can spin straw into gold.