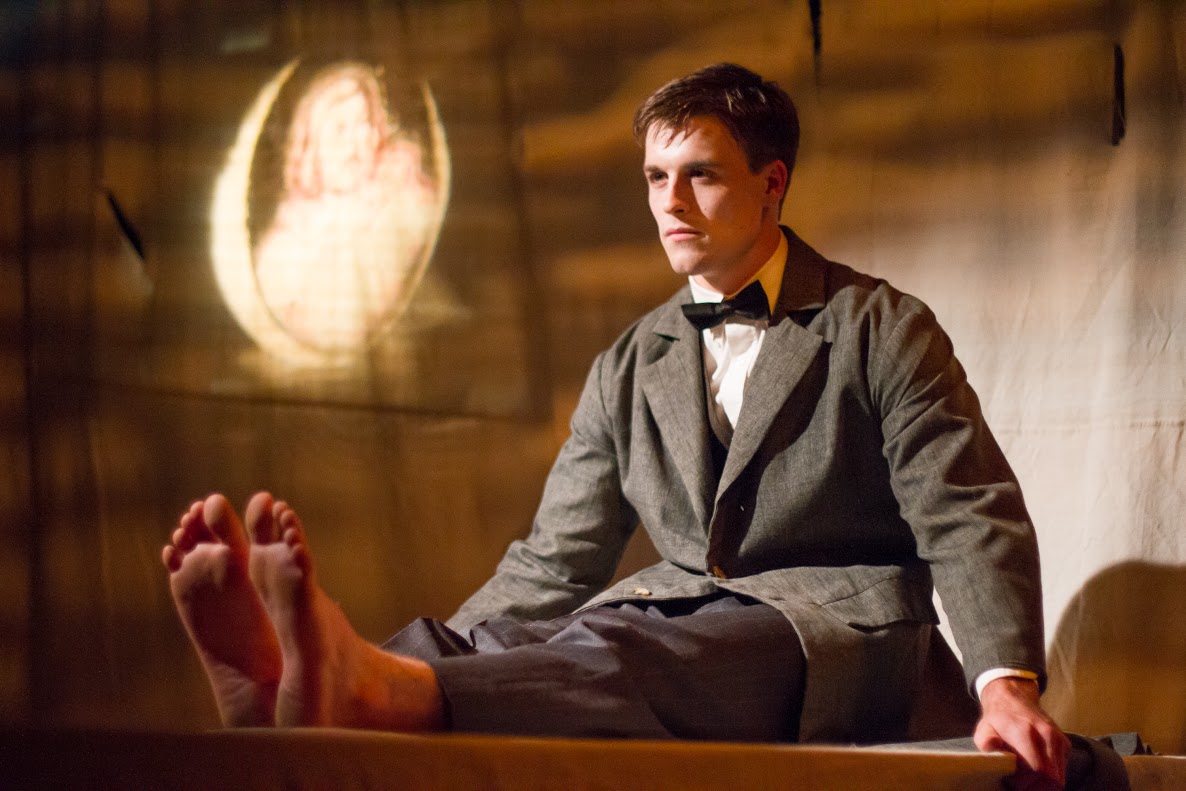 “How will they stage a radio play?” I had no doubts that a creative theater company could very well stage a radio play, especially if the play in question was written by Angela Carter, the late British woman-of-many-letters, a novelist/journalist/dramatist/critic known for drinking deeply from the Gothic and the fantastic in literature, and infusing much of her work with it. Such a body of work offers plenty of rich imagery to choose from, to be sure, but how would a staging evoke the qualities of a radio play? The decisive role of sound effects, the idiosyncrasies of a narrator’s voice and that of the characters…in other words, the elements that cause visual representation to hinge on what we hear rather than on anything we actually see. Done simply, a production could merely forge visuals from the descriptions in the script, as one would do with any play. A relatively simple task which would probably yield simple results. The show imaginary beasts performed on October 4th, opening night, was certainly no simple result. Hairy Tales, in no uncertain terms, awed me with its artistry and execution.

The radio plays in question are Vampirella and The Company of Wolves, reimaginings of the fairy tales Sleeping Beauty and Little Red Riding Hood, respectively. Carter uses the seemingly innocuous genre of the fairy tale to subvert preconceived notions about the nature of purity, sexuality, violence, and power. The director of this production, Matthew Woods, in a pre-curtain short speech, offered the audience a key to access this elusive world. Woods emphasized the importance of storytelling, both as a persistent theme in Carter’s body of work as well as a theme in the production at hand. It was a tantalizing hint to what we were about to witness.

Rather than beginning Company of Wolves with the cold whistle of wind and wolf howls, the show opens with a country dance: the players lined up to face each other in pairs and happily linked arms and joined hands, cheerfully prancing and stamping their feet in tandem with a very festive, quaint tune (choreography by Kiki Samko, music composition and sound by Sam Beebe). Although there were only four pairs of dancers and no musicians, the animation evoked the feeling of a larger celebration, of a social celebration. The rich and rustic reds, browns, and greens of the costumes (design by Cotton Talbot-Minkin) harmonized with the dance to exude warmth, vitality, and stability, in striking contrast with the menacing winter night waiting just outside

In Company of Wolves, the line between victim and villain is blurred as Little Red (Erin Butcher), fascinated with the warning tales of wolves, insists on visiting Granny (Lorna Nogueira) on the shortest day of the year, when night looms closest. Granny has regaled her (and us) with tales of hungry wolves, dangerously lean wolves, wolves “hairy on the inside,” that is, wolves that take on the shape of men and men who become wolves, the better to devour their unsuspecting prey with. When a frightened bride (Poornima Kirby) loses her modest husband (William Schuller) on her wedding night, she gapes in horror at the huge paw prints left in the snow: it seems to her “as if the beastly things had been having themselves a dance. A dance!”

This imagined wolfish dance took on new meaning considering the rustic dance that opened the show. To say that it seemed that the wolves had been having a frightful dance of their own, a dance portending fearful appetite and frenzy, is to emphasize that fear of the wolves really is fear of the Other; that which is both foreign and familiar simultaneously, like suddenly detecting disease within an otherwise healthy human body, or lust within one who is neither girl nor woman—yet. The actors masterfully embody this space of in-between-ness and the discomfort that comes with it. Physical movement is the marvel and crowning glory of Hairy Tales. Such physicality allowed for no wasted movements. The performers galvanized the radio play scripts: the words, the sound effects, the images that could only form diaphanously in our minds. Acting out the transformations from man to wolf, or serving as various set pieces like fire or furniture (I was a big fan of the evocation of a grandfather clock), or vaulting over props or actors alike, the show’s rich choreography was smooth without being dull, energetic without being spastic, joyful discovery, again and again.

Watching the audience watch the performance, watching in stillness while the actors moved, undulated, pulsated on stage, I felt the experience become surreal. The physical figures in front of me became figments of the imaginations of all those who sat in silence. The audience became the figures sitting around the fire, listening carefully, hanging on to every word the storyteller used to weave ominous yarns, finding the story in this flurry of voice, howling wind, and licking flames…

Intermission witnessed a slight scene change from Company of Wolves to Vampirella, and I would suggest attendees take good care to rest during the intermission. The biggest, indeed, the only drawback I can identify in this teeming production is the structural pairing of both the wintry dream of Company of Wolves and the Gothic smorgasbord that is Vampirella. Unfortunately, despite the incredible visual incarnation of Vampirella, in spite of the impressive energy of the performers, as well as their command of a sluice of European accents including Scottish and Hungarian, in spite of the physical feats and imaginative staging geared towards bringing this wonderfully weird radio play to life, it all proved too much. I felt saturated as Vampirella unfolded before me, and this sense of saturation may have been caused by the giddy cocktail of everything the audience was taking in, rather than due to any one element of the second half of the show.

Vampirella tells the tale of a powerful female vampire (doubled by Poornima Kirby and Amy Meyer), the last countess descending from the ancient line of Vlad the Impaler, condemned to feed off of young virginal men foolish enough to approach her village. Her keeper, a delightfully Scottish and sinister Mrs. Beane (Kamelia Aly) lures potential victims to the Gothic, dilapidated, ancient house. Mrs. Beane was hired by the countess’ father (Schuller), a literally towering figure of a count eking out a post-posthumous existence through his daughter. But the story is not constrained to the Countess; it extends into other tales of gore, of animalizing want, of cannibalism and necrophilia, of power imbalances that make the skin crawl and the imagination catch flame.

It is a marathonesque second half of a show, but not without its high points. I was able to check my increasing weariness in light of the unflagging endeavors of the actors. The grizzly life story recounted by Sawney Beane (Joey Pelletier) and the delightful antics of the proper and jocund English Hero (Michael Underhill) particularly stand out, and served as examples of the effectiveness of using only a handful of stage effects. The lighting behind the backdrop sheet, the eerie soundtrack coloring the gruesome creepiness of a tale or the darkness of a forest, and the unbridled energy of a single player impressed me and overwhelmed me in a much more positive sense then when most of the players crowded on stage. This persistent presence of all the characters onstage may have made Company of Wolves spring to life, but it had the effect of adding an extra layer of stagnation and exhaustion to the already crumbling “House of Love.”

The layering of Vampirella also took its toll, as two or three or more lens of weirdness may have led to imaginative overload: the uncanny tale, the inherent strangeness of the radio play medium, the unearthly manner in which it was being staged before us may just have tipped things over too far, may have tried an attention span just a tad too much. The show is judiciously cut; however, although the show clocks in at a more-than-decent two hours and change, it may have just proved too much for one evening. As Vampirella proceeded, for the first time in the production, the seams started to show: a few lines were flubbed, a couple of props run into or knocked over. For an opening night performance, the miniscule amount of such moments in the face of the sheer complexity of the production normally wouldn’t even warrant my mentioning it. I do mention it because of how it increased my admiration for all the players; I have a nagging feeling that I was only able to peek at these seams due to the Herculean nature of staging both radio plays to such lush extents, all in one evening.

Shifting narrative voices, subtle lighting changes and sound effects, projected images onto an aged sheet backdrop, ribbons of blood pouring down that backdrop, stilts, a functional metal hoop, and one very nifty table…imaginary beasts describe themselves as “an incubator for adventurous theatre making.” To attend Hairy Tales is to witness firsthand the strange and twisted birth of something potent and palpably innovative, something which I have no doubt imaginary beasts will continue to stoke to an even greater roaring pitch in their upcoming projects. I only hope the audience can take every single thing they dish out.