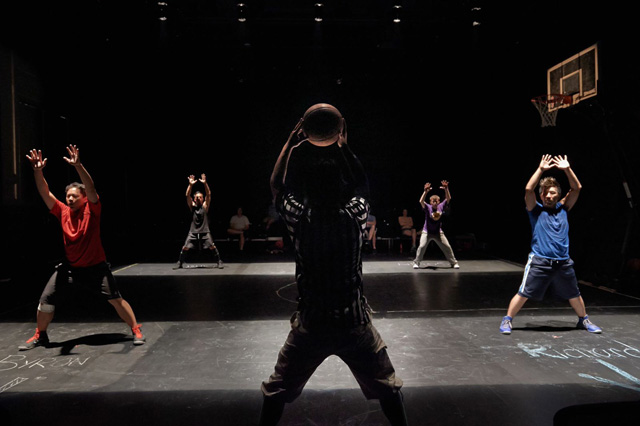 In 1926, Bertolt Brecht, the innovative German theatre director (and playwright, and theorist), spoke about the future of theatre, saying simply, “we pin our hopes to the sporting public.” Imaging traditional theatre as a sinking ship, he dreamed of a world where people get as excited about theatre as they do about, say, a basketball game: cheering for their favourite characters, rising to their feet, and smoking and chatting with friends. In other words, Brecht hoped to make theatre a little more enjoyable and accessible. Never, in all my Brecht-quoting years, have a seen a play that better exemplifies this than Monday Nights playing at the Theatre Center. Suffice to say, Monday Night is the most fun I’ve ever had in a theatre.

Described as an immersive, interactive basketball performance, Monday Nights, by 6th Man Collective, tells the story of five guys who would meet every Monday night, and play basketball at Queen Quay and Bathurst. Now, through this combination of audio, sport, and personal narrative, we navigate their hopes for the future. And we play basketball.

The show begins by choosing a team— black, green, purple and blue— each with a team leader. Each team is placed that the four corners of the room around the mainspace of the stage which is a basketball court. You then sit, put on headphones, and listen to the other teammates describe the team leader you’ve chosen (I was on Team Black, with Darrel Gamotin). With each team listening to something different, we got to know our team leader, and grew to identify with him, while watching all the team leaders play basketball. We were introduced to their basketball skills and weaknesses: layups, dribbling, and shooting came together like a strange dance. We watched and learned different basketball moves, as we learned about the life and dreams of our team leader.

Once this engaging, though at times didactic, audio experience was over, that’s when the real fun began. We took off our headphones, got team nicknames, and learned how to shoot a basketball. The team leaders then lead us through a number of drills, taking volunteers from each team, and we went toe-to-toe with other teams. Between each drills, the team leaders presented us with scattered bits of narrative. Each team leader going in turn, they revealed to each other their dreams, and hopes for self-betterment through a small scenes between the actors/team leaders. While certainly adding depth to the play, these moments of ‘true’ theatre stood in high contrast with the direct contact and conversation that we had with the team leaders. They were moments, albeit well performed and thematically relevant, that brought an eye-roll out of this cynical spectator. Can’t we just get back to the basketball? However, while I may have yearned for more subtly in the narrative moments, (something needed in any approach to a topic as whimsical as ‘hope and dreams’) these moment were much overshadowed by the incredible fun of the performance. As we cheered for our teammates and got points for our team, we were brought, more than once, to our feet, cheering, chanting, and clapping loud. We left the theatre, throats and cheeks sore, totally elated.

The main reason Brecht thinks theatre should be more like sport is because “a theatre that makes no contact with its public is a nonsense”. Monday Nights is a wonderful combination of earnest self-reflection, bromantic community, and sport. It asks the audience to engage in the show—to be part of that community. It asks us to tweet, take pictures, and play ball. But it also asks us to dream, and dream big. The show ends with each team leader shooting at the hoop, repeating their wish/hope for self-betterment like mantras, until they make the basket. The night I saw the show, we watched as Colin Doyle, the team leader of the Purple Team, repeat his desire “to let go”, as he shot at the hoop. This beautiful final moment drew, as the entire show did, on the connection between life and basketball. Each takes hard work, practice, and skill. Each involves celebration, victories, and defeats. Accessible, relatable, and quite simply a lot of fun, Monday Nights is an important reminder of what theatre can do if you’re willing to get on your runners, and play.