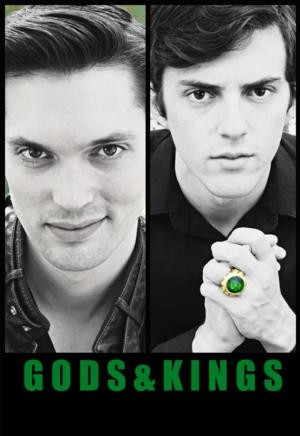 I see so many productions being developed, yet I rarely see a production in development that actually strikes me as one with potential for advancement in New York City. Therefore, I get very excited upon seeing a new musical with a promising premise and a solid musical foundation. That said, the new rock musical Gods & Kings, based upon the play The Bacchae by Euripides, is a welcome discovery. If Jesus Christ Superstar and Hair had a beautiful Grecian love child who played instruments on stage, like in Once, the result would be Gods & Kings.* Gods & Kings is a distinctive piece of art that, with some tweaking, could find a broader audience.

In case you are one of the many people who do not know the particulars of The Bacchae by Euripides, allow me to summarize. The Bacchae is the story of Dionysus, the God of, well, debauchery in general and his efforts to get revenge upon his human extended family who shunned his mother Semele when she claimed that Zeus impregnated her.** Dionysus’ cousin, King Pentheus of Thebes, believes in rational thought, logic, order, and civilized interaction. As stated in Gods & Kings, he is the guy who runs like clockwork. Dionysus is more of a gut-instinct, go with the flow type of god. Dionysus quickly leads followers away from the city of Thebes to enjoy drunken and crazed orgies out in the forest, and King Pentheus feels that his city has been threatened by Dionysus’ actions. Meanwhile, Dionysus’ followers lure the king’s mother, Agave, away from the city and into the forest to join their wild party. Following orders from a revenge-filled and spiteful Dionysus, the same followers begin to amass outside Thebes in preparation to attack the city. Dionysus lures King Pentheus away from the city to observe the danger threatening his city, and, because this is a Greek tragedy, really bad things happen.

Dionysus is essentially the poster boy for sex, drugs, and rock and roll, so it should come as no surprise that the music for Gods & Kings would resemble that of a rock musical. Actors double as musicians on stage with multiple percussionists, guitar players, bassists, banjo players, cellists, mandolin players, and even a violinist comprising the ensemble. As a whole, Neil Douglas Reilly’s music and Austin Ruffer’s lyrics are strong and well-integrated into the plot. Yes, occasionally the lyrics embrace alliteration with a bit too much gusto (he “ponders while pacing the parquet”), and, yes, there are a few musical lowlights that could use some work (the song “Gods Like This Kind of Thing” is well-constructed but too long, and much of the first half of Pentheus’ song “It’s Not In Me At All” has a confused, muddied sound). However, songs like the beautiful “Clockwork” and “The Palace of Thebes” and the powerful “Between Gods & Kings” and “Choose To Be Free” were running through my head after the show, which is no small feat. At times the music can border on “Green Day” pop rock, which may or may not be good depending on your feelings about team Billie Joe Armstrong.

Director Katherine Carter garnered much respect from me for her creative staging choices with this production. The Sheen Center is a blackbox theatre with staircases and high platforms running along the sides of the performance space. Carter not only took creative advantage of the multi-level space, making an otherwise small performance space feel like a large city where an epic battle between gods and kings would be waged, but small touches like having the army of Thebes substitute guitars for swords were welcome directing choices.

Carter, along with casting director Chelsea Ignagni, also brought their A-game when it came to casting this show. Dionysus is described as an effeminate man who sometimes appears beast-like. It is not an easy role to cast. For this reason, I can say with unqualified certainty that Jonathan Grunert is a phenomenal discovery. Part Robin Goodfellow, part Dr. Frank N. Furter, Grunert is eye-catching and brings a David Bowie-like quality to the role of Dionysus, with a powerful voice to match. His Dionysus is a pompous, self-assured, sensual, self-aware man.*** I am fully prepared to see Grunert on other NYC stages soon (please and thank you). Grunert gets some serious aid on stage by his fellow actors who comprise the versatile and talented ensemble of Gods & Kings. Musicians and vocalists Paige Berovitz, Emily Iaquinta (who absolutely rocks a fantastic hairdo in this show), Heath Saunders, Kim Vogels, Billy Joe Kiessling, Jessica Zambrotta, Sam Weber, Kyle Axman, and Wes Zurick all have moments on stage when they skillfully steal the spotlight, only to once again retreat flawlessly into the whole of the ensemble, all of whom collaborate well together.

While many of the cast members give vibrant and respectably crafted performances, some of the actors did not quite find their stride on stage. Ben Garrett is remarkably understated in the role of King Pentheus, and, while he has a respectable voice, he lacked the sort of power and authority that one would expect from a king. Unfortunately for BJ Gruber, the role of the king’s main guard and protector, Acoetes, is woefully underwritten and the character appears to be on stage solely to act as, for lack of a better descriptor, eye candy. Due to these constraints, Gruber’s performance comes across as stilted. One member of the ensemble, Anissa Felix, had me puzzled. At moments, I was absolutely drawn in by her powerful dance abilities and lovely voice, and the next I was cringing because of her overdramatic facial gestures.

One thing is certain – all of the actors look amazing. Caitlin Cisek’s and Matthew Malone’s innovative and expressive costume design incorporates earth tones and simple materials that capture the setting and time period of the play while adding vibrancy with furs, patterns, and cuts that scream rock lifestyle. I adore their design vision for the show.

As a development piece, Gods & Kings has a remarkably strong foundation, integrating a classic and interesting Greek tale about the human condition with an energetic and powerful rock soundtrack worthy of this tragic play. While the book needs to be fleshed out to make the story more understandable and some of the musical numbers would benefit from some editing, one does not have to be omnipotent to see that Gods & Kings has potential to continue its run in NYC.

*Don’t understand my references? Mix rock music with a hippy-filled ensemble that plays a variety of instruments on stage during the show. Same thing.

***Damn. I take back my “alliteration” critique from earlier.