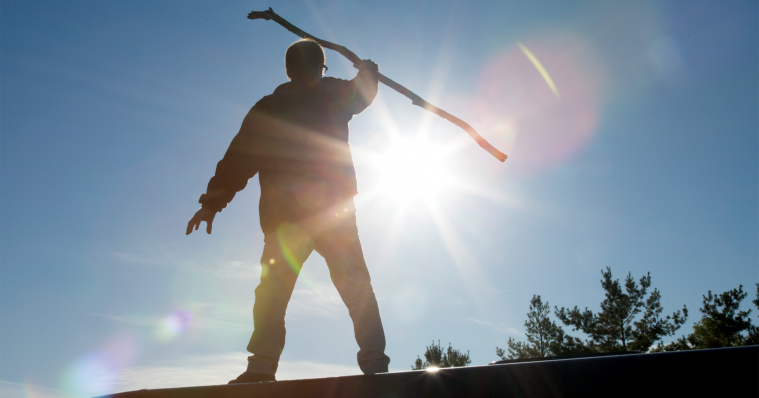 The Tempest is one of Shakespeare’s most difficult plays to stage. The action is fairly simple and the characters generally pretty accessible but there’s magic, a monster, a spirit, multiple apparitions and a big on-stage storm. A big budget, a brilliant directorial brain or, ideally, both is required to pull it off without things looking ramshackle and a little silly. Unfortunately, Driftwood Theatre’s current Bard’s Bus Tour production falls a little short of that difficult task.

The acting is fair, especially the lovely Miriam Fernandes and Kaleb Alexander as young lovers Miranda and Ferdinand, and I liked the gender-bent re-imagined relationship between Farah Merani’s sly Sebastian and Christopher Darroch’s enticing Antonio. The non-human cast members, however, seriously mar the production. Tiny puppet Ariel is alright though Madeleine Donohue is severely limited by the device when attempting to voice Ariel’s bittersweet emotional arc. But it’s Caliban that really makes no sense. Starting out as a large 2-man puppet and growing smaller throughout the show to end up a mere finger puppet, Caliban- one of The Tempest’s most complex and intriguing characters- is no more than a gimmick in this production. The decision to have him voiced by the actor playing Stephano makes it even worse as Peter van Gestel spends much of the play talking to himself, attempting (and often failing) to differentiate which character is speaking at any given moment. In all fairness, that same issue afflicts even the cast members playing just one role since the bizarre use of microphones filters everything through speakers and makes all the voices seem disembodied. Unlike most local touring companies, Driftwood actually travels with a stage (plus some serious lights and sound for a company that purports to believe that “bells and whistles are not what theatre is about”) which is set up for theatre-in-the-round, meaning that even a fairly large audience will sit only 2 or 3 rows deep on all sides of the stage. A setup that intimate is a wonderful tool, so why create distance with completely unnecessary mics?

Driftwood’s Tempest is simply over-complicated. There are a lot of traps in the text and I think director D. Jeremy Smith likely just got too caught up in building bridges over them and lost sight of what’s really important like clarity and character. This was my first Driftwood experience but I’d be very interested to see what they do with a simpler play, something like As You Like It or Taming that only has human characters and no weather phenomena.