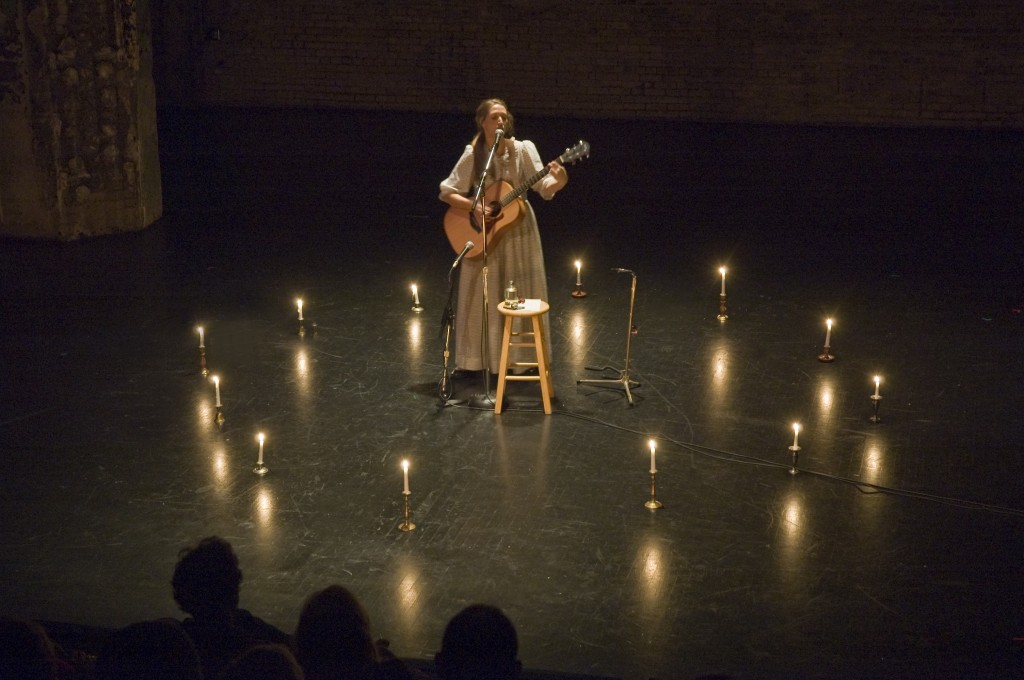 The Legend of White Woman Creek

The Legend of White Woman Creek (B+)
This show should cut its framing device. At the heart of Katie Hartman & Nick Ryan’s no-frills musical drama is a stirring story about love and hate in the burgeoning American west. Alone on stage with just her guitar and her atmospheric and strong (though sometimes a little shouty) voice, Hartman and her well-constructed, dynamic original songs don’t need any of the séance silliness that surrounds them (it makes the piece seem hokey when it isn’t). I don’t need a fake anthropologist to summon the ghost of Anna and tell me why I should care about her; her story alone is enough.

Ancient History (B-)
This is the story of two wildly obnoxious people being wildly obnoxious together, then apart, with some complication in between. It’s essentially a breakup story between a couple who are supposedly perfect together (or so they keep telling us). Cultural, religious, political, social and general attitude differences aside, sure, I guess they are perfect together, if only because they’re too obnoxious to be with anyone else. There’s a rewinding device that is used early in the piece then not again until the very end and a very strange mix of naturalism (look at the relatable devastation of breakups, guys!) with hyper-stylization (they’re always calling each other strange nicknames and doing bizarre over-the-top arm movements). Neither actor gives a particularly likeable performance, which, in a strange Wuthering Heights-y way, makes their loss of each other more devastating. But it also makes Ancient History very hard to invest in.

Einstein! (D)
Albert Einstein is one of those figures (perhaps the most prominent) whose accomplishments have become so well known that his name has taken on meaning far beyond his identity as a human being. He’s a symbol, a slang term, a piece of pop culture as much as of scientific history. As a bi-product of this level of infamy, we seem to know very little about Einstein’s actual life. That juxtaposition makes Einstein a wonderful subject for a solo Fringe show. Unfortunately, the subject is not done justice here. Jack Fry’s performance is inconsistent and frenzied, delivering much of his too-long script as unintelligible mutterings. The story is fragmented and none of the other characters come through clearly at all. Apparently this play was created to convey some recently discovered details of Einstein’s life. I’m still curious to know what those are.

It’s Kind of a Love Story (B)
First thing’s first, let’s clear something up: this is definitely a love story. This “kind of” business is how you get yourself into a mess like Alison’s. Essentially her problem is thus: She loves Michael, Michael loves her, but she’s a nincompoop; that’s all (and there’s a psychopathic therapist who no one should ever listen to ever). On the grand scale of largely unsympathetic problems to have, this one at least touches on real contemporary fears. Although, if you’re mutually in love with your kind, funny and dreamy best friend, life should really not be this difficult. This is a plot wholly driven by cowardice and that’s frustrating. Despite its abrupt ending and the strangely intense themes introduced in the final act then discarded too easily, Naomi Peltz’s rom-com-y script is better than it seems here. The characters are really engaging but the actors don’t quite nail the dialogue rhythms (hindering the comedy and chemistry I otherwise think Peltz builds fairly well) and Erin Burgess’ Alison doesn’t have the comfortable physicality that she needs with Chris Isaak’s Michael to sell the longevity and intimacy of their relationship. Director Vicktoria Adam adds intriguing details like Michael’s silent, interrupted advances during Alison’s therapy scenes but the production needs more natural chemistry to succeed. I found It’s Kind of a Love Story more engaging than the production really merited; if only I could allow myself to love it (see what I did there?)!

Little Miss Understood (B-)
The hook of this mother-daughter play is that it’s written and played by actual mother/daughter duo Stephanie Fowler and Beatrice Fowler-Campbell. What’s intresting about this fact is that the simple act of writing and performing a play about their feelings has likely brought Stephanie and Beatrice past the barriers that plague them in Little Miss Understood. Watching the uber-relatable battle of teenager vs. parent, it’s hard not to want to yell “Just tell her how you feel!”. Predictably, Stephanie’s motherly woes form the thread that comes through most clearly (as an adult she’s, theoretically, in a stronger position to express herself) but Beatrice is able to find a few unexpected moments of real communication with the audience. The play itself isn’t all that remarkable but there’s something truly compelling about being privy to the coping mechanism that is helping this particular mother and daughter get through the hell years.

Fantastic Extravagance (B)
This is a very solid piece of theatrical output. Lara Stokes’ script places a moderately interesting though far from original heroine in the very sympathetic position of feeling perpetually misunderstood. Eden’s crippling fear of failure, desperate loneliness and search for artistic fulfillment make her a worthy protagonist (aided by Lindsey Clark’s amusing and at times poignant performance) though we have definitely seen the likes of her before. In fact, the whole play feels a bit like a Stranger than Fiction adaptation only without Emma Thompson, Dustin Hoffman or the awesome GUI. Though it’s not inventive, it is well executed and entertaining. The two-dimensional characters who orbit Eden are all fantastically drawn, if two dimensional. My favourites were her terrifically horrible and pretentious parents and Jon Blair as the well-meaning but pushy publisher who inadvertently tortures Edna. The contrasting critical interpretations of the book-within-the-play “Fantastic Extravagance” are also particularly amusing while raising fascinating themes of the importance (or lack there of) of subjective interpretation. There is little particularly special about this piece (especially for a story ostensibly about a special artist) but it is still a far more competent and consistently enjoyable piece of theatre than most found at the Fringe.

The Dark Fantastic (B-)
Martin Dockery is a really unique Fringe artist. After the thrill ride that was his 2011 show Bursting Into Flames, there was no way I was missing The Dark Fantastic. While this newest offering doesn’t quite have the energy of its predecessor, Dockery’s engulfing storytelling style and fantastically inventive storytelling mind still make his storytelling captivating (Storytelling! I stress the word because that’s all Dockery does. All he needs to do. Because he’s the best at it). The Dark Fantastic is fairly weird and you may find your mind wandering but it’s imperative that you force it back to focus because the complexity of Dockery’s construction makes every word unmissable.