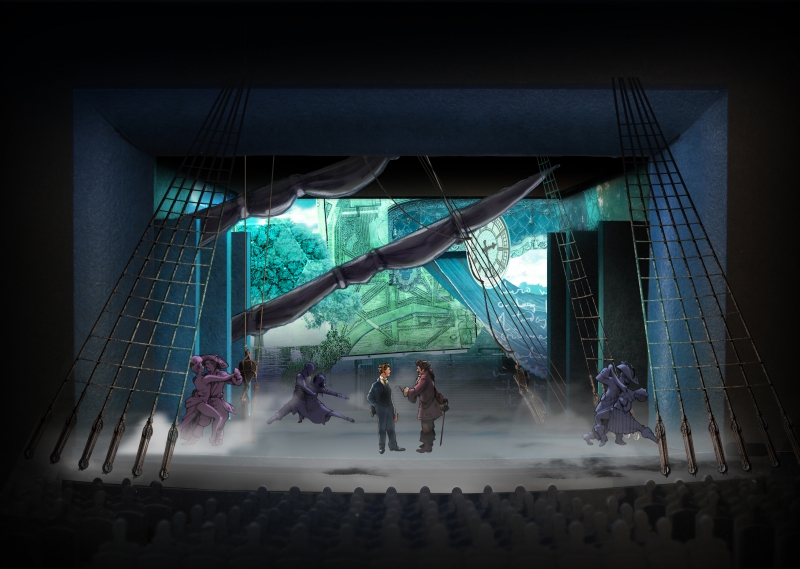 Many patrons lament that Boston lacks theatre in the summer months; earlier this season, we would have agreed. But as we constructed our July Must See, we found a plethora of new works, ambitious projects, and familiar favorites for the whole family to enjoy during the warm summer evenings. As always, we offer variety: straight plays, Shakespeare, musicals, and immersive artistic experiences. We also hope to promote new and ambitious works in Boston, a city that often lacks the financial and cultural support to be a creative center. While thematically these productions are all over the proverbial map, at their core all the plays offer impressive journeys regarding creation; whether it’s creating a new family, a new self, a new world, or a new work. As Boston grapples with how to generate a more vibrant theatre and arts scene, perhaps the productions on this July Must See list provide a much-needed lens into considering the art of creation and the power of imagination.

What are your top Boston theatre picks for July? Will you opt for the suspenseful AN INSPECTOR CALLS? The lush and hilarious TWELFTH NIGHT? The new and engaging CREATIVE LICENSE? The exciting FINDING NEVERLAND? Or the immersive ASTRO BOY AND THE GOD OF COMICS? Or, more importantly, is there a production which did not make our list which should have? What other Greater Boston theatre production sparks your imagination? Feel free to comment below, or email us.

AN INSPECTOR CALLS
Written by J.B. Priestley
Directed by Catherine Spino
Boston Teen Acting Troupe
Boston Center for the Arts
Plaza Black Box Theatre
571 Tremont St., Boston, MA 02116
About the Production
July 16 – 19, 2014
The Boston Teen Acting Troupe (the “BTAT”) impressed with its THE DREAM OF THE BURNING BOY in the Spring 2014 with excellent acting, strong script selection, and good directing. The troupe is a growing force for young actors to create art outside of the confines of “bad high school theatre.” AN INSPECTOR CALLS is directed by Drew University senior theatre arts major (and the BTAT Co-Artistic Director) Catherine Spino, and boasts some emerging teen talent. The BTAT Co-Artistic Director Jack Serio (Director of THE DREAM OF THE BURNING BOY) returns to his roots as an actor before starting as a freshman at NYU’s Tisch Program in the fall. Many of THE DREAM OF THE BURNING BOY cast returns, including favorites Barbara Woodall, (the underused) Garrett Sager, and Sam Vita. AN INSPECTOR CALLS explores the hypocrisy of Edwardian society, as an inspector uncovers the truth behind an alleged suicide and the many secrets hidden among those high in the social pecking order. While the choice seems odd for a teen acting troupe, the consistently strong work by the BTAT and the impressive cast and crew promises a delightful glimpse into the success of young adults creating meaningful art within the Greater Boston community.

TWELFTH NIGHT
Written by William Shakespeare
Directed by Steven Maler
Commonwealth Shakespeare Company
Parkman Bandstand, Boston Common
About the Production
July 23 – Aug. 10, 2014
Summer is for Shakespeare, and few theatre companies do it as well as the Commonwealth Shakespeare Company. Boasting an impressive nineteen seasons, the Commonwealth Shakespeare Company returns with an audience favorite, TWELFTH NIGHT. Set in mystical Illyria, the shipwrecked Viola must disguise herself as a young page and employ herself to the love-struck Duke Orsino, with whom she engages in a messy love triangle along with the Countess Olivia. Added to the mayhem is the delightful Sir Toby Belch and company (Feste, Maria, and Sir Andrew Aguecheek), a merry crew responsible for some of the most humorous scenes in all of Shakespeare, as they antagonize the foppish and pompous Malvolio. In addition to being one of Shakespeare’s accessible comedies and a delight for all ages, the play is also FREE and performed outdoors on the beautiful Boston Commons for all to enjoy. With performances throughout the end of July and early August, there is no excuse to miss this delightful Shakespearean summer romp! Reserve your chairs and picnic boxes in advance!

CREATIVE LICENSE, A NEW MUSICAL (WORLD PREMIERE)
Book and Lyrics by Kevin Cirone, Music by Kevin Cirone and Spencer Elliott, Additional Music by Dan Rodriguez
Directed by Kevin Cirone
Music Directed by Dan Rodriguez
Choreographed by Rachel Bertone
Davis Square Theatre
255 Elm Street, Somerville, MA
About the Production
July 24 – Aug. 2, 2014
Details are slim on this new work, but it needed to be included in the Boston My Theatre July Must See List. Boston rarely gets new musical premieres, and CREATIVE LICENSE promises to change this trend. The plot follows Casey, a down-on-his-luck writer who may have hit the next big thing; however, the new work depends on collaborating with his former friend (lover?) Bethany on a nutty professor’s “magnum opus.” Hilarity with a rocking musical score follows, as CREATIVE LICENSE explores “art, family, friendship, and double-malt scotch.” Hopefully, they serve the double-malt scotch to the audience too. The cast and crew makes this a “Must See,” featuring 2013 Boston My Theatre Best Choreography Nominee Rachel Bertone (LES MISÉRABLES), 2013 Boston My Theatre Best Supporting Actor in a Musical Nominee Ross Brown (LES MISÉRABLES), Michael Levesque (ROOMS: A ROCK ROMANCE, NEXT TO NORMAL, and JACK THE RIPPER), and more. While Kevin Cirone has been a Boston musical theatre staple, he has the potential to make much-needed changes to the Boston musical theatre fringe scene as a director and writer. Will CREATIVE LICENSE be the inventive solution? Find out, and let us know!

FINDING NEVERLAND (A WORLD PREMIERE MUSICAL)
Music and Lyrics by Gary Barlow and Eliot Kennedy, Book by James Graham
Directed by Diane Paulus
Choreographed by Mia Michaels
American Repertory Theater
Loeb Drama Center
64 Brattle St., Cambridge, MA
About the Production
July 23 – Sept. 28, 2014
How could FINDING NEVERLAND at the American Repertory Theater (the “A.R.T.”) not make our July Must See List? This long-awaited musical adaptation of the Miramax motion picture by David Magee follows the real-life relationship between playwright (and writer) J. M. Barrie and the Davies family that inspired Barrie’s hit PETER PAN, OR THE BOY WHO WOULDN’T GROW UP. This musical fairy tale is a story for families of all ages, but it is not simply a whimsical tale of fighting pirates and lounging in Mermaid Lagoon. Instead, the musical explores the power of imagination clashing with the inevitability of growing up, and all the loss and grief that accompanies this pressure-filled transition. Rent the movie if you want to know the story, see the musical if you want to experience art. The A.R.T. Artistic Director Diane Paulus is a master of spectacle and thrills, enchanting audiences with her clever melding of story with high production quality.

But, perhaps more importantly, the A.R.T. features a world premiere cast of high-quality stars begging for a Broadway transfer for Spring 2015. Jeremy Jordan leads the cast as J. M. Barrie; his youthful energy and impressive vocal range have earned him a cult following, but he needs a solid production to cement his place as a rising star. Laura Michelle Kelly seems like a surprising choice for Sylvia Llewelyn Davies, but she’s expected to impress. Carolee Carmello is a delightful choice for Madame du Maurier, and perhaps the most deserving (and anxious?) for a Broadway transfer (and Tony nominations/wins).

See a clip from one of the songs from FINDING NEVERLAND (performed by Jennifer Hudson, who makes no appearance in this production): https://www.youtube.com/watch?v=UzLQmZETrZ4 (from the Sixty-Eight Tony Awards).

My only critique (and it’s nothing new) is the lack of Boston actors who are featured in the production, or in most productions at the A.R.T. With a commitment to creating Broadway-quality works in Cambridge, can’t the A.R.T. also commit to nourishing Boston actors in such works?

ASTRO BOY AND THE GOD OF COMICS (NEW ENGLAND PREMIERE)
Conceived and Directed by Natsu Onoda Power
Company One
Boston Center for the Arts, Plaza Theatre
539 Tremont St., Boston, MA
About the Production
July 18 – Aug. 16, 2014
Celebrating its fifteenth season, Company One’s success comes from its internal motto to stage shows that “feel impossible for a company of [their] size to do.” In short, they continue to rise to the challenge. With their critically-acclaimed (and Pulitzer Prize-winning play) The Flick by Annie Baker in Spring 2014, Company One solidified their growing repertoire of artistic skills and integrity. ASTRO BOY AND THE GOD OF COMICS is a Japanese play by Natsu Onoda Power, chronicling the famed illustrator Osamu Tezuka’s journey to create the beloved anime hero Astro Boy. The play was performed in Washington, D.C., where it was praised as “one of the top three best theater experiences in 2012” by THE WASHINGTON POST. The play features projections, film, puppetry, and live drawing to create the wide-eyed, lifelike robot with a perpetual smile. The play is not all cheer; it offers a complex and insightful view on how we deal with death, trauma, and chaos, especially in a historical context. While this might seem like an ambitious undertaking for a theatre company, it’s part of the standard artistic flair for Company One. See them draw success later this month.