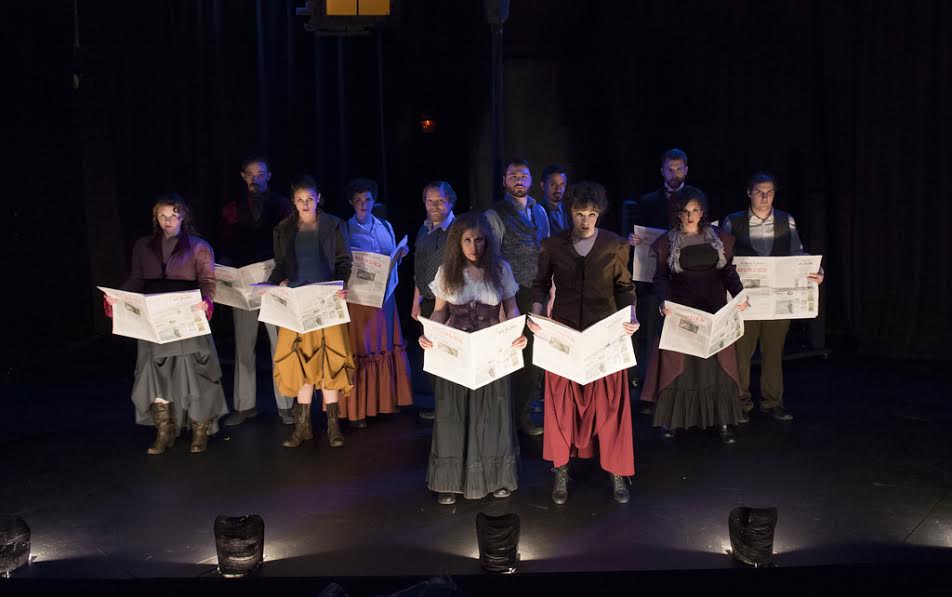 Jack is Back, But Ripped Apart

Jack the Ripper is not a new tale; tracing back to the 19th century, Jack the Ripper has haunted and plagued the media and bedtime stories as an unsolved “murder of the century.” In fact, Jack the Ripper (can he ever be “Just Jack”?) was selected by the BBC History magazine as the worst Briton in history. That’s quite a feat. Why is he the worst? Because he killed no less than eleven women? Because he sexually assaulted his victims? No, but because he is a fear which is spoken but rarely named and never caught. Jack the Ripper represents the unknown, but, more than that, he holds a special place in history because of the many sociopolitical effects of his “Whitecapel murders.” So why the exposition? The F.U.D.G.E Theatre Company premieres Jack the Ripper: The Whitechapel Musical at the Boston Playwrights’ Theatre, book and lyrics by Christopher-Michael DiGrazia and Steven Bergman, and music by Steven Bergman. While the musical dates back to the 1990s, this musical has been revised such that it feels like a new piece. The musical, however, falls into bad habits and, like Jack the Ripper, commits some disturbing murders of otherwise talented performers.

DiGrazia and Bergman’s musical depicts their own interpretation and answers to this famous unsolved mystery. Centering around the historical events of late 1888, the musical offers some historical accuracy, but quickly creates its own subplots and twists to add to the excitement. Here, five of the victims are friends and confidantes as Whitecapel is ripped apart by the news of these sudden killings with the same modus operandi. DiGrazia and Bergman focus, in part, on the extensive influence of the media, specifically journalists who stop at nothing to learn and divulge “the truth” about these murders, their victims, and the now infamous killer. The three “Gentleman of the Press” are convincingly played for their manic and desperate qualities by Eric Rehm, Jermaine Golden, and Cristhian Mancinas-Garcia. The three sing in beautiful harmony (one such musical highlight in this show), but their acting resorts to mere caricature and seldom reach the level of individualized journeys. Instead of exploring how journalism was adapting (or not adapting) by using three distinct journalists with their own motives and pursuits for catching the Ripper, the musical uses them as a mere Greek Chorus, embodiment of an entity rather than real characters or people. Unfortunately, these three are also given one of the most annoying songs to pull it all together: “Story of the Century.” The song feels like it drags the audience throughout the musical, popping up just when you thought that you couldn’t be blindsided by the theme of unsolved mayhem and murder (Note: the song is damn catchy which is strong praise for DiGrazia and Bergman’s writing).

Unlike other historical accounts of the murders, Jack the Ripper: The Whitechapel Musical attempts to pinpoint one suspect, the alleged killer who is not so coincidentally named Jack (played with gusto by Matt Phillipps). His bloody rampage is tied inextricably with God and sex (didn’t expect that, did ya?), and he targets five local prostitutes and friends. The kicker? One of these ladies knows Jack and harbors a deep, dark secret (relieved with weird sincerity in Act II), which prevents her from sharing with the others all that she knows about the killer. The women deliver mostly strong performances with some of the best coming from Hollyann Marshall for her emotional performance as Mary Jane Kelly; Lori L’Italien with a surprisingly comedic relief (and not enough singing!)  as Catherine Eddowes, and Katie Presig’s strong and steadfast turn as Elizabeth Stride. Together, these women provide a strong backbone for the musical, though even they can’t hold it up. The female-powered musical numbers are strong, yet the musical suffers from a lack of dialogue and, even when it provides some dialogue, it feels like filler to propel the characters into the next musical number instead of furthering any hope of a plot. My biggest issue is identifying whose story the musical is trying to tell. Is it Jack’s? Probably not because while the composers go out of the way to make the audience feel empathetic, he offers very little “change” or growth over the course of the musical. Is it Mary’s? Possibly, though she too provides a little too little, a lot too late for her climax. Is it the story of ambitious and empathetic Inspector Frederick Abberline (played with an odd accent but otherwise good appeal by Michael Levesque—he’s done better work and I assume the fault is in the bland material, but, gosh, he seemed bored to track down a killer)? Also, probably not, his material is too weak and he seems more focused on finding a killer rather than finding anything about himself. So whose story is being told? And why do we care? In other words, why is this musical important or relevant now? What do we learn about Jack the Ripper, his world, and, more importantly, ourselves from watching this too-long musical? The musical needs drastic cuts and revisions, and, please, someone write a book that compares to the soaring ballads.

Director Joey DeMita does his consistently good work with this musical, despite the musical’s inconsistencies and many pot-holes. For instance, DeMita is an admirable director for his ability to do something with very little resources; here, as Scenic Designer too, he uses moveable steel fences to create the many cold and dank scenes of London’s most impoverished. His use of windows with a lone candle creates depth to the stage and isolates the women to the outdoors away from society’s comfort. The space is simple and malleable, perfect for the rapid scene changes and visually interesting to watch. DeMita also doubles as Costume Designer, which, vary in their resourcefulness and success based on the character. Some of them looked appropriately drab, especially the women; some of them looked like they borrowed costume pieces from each other’s closets and called it 1888. The lighting design by PJ Strachman is one of the strongest attributes of the production, though even that got dulled by the lengthy performance. Strachman uses subtlety in the intimate Boston Playwrights’ Theatre with undertones of red for many of the scenes, mixed with softer blues, to create depth to the London foggy air rank with blood. A visually appealing show only does so much when the musical is wrought with clichés, overdone characterizations, and repetitive musical elements.

This musical is no Sweeney Todd or Jekyll and Hyde. For once, it doesn’t offer nearly the same emotional complexity or depth in its characters. Phillipps works hard to make his Jack shine with one of his best vocal performances in recent memory, but his acting is belabored by the play’s heavy-handedness and psychological intricacies. Levesque seems bored with the material and his role (and for good reason!). The women offer some solace, but ultimately they are too similar in many of their characterizations, mostly a fault of the lack of dialogue to further their personalities and relationships. Music Director Ben Oehlkers does an admirable job with the dense score, playing piano and conducting the orchestra from above the stage, but, in the intimate Boston Playwrights’ Theatre, the sound is often overwhelming and often falls flat upon the ears. Some of Bergman’s songs should have been refined for the voices, especially Marshall’s Mary who has a stunning lower register which is rarely utilized. Moreover, the musical jeopardizes the “story of the century” by giving the audience all of the answers. Instead of introducing multiple potential suspects, the musical focuses on the psychology of one, taking liberties with history to create a dramatic (and slightly campy) explanation for one of the greatest mysteries and horror stories of our time. Instead of being afraid of Jack, I felt sorry for him, an interesting concept for sure, but nonetheless disappointing and unfulfilling. A more complicated “anti-hero” would make for a finer story and a sharper focus in a musical that offers some promise with a cast that boasts more talent than displayed on that stage. With the chance to change history, F.U.D.G.E. merely ripped it apart at its seams and left it for someone else to clean up.

You can catch F.U.D.G.E.’s next work, the rarely-performed but outstanding musical City of Angels, directed by Joey DeMita and music directed by Steven Bergman, at the Arsenal Center for the Arts in Watertown, playing July 11 – 19, 2014. With DeMita’s success as a smart musical theatre director, City of Angels offers much a theatrical journey to be awaited.