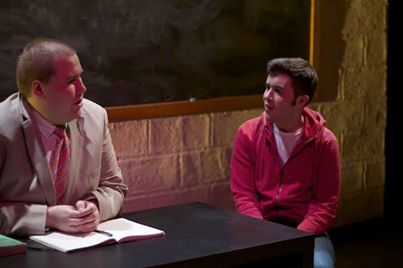 The Boston Teen Acting Troupe is something special for the Greater Boston area. Boasting impressive teenage leadership with a compelling mission to bring “enriching, engaging and edgy theatre to teens” and to provide “an outlet for Boston teenagers who are serious about their craft, whether that is acting, directing or design.” However, the company does more than this. It educates the Greater Boston community that teenagers and the next generation of performers have the talent, the passion, and the dedication to make interesting and creative art, educating their elders on some of the real struggles and issues facing teenagers today. With so many accomplished goals, it’s surprising to see that they don’t have more support from their elder local companies. For shame, Boston theatre community, for shame. While their production of The Dream of the Burning Boy is not perfect, like a teenager, it is the work in progress, the progression, and the earnest energy which keep make it memorable and a production for which you must nurture and appreciate.

The play, written by New York University professor David West Read, tells the story of high school English teacher, Larry (Max Gustafson), after the untimely death of one of his students, Dane (Garrett Sager). Left behind, his girlfriend, Chelsea (Evy Oliverio); his best friend, Kyle (Ronan Smith); and sister, Rachel (Barbara Woodall) must navigate the rocky terrain and uncharted waters of teenagers who must grow up far sooner than they would like. However, Larry must negotiate his own emotions and secrets with the help of guidance counselor and friend, Steve (Sam Vita), and Dane and Rachel’s mother, Andrea (Devan Callahan). The result is a heartbreaking exploration of not realizing each moment and the difficulty in moving on past the grief and regret that comes with an untimely and sudden death.

Director Jack Serio coaches and guides his actors with a steady and talented hand well beyond his fresh-faced youth. In particular, the teenagers zing with the freshness and unabashed emotional unsteadiness of outstanding performances. Woodall claims the highest praise for her natural and compelling portrayal of the disturbed and broken, but stubborn and willful, Rachel. Every moment with her felt real, displaying emotions and restraint with conviction and poise surpassing her adolescent years. Like Rachel, Woodall displays the talent and personality of a young performer who has grown up far faster than expected. Matching her, Oliverio’s Chelsea displays such earnestness and sincerity in her work, though neglects some of the emotional heaviness at times, in favor of smiling through the sadness. Smith’s Kyle is also a welcome (though underutilized) gem; with an easy charm, Smith performs a character that I wanted to know more about and spend more time with onstage. Sager’s Dane sparkles in his brief scenes, creating the poster-boy image that lasts in your head for the rest of the play, perfectly exhibiting why every other character would miss and long for him so much.

While equally talented performers play the adult characters, their performers sparkled with less truthfulness and sincerity, partly because of the actors’ ages and experience levels. Vita plays his Steve with awkwardness and slapstick humor, filled with grins and sheepish bashfulness which detracts from his friendship with Gustafson’s Larry and role as his spiritual and emotional counselor. It seems that neither character Steve nor actor Vita are up to the challenge of performing for Larry and the teenagers. Perhaps the most disappointing is the reserved performance by Gustafson. Clearly the protagonist of this teenage story, the gravity of the situation seems beyond Gustafson at his age. While he attacks the role with vigor, he felt stifled or withdrawn from the play’s action for most of the performance. It’s not a bad performance, but with such honesty from the actors playing teenage roles, the adult roles felt cheap, less informed, and less understood, despite the ample material within the script for dynamic and interesting characters.

Which brings me to the point. While I admire the Boston Teen Acting Troupe for tackling difficult material with plenty of heart and commitment, their strength is understanding the emotional complexity of teenagers. The truthful acting of seeing teenagers playing teenagers resonated. Far too often, we see adults attempting to reclaim their youth by playing adolescent roles. With such talented performers, this company tackles and excels at portraying these same roles with more truth and talent than their older thespians. The issue? Far too few playwrights write compassionately, intelligently, and thoughtfully for adolescent performers. We assume that they have trivial problems with easy solutions. The Boston Teen Acting Troupe proves, once again, that teenagers can tackle adult-like material with plenty of skill and heart. Serio has a bright future ahead of him to be able to coax, teach, and encourage such performances from his cast of peers. I hope that he will continue to grow as he gains more education and experience (for example, I was particularly irked by the wasted moment for teacher Larry to keep the door closed when talking with Rachel, a female student; that is a huge no-no, which I think an older director might pick up because of age and experience).

I look forward to Boston Teen Acting Troupe’s next productions, especially as they bring insightful and challenging work to Boston’s young performers, and I hope that other teenagers will appreciate the opportunity to see their peers tackle such work with the thoughtful and resilient effort of this cast. While the performances are uneven and elementary at times, the heart of the play is not lost on this generation. For that, I see a bright future for many of them, and a glowing review near in their future.

Their next productions include a staged reading of MJ Halberstadt’s Annie Doesn’t Live Here, directed by Jack Serio, performing May 24, 2014, at 7PM, at The Boston Center for the Arts Plaza Theatre. More information can be found here for this FREE performance, though reservations are strongly encouraged. The Troupe finishes their season with Fredrich Durrenmatt’s The Visit, directed by Catherine Spino, on July 16 – 19, 2014, at The Boston Center for the Arts Black Box Theatre.