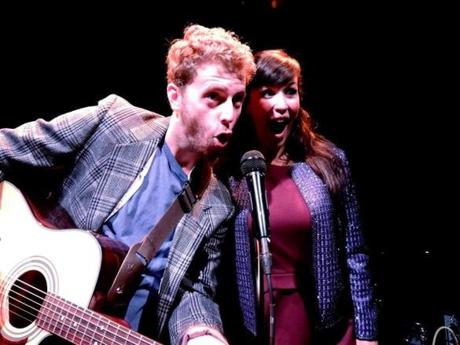 Bad Habit Productions has proven to produce some of My Theatre staff’s favorites (Arcadia and Much Ado . . . With a Twist just to name a few). They are known for their willingness to take chances and succeed. Rooms: A Rock Romance fell a little flat for me, and I am still struggling to discover why I feel that way. Directed by one of my favorite Boston directors and theatre artists, Daniel Morris, Rooms is a two-person journey through the ways and extremes that we are willing to attempt to connect with others. Moreover, it’s an excellent commentary on the things we give up as we pursue our goals. I am unfamiliar with the musical, so perhaps my complaints and hesitations are directed not at this production but at Paul Scott Goodman’s show.

Asheley Korolewski plays the impossible and grating Monica P. (don’t forget it) Miller. Honestly, she’s talented; she is trained and polished, and she can belt her (and my) face off.  But two things: she knows she’s talented (though that might be Korolewski acting as Monica) and she has annoying acting tendencies. Like a musical theatre performer and vocalist who never rarely attempted a Shakespeare or Chekhov, she performs mere caricatures rather than a fully-articulated and realized character. I’ve heard others blame the source material, but I think that’s a cop-out for a two-person show. The fault of a two-dimensional performance in a two-person show lies with the actor, not the writer. However, Korolewski steps into her character at times, showing us that less is more. Her quietest and more subdued moments manage to transcend Ashley and land solidly in a real character. These moments come best when she fits naturally into a relationship and chemistry with Michael Levesque who plays her on-stage romantic (??) interest, Ian Wallace.

Levesque is impressive. I knew he had this kind of performance in him, even after being miscast in Next to Normal a few seasons ago. He manages to make the music and material his own, improvising and embellishing when he sees fit and making the emotion ride naturally from him. Levesque and Korolewski play off-stage couple and their chemistry fits naturally into these characters. While I hope their real relationship isn’t this rocky or tumultuous, they fit perfectly together in their dramatic struggles as Ian and Monica. Unfortunately, neither the beginning nor the ending sell me on their relationship, relying instead on the emotionally rocky middle segments to cement their intensity and characters.

Crystal Lisbon does a superb job with the difficult accents, allowing the actors to explore how the songs and minimal dialogue fit into their voices. While sometimes their accents are more subdued, they never disappear, even during the most difficult musical numbers. Emily McCourt’s lighting is haunting and beautiful, telling the story perfectly with color and transitions. However, the strongest accolades go to music director Antanas Meilus. Meilus manages a difficult score and commands a powerful rock band. The band is one of the best parts, creating a perfect backdrop to this rock musical.

While I can’t say that I enjoyed Rooms: A Rock Romance, I can see the appeal. Maybe others can overlook the campiness in parts, and instead appreciate the underlying story with its strong emotions and journey. I was left slightly disappointed, especially considering the hype about this particular production and its extended run. As usual, Bad Habit Productions serves up a unique season, including Frank McGuinness’s Someone Who’ll Watch Over Me, Daniel Morris’ adaptation of Paint Me a Picture, and the much-anticipated Caryl Churchill’s Top Girls. Don’t miss these gems!