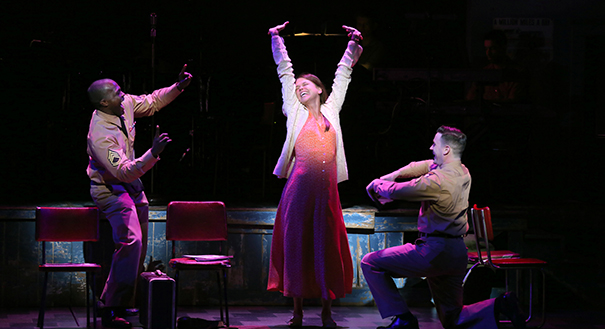 Scars. We’ve all got them and there is usually an interesting story to accompany each and every one. Society’s obsession with beauty has led many a woman to scramble for products and treatment to avoid the appearance of scars. Unfortunately, I am too active to avoid them and proudly bear several small scars on my face, including one from a high-stick thrown by an angry teammate on my all-boy (except me!) hockey team in elementary school. Admittedly, the scars I have are hardly noticeable. Violet, the main character in Roundabout Theatre’s newest musical, is not so lucky. Violet is the tale of one woman’s adventure to have her disfiguring facial scar healed by a rousing preacher in Oklahoma and the people whom she encounters along the way.

Calling it a new musical is deceptive – Violet is actually a revival of a production which originally found success off-Broadway. The greatest tragedy to befall this simple story is moving it to a large theatre where the actors and staging are overwhelmed by a grandiose space. There is nothing overly complicated or novel about Violet. A young and disfigured woman (aptly portrayed by accomplished leading lady Sutton Foster) boards a bus for middle-America under the misguided belief that a television preacher can heal her disfigured face – the result of a childhood accident.  Violet meets and becomes acquainted with two soldiers, Flick (Joshua Henry) and Monty (Colin Donnell), who show her a fun night of boozing and dancing at an overnight rest stop in Memphis. While Violet has a one-night stand with cute guy Monty, it is ultimately Flick with whom she bonds over common experiences with social rejection (Flick is black and the play is set in the south in 1964). When Violet’s hopes for outward healing are spectacularly destroyed,* the real question is to which of the two soldiers will Violet turn for comfort? More importantly, despite her scar, will Violet return with a healed soul that permits her to lead a life without regret and anger over her physical appearance?

Certain aspects of Violet are difficult to accept (e.g. an ostensibly “ugly” girl who has lived her life as an outsider suddenly wins the affections of not one, but two, handsome soldiers), and certain aspects of the plot traverse dangerously close to the precipice of trite. However, Violet is generally a quaint and emotional story. The music is similarly well-constructed but, again, not terribly challenging or singular. Stand-out pieces include the oft-reprised “Water in the Well,” the opening number “On My Way,” and the obligatory soft love song “Lay Down Your Head.”   Surprisingly, the most exceptional song in the show is not sung by Sutton Foster, but rather the delightful Joshua Henry, who belts out the feel-good “Let It Sing” with heart and gusto.  Much like the plot, the music is subtle and acceptable – pleasant is perhaps the best way to describe it. I take no great exception to it but was not particularly enthralled with it either.

Sutton Foster is one of my favorite Broadway actresses – she is just so darn energetic and delightful in a “girl-next-door” sort of way (assuming your neighbors are powerhouse vocalists). Much like her brother, Tony-Award nominated Hunter Foster (most recently seen in Bridges of Madison County),** Sutton is often cast as the “everywoman” – strong and capable, yet not the bombshell diva one might expect from a lead actress. She is an ideal candidate to portray Violet and does a lovely job of highlighting Violet’s anger, vulnerability, and the shield of antagonism and suspicion that comes from years of being ostracized. In addition to Foster, Emerson Steele was well-cast as a young Violet, and she has some beautiful scenes with Foster. As previously mentioned, Joshua Henry truly shines in this production and brings some energy to the show. Unfortunately the same cannot be said for Colin Donnell who comes across less as a charming playboy and more like an inexperienced and confused teenager. Donnell’s performance contributes to the slightly uncomfortable love triangle between Flick, Monty, and Violet, which is never quite believable.

The staging and set in Violet is minimal. A few chairs represent Violet’s bus, and the set is reminiscent of an old diner that one could find at any mid-western gas station, with the orchestra sitting on stage (and overpowering the singers at times, much to my irritation, thereby transforming the actors into muffled mimes).

Then we have that horribly, disfiguring scar. Except there isn’t one. The scar is a figment of the audience’s imagination. No scar means no distracting make-up – Violet’s scar is as bad as one believes it to be. The severity of her disfiguration is implanted in the minds of the audience without having to prove to the audience that she is grossly disfigured. I respect this approach because it circumvents pesky disbelief.*** Strangely enough, the bigger story for many journalists has been the make-up that Foster does wear on stage, which is none. Not that you can tell (and not that I would care even if you could tell). Sutton Foster looks like, well, Sutton Foster. She is beautiful fresh-faced and is not known for wearing particularly bold make-up normally, so, if I had not been told that she was fresh-faced, I would not have known that she was not wearing make-up. ****

At its core, Violet is a poignant tale about body image and insecurity that most people can identify with. This makes Violet a worthwhile, albeit unremarkable, theatrical experience, but, unfortunately, the story and staging likely work better in a more intimate venue.

*Perhaps I should say “SPOILER ALERT” but that would be a bit like saying “SPOILER ALERT – at the end of Titanic the Musical, the ship sinks.”

**Siblings like Sutton and Hunter inspire me to call my twin sister and tell her to pick up the slack – I cannot continue to be the only accomplished one in the family. My twin is in a PhD program at a renowned university doing “science-y” stuff after spending two years in the Peace Corps. Thus far she has won ZERO Tony Awards.  Talk about being the family disappointment.

*** Every time that I have seen Phantom remove his mask in Phantom of the Opera to reveal his repulsive face, I find myself nonplussed by the vague, acne-like discoloration in one small area of his face that I can sort of make out from my seat.

**** Only in New York, Los Angeles, or in the entertainment industry would this be such a BIG DEAL. There are women all over the world who do not wear make-up on a daily basis (yes, even in this country). Get over it. #TheMoreYouKnow.