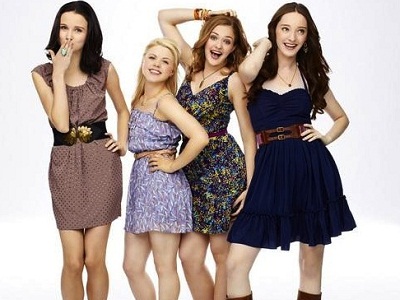 The Palladinos Own My Heart

. Have I mentioned how much I’m Loving Bunheads? It’s like an hour of pure joy once a week. And not guilty pleasure Bachelorette joy, actual Amy-Sherman-Palladino-Is-Back-On-TV joy. It’s like having Lorelai Gilmore back, but instead of Lauren Graham (with whom I have a love-‘annoyed by’ relationship) we get Sutton Foster (with whom I have an absolute love-love relationship!). She’s a double Tony winner, the original Millie, Broadway’s Jo March, a Flight of the Conchords vet, Christian Borle‘s ex, a singing, dancing, gawky salute to all that is awesome in the world- that’s Sutton Foster. And now she’s on my TV! And she’s not just on my TV, she’s playing a Palladino-spouting fish-out-of-water dance instructor at a studio run by Emily Gilmore! Actually, it’s run by Fanny Flowers, but Kelly Bishop plays her with the same bite and fancy condescension with which she played Emily so it’s pretty much like the studio is run by Emily Gilmore.

Watching an Amy Sherman-Palladino show is a lot like watching something by Aaron Sorkin, except that she takes herself a lot less seriously. She has major points of view, casting recurrences, tonal consistency, and trademarks that she likes to come back to over and over again (quirky small towns are very big with Ms. Sherman-Palladino; Bunheads even has Gilmore-like music). But the biggest similarity between Sorkin and Sherman-Palladino is a shameless dedication to their own style (which happens to be similar: fast-paced, reference-happy, dialogue-heavy, generally upbeat). In the latest Bunheads, one character (mini-Megan Hilty, Ginny) even utters a defense of Sherman-Palladino’s love-it-or-hate-it style “it’s funnier fast”. Ginny’s right, and Bunheads might even be more fun than Gilmore Girls with its balletic tie-ins and Sutton Foster-ness.

Foster is already a master of the whip-smart dialogue and Michelle is quickly becoming her best role since Millie (who was so Thoroughly Modern that she will never be beaten). Her triple-threat skillset is an awesome addition to the show because, as we saw last week, she can carry a comedic monologue While Tap Dancing and Michelle is particularly fun when actually engaged in the arts somehow (whether it’s teaching one of Fanny’s classes, belting out the song the writers will surely be giving her sometime soon to show off her insane Tony-winning voice, or nitpicking/helping to direct some ridiculous modern play like the one this week, mysteriously entitled “Blank Up, It’s Time”). The ever-developing Fanny-Michelle dynamic is endlessly interesting (I particularly enjoyed the “I just thought I would tell you” moment this week after the Hubble reality finally hit Michelle) and Michelle is simply a darn good main female character, which is a lot harder to actually find than it seems like it would be (there’s pretty much just Veronica Mars and Michelle- those are the only ones I can think of).

But as much as I love Michelle, there have been a ton of occasions when I’ve ignored her completely in favour of the amusing quartet of teenage ballerinas who are intent on stealing the show. All four are excellent and Emma Dumont, specifically, has grown so much since the pilot with her snarky Melanie that she might be my new favourite. But it’s Julia Goldani Telles who’s got the most interesting role. Under-supervised teens aren’t exactly a new phenomenon on TV but, through Sasha, Sherman-Palladino is actually exploring the behavioural and psychological consequences of that in a more interesting way than I’ve ever seen. There’s always a unique fascination to the most talented character and Sasha is Fascinating. I particularly love her relationship to the other girls. They love her in a deep-down/always-have kind of way but on a day-to-day basis they’d rather do without her. And she knows that. And it eats her up. Sasha’s defensive, crackling, attention-seeking meanness is such a stark contrast to Boo and Ginny’s sweetness (and even Melanie’s snarky wit) that she’s always having to win them back (like in the beautiful story about Boo’s toe shoes that solidified my love for Sasha). Ginny hasn’t been remotely interesting in awhile but Boo always has something to do whether it’s her struggles with her weight, her new job, her crush on Melanie’s brother or just delightful banter with her mom (the best parent guest star since Burt Hummel- armed with a “magic purse” that holds juiceboxes and cookies, Boo’s mom is so sweet and loving but frazzled and flawed that she prompts some of Boo’s more interesting moments like when she discovered a cake that said “Better Luck Next Year” before she even auditioned).

This week was my favourite Boo story so far when she was given Sasha’s Ginger Rogers role to dance (Fanny took it away from Sasha to punish her for getting an unauthorized tan). Abandoned by Jordan (SYTYCD‘s great Kent Boyd as Sasha’s super talented ego of a dance partner), Boo has to dance with shrimpy Carl. I feel you, Boo, it’s tough being 5’10 at 15 and having to dance with short boys (here’s where I shout out to my beloved partners Steven and Mike, whose 6’4+ frames kept me feeling nice and normal-sized on the dance floor in my early teens). Boo hates it in that totally normal way where she knows she’s not Sasha and that she should really be satisfied with Carl because she’s, you know, not Sasha, but she still wishes she could have Jordan and judges Carl for not being Jordan even though she’s not Sasha just as much as he’s not Jordan. You know? Hands up if you were able to follow that train of thought- good job, 50 points to Ravenclaw!

But Carl is lovely and wonderful and wins Boo over eventually in some fantastic scenes of tentative young awkwardness. But when he tries to invite her over for lasagna her friends swoop in and beat him off out of the goodness of their hearts. Honestly, it was the goodness of their hearts, they thought he was bugging Boo, there is no bad guy here. But Boo just went along with them when they called him a dweeb; embarrassed that she’d started to like him, she pretended she didn’t.

It was sad and honest (who hasn’t done that? I Still do that sometimes, well past the age when I should have stopped) and was the centrepiece to an episode that was generally sad and honest in a really lovely way. Sasha rebelled against Fanny’s rules and ended up quitting dance in favour of cheerleading even though she’s a truly talented dancer and cheerleading, as established earlier in the episode, is for untalented losers (I’d say that’s a spoiler but Sasha’s been on the precipice of leaving since day one). Add to that a lovely semi love story for Michelle (in which Hubble feelings came bubbling up in an interesting way) and a non-semi love story for Fanny that was full of bittersweetness and the casual perfectly-in-sync banter of a long-established something, and “Blank Up, It’s Time” was probably my favourite episode of Bunheads so far.

It was written by Dan Palladino, who understands his wife’s point of view adorably better than anyone else (he wrote the aforementioned joke about her dialogue speed) and therefore has a particular knack for not only her unique dialogue rhythms but her intricate character storytelling (he might even improve on her style- how ’bout that for a love story, eh? Making each other better and what not*). The Palladino in Sherman-Palladino knows that the definition of lovely is when a boy remembers something you said long ago (he has Carl bring celery tonic to rehearsal, remembering that he once heard Boo mention to Ginny that she loves it. She was wearing pink shoes, he remembered that too). It’s that sort of real-life sweetness (and the ‘overlooked’ sadness that’s in there too) that’s all over the latest and greatest in the town of Paradise, CA. I love Amy Sherman-Palladino but Dan makes her better than she is on her own so it’s together that the awesome happens.

*Sometimes I like to think that THIS is what Amy’s like when she has to write without Dan. Hey, don’t step on my romantic dreams, they can be however I want in my head!