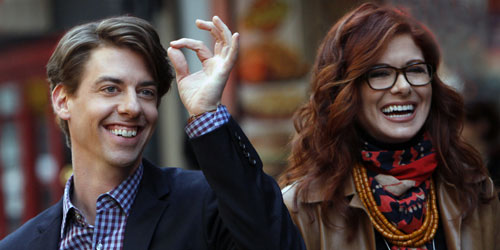 SMASH- The Show I’ve Been Waiting For

I was a little so-so on Smash after the premiere episode- expectations were high, as were pressures, and the exposition made for more Katharine McPhee screentime than is at all acceptable. All we knew about Debra Messing’s Julia was that she was a writer trying to adopt a baby; all we knew about her partner Tom was that he was gay and held grudges; we were introduced to Megan Hilty’s scrappy chorus girl Ivy as the antagonist to our poor little ingenue’s dreams and the show-within-the-show itself wasn’t looking particularly inspiring (that baseball number was all superficial posturing and simplistic construction- ick). So I ended up not watching for awhile as 4 new episodes piled up on my PVR. I don’t know why the show hadn’t captured my imagination- I had liked the pilot okay- but I wasn’t excited about it, so I left it there. I returned yesterday and finished this week’s episode mere minutes ago and, fantastically, inspiringly, excitingly, I’m bouncing on my toes with adoration and anticipation of next Monday.

Once the production staff finally made the BLATANTLY OBVIOUS right decision to cast the experienced, dedicated, charming, beautiul and massively talented Ivy over the decent singer but walking disaster (with obnoxiously mcguffin-tastic “Marilyn qualities”) Karen, we finally started in on the proper drama of theatrical creation, instead of wallowing in casting cat-fights. There remain a few straggling storylines clearly cooked up just in case the audience decided not to care about the well-constructed human drama fueling the series: there’s villain-tastic Ellis (easily the show’s flattest character), Tom’s self-important assistant whose only purpose is to cause Julia indigestion; the on-going tension of Karen’s dreams vs. her way-too-good-for-her boyfriend’s career (oh, and, new last episode, a hot girl at his office) and Karen’s dreams vs. her parents/Iowa values- but that’s about it for draggy, over-dramatic storylines that feel unnecessary and predictable. Julia and her husband Frank’s adoption is, at the moment, mostly filler behind her more intriguing stories, but filler I’m fine with.

The rest of the show much more closely resembles the sort of honest drama that accompanies theatre folk, especially when they are met with the business end of their business. Eileen’s quest to produce her first show without her husband is held up mostly by the wonderfully broad shoulders of the regal Anjelica Huston, and kept to just the right amount of screentime to stay interesting; Brian d’Arcy James has barely appeared as Frank so far, as has Emory Cohen as his son Leo, but that’s because, at the moment, their characters are far less compelling than the other two men in Julia’s focus- Tom (Christian Borle) and Michael Swift (Will Chase), the actor recruited to play Joe DiMaggio. The relationship between writing partners Tom (music) and Julia (book and lyrics) is the best thing about the show- a complicated, loving, nuanced and very real friendship/working relationship that is written and performed brilliantly enough to give weight to their claims of “sharing a brain”, among other things. Messing is a beloved TV star in my eyes and her role in Smash is only solidifying that fact. She is fabulous as the strong-willed but compassionate anchor of the show- stretched-too-thin, responsible for too many people, quick to snap but willing to compromise; sorry PJ Franklin, I have a new TV character model. Julia’s story got even more interesting with the addition of Michael Swift into the fold (my desperation for them to keep studly actor/swoony tenor Will Chase on the show as more than a guest star is immeasurable). From the moment they mentioned Michael’s name to Julia I assumed they’d had an affair, which they had, which is usually boring, but in their case is sensational. There’s insane chemistry between Messing and Chase and the way the writers have been playing with the (Very Real!) phenomenon of the leading-man crush is spot-on.

Tom himself is also a treat of a character- the amusing familiarity of his hesitantly budding relationship with a man his mother set him up with, his childish hatred of director Derek Wills (Jack Davenport), his unconditional love for Julia and Ivy, his wealth of talent (seen, most hilariously, as he spontaneously composed a song about how much trouble Leo would be in when Julia found out he was arrested for smoking pot). Borle’s a favourite of mine from his role as Emmett in the Legally Blonde musical (no, really, it’s awesome, and Borle’s got a beautiful voice and charisma coming out of his eyeballs), so I knew I would quickly fall in love with Tom, but the sheer wonderfulness of his rapport with Julia is enough to slay me, even if he didn’t have any number of brilliant subplots going as well.

Broadway knockout Megan Hilty is perfect to play the conflicted, ambitious and self-doubting Ivy Lynn (a characterization that isn’t subtle but is effective in its Marilyn parallels). An insightfully developed relationship pre-exists between her and every character established in the industry, and each of those friendships, including those with barely-on-screen chorus members, has its own unique rhythms. That little detail is such a testament to the complexity and realism developed in the world of Smash– it’s as interconnected and personal as the real theatre world and the fleshing out of characters like the dancers who teach Karen how to be in the chorus is one of the keys to the show’s success. Karen herself is still annoying, but hopefully the show will eventually lose its fascination with wide-eyed McPhee and focus on the superb ensemble that surrounds her.

There’s a real maturity to these characterizations, and anyone who thinks Ryan Murphy is doing the world good with his cartoons over on Fox needs to spend even half a minute with the wide range of human beings on this Theresa Rebeck creation (no matter their sexuality, race, socio-economic background- these are interesting, detailed characters for whom each of those things is merely one adjective, not a singularly defining characteristic). Even pseudo-villain Derrick has his moments of real humanity. He could easily have become a one-note British monster or power trips and actress seductions (and still could), but I’m hoping that those moments of vulnerability and true caring (as well as loyalty, most notably to Eileen) are hinting at the real (if flawed) guy worth rooting for beneath the trappings.

Smash is fantastic. Even the musical-within-the-show has improved from that atrocious baseball number in the premiere- the group numbers are still a little simplistic but I enjoyed the awkward ambiguity of “Let’s Be Bad”, and the sweet DiMaggio-Monroe duet “Mr. and Mrs. Smith” fully captured my heart. The most recent episode saw the show give in to the all-too-real temptation to use songs less organically (ie: on street corners, instead of just in rehearsal and at karaoke bars) but I didn’t mind much (well, “It’s a Man’s Man’s Man’s World” was dumb, but oh did “A Song for You” make my heart beat a little faster -Will Chase, where have you been all my life?!). Only New Girl has gotten me this psyched about a show in the past year, and if Smash doesn’t make it onto NBC’s fall schedule it will be a massive mis-calculation. Here’s hoping my love will live on until I can see Marilyn: The Musical premiere on Broadway (a TV tie-in show starring Megan Hilty and Will Chase? Where do I buy tickets?!)