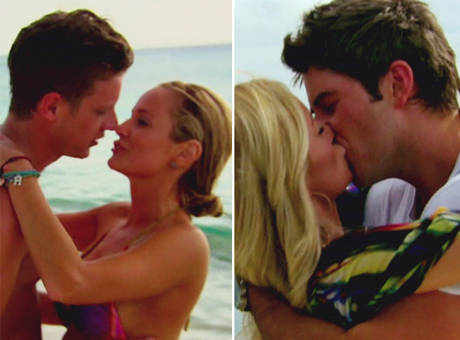 Emily, Her Fiance, and No Other Guys

UPDATE:
Tonight’s Bachelorette finale was, as Chris Harrison has been promising all season, a doozy. I was not expecting that. For one thing, when Chris Harrison says something is “the most dramatic ever”, it’s hardly ever true because he says it so damn often. But, really, the reason I didn’t believe this week would at all be The Most Dramatic Finale Ever (or at least since Jason Mesnick’s Crazy one) was that I was sure she picked Arie in, like, week 2 and was done. From there it would all play out like Ali’s season– a little drama here, a charming runner-up there, she chooses the guy who’s always been her favourite and we move on. But nothing about Emily Maynard has been predictable so far, so I’m not sure why I let myself be so sure.

Over a month ago, when I posted my Bachelor Scale, I was sure Arie was her number one guy. I knew I liked Sean best so I put him in second place and I felt like Jef would stick around so he went in third. From there I got it pretty much dead on- the order in which she dismissed all the guys who never had a shot (you know, the easy part). But I’ve rarely gotten the top 3 so mixed up- my bad.  I have two guesses as to why I was so offbase with Emily: the first is that I, myself, was never particularly attracted to Jef… no, really, it does make a difference. While Ashley’s choices were sometimes all over the place last year, I liked JP from the second he got out of the limo so he topped my Bachelor Scale even if I wasn’t convinced she would pick him until after she gave Ben the boot. But Jef- meh. I think it’s the stupid hipster hair, or maybe the mono-poetic way of speaking, either way, I never really was all that into Jef, whereas I’ve been smitten with Sean for half the season and Arie is damn TV-sexy (he might be the best onscreen kisser since Pacey Witter). I wouldn’t have picked Jef, so it took me a long time to see that Emily really might. My second hypothesis has to do with my romantic ideals (all movie-based, few at all practical). I really liked, especially in a high-drama situation like this, the idea of Emily and Arie riding out the storm together. They fit together so well so fast and he was the first person she looked to all season. In contrast, her relationship with Jef started out incredibly awkward- he didn’t take her cues, she got nervous when he was around- it looked like a lot of work. I always want to believe that there’s a certain amount of “you just know” in the world and Emily and Jef didn’t fit together at all until they were lying on the floor of that library in Prague. But I guess from there on, if I’d been paying more attention, I would have seen the way Jef wasn’t entirely full of it the 400 times he said “she just gets me… we’re perfect together”. I wouldn’t have picked him, and they didn’t make sense right away in a soulmate/puzzlepiece kind of way, but now that it’s all over I finally get it.

Who knows if they’ll actually make it to the wedding they want to have next spring, but there’s a lot that’s promising about Emily and Jef coming out of tonight’s finale. It’s good that they already have a plan (he’s moving to Charlotte), that they’re still beamingly happy, and that they managed to see each other almost every weekend during the run of the show (that’s when most of the couples hit the rocks). But mostly I think what’s promising is Jef’s confidence. He’s not going to get jealous when someone hits on his hot fiancee or when she spends time with guys down the road. Jef’s so confident that when Arie was struggling with letting Emily go, Jef was the one to talk him through it. Usually, watching the show air drives the chosen bachelor mad and the very idea of her other relationships is a sticking point, but Jef seems to get it more than most and the fact that he and Arie are still friends is nothing short of impressive (for both of them). Jef and Emily don’t  really make sense to me. But they make sense to each other, and that’s far more than can be said of most Bachelor couples.

On to Bachelor Pad tomorrow night- where Kalon will find redemption, Chris will take a nosedive, (one of my all-time favourites) Reid will finally take on Ed, and Michael Stagliano will find himself, once again, on bended knee. I can’t wait.

PS: I was thrilled, as I always am, to see the former contestants back. None more than Ashley and JP- my favourite Bachelorette couple. After a season where I only marginally liked a few of the boys (really only Arie and Sean, out of all of them), it’s nice to remember my great love of JP and how hard I was and still am rooting for him and Ashley. The lowest key couple in franchise history, I really think there must be a Bachelorette wedding officiated by Chris Harrison coming soon. At least I hope so, because they’re my gives-me-hope couple.