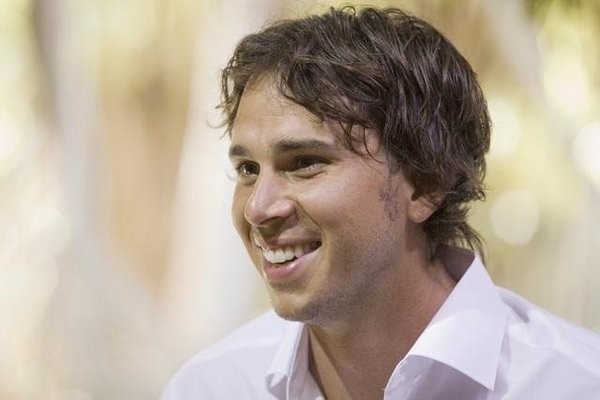 Let’s start with the man himself. Ben was far from my favourite on Ashley’s season of The Bachelorette. He wasn’t my least favourite by a longshot but, in the shadow of JP, his slightly awkward long-haired dopey guy thing seemed awkward and dopey instead of sweet. So you take a guy I like okay and give him a pile of hot girls and it never fails to bring out the worst. The more he was “digging the brunettes” and “letting himself be open to love” the more I wanted ABC to finally cancel The Bachelor and realize that The Bachelorette is the far superior incarnation (the girls are less sleazy when they’re in charge than the guys are and the show’s demographic would simply rather watch a 25:1 guy:girl ratio than a girl:guy one, if only because the guys talk less). But he really is growing on me. A couple weeks ago, EW’s Inside TV podcast posed the question “Ben: hot or not” to its 2 female cohosts. Their response was that the hair needs work and he’s not the most attractive ever but he runs circles around the Ken dolls who’ve been the Bachelor for the past few seasons. So I got-to thinkin’, Ben really isn’t my type, but they’re right, he’s well above the Bachelor average. My favourites from The Bachelorette (against whom I was judging Ben) never become the new star- they always get picked then engaged or dumped too early, or they opt out because they have real lives to attend to (here’s lookin’ at you Reid). He really should not have gone skinny dipping with Courtney (I’m sure he got a pretty angry phone call from his not-Courtney fiancee when this episode aired, why don’t they ever think ahead?) but Ben’s really pretty alright for the most part- he’s oodles smarter than Womack, ten times more sincere than Pavelka and a ton more fun than Mesnick. Now, if only he would cut that hair…

So, on to the women. For the same reasons as everyone else, I love Kacie B. She would make the perfect Bachelorette next season, too bad we’re stuck with Emily from Brad’s season instead. (Way to eliminate the serialization, undermine Ashley’s season and set us up for months of boring Barbie perfection). So in place of actually being the Bachelorette, I guess I want Ben to pick Kacie so at the very least she doesn’t get her heart broken on national TV. Also, they’re cute together and have the best chemistry of the lot. I also disproportionately love Jamie, who’s gotten a total of 3.4 seconds of screentime, and Jennifer whom I’m very fond of (for all her regular girl fun-ness) and who I really was expecting to take third or fourth place.

I really liked Emily early on but never take kindly to the girl who spends the whole season bitching about the girl she doesn’t like instead of courting the man she does. If it had been a one-off warning thing I could get over it (after all, Jake did win points for ratting out Wes in Jillian’s season), but all she does is complain about Courtney- isn’t she the smart one? I’m bored by the other Casey, greatly annoyed by (and mildly worried for the mental well being of) Blakely and truly apathetic towards Rachel (I like her but she’s clearly wrong for Ben) and Nicki (the story of her divorce really does give me pause- it seems so very naive, her approach to marriage). I didn’t like Elyse much (who misses their best friend’s wedding to go on The Bachelor?!) but seeing her genuinely hurt by Ben’s rejection (even though he was right to do it), I started to feel for her a little bit (and she’s right, she didn’t really get a chance to get to know him at all early on- she made it 4 episodes going on only 1 date).*

Looking back on earlier this season, Jenna was worryingly unhinged, I was just beginning to like Monica when she left and Samantha was everything that’s wrong with this series (kudos for sending her home prematurely on that group date- I like when they make strong decisions).

Which brings me to the personality of the season- Courtney. I’m thinking she might just be a victim of her own snark. Like Michelle Money before her, Courtney is playing the villain but I think she’s mostly just trying to make us laugh. She’s competitive and defensive and, I’m willing to bet, just generally not very good with women; pair that with dry, uncompromising (and somewhat unnecessary) wit and you’ve got someone who’s going to put all the other girls on edge- and maybe push them off a little. I’m never fond of the girls who are in it just to win a competition (actually, the guys are even worse about that) but I get less of that sense with Courtney than I was expecting to. I don’t think she loves him like Kacie does or Jennifer did, but she’s not obsessing about beating the other girls like I thought she would, I think she just wishes they’d go away. And sometimes she’s malicious about that, but I don’t really mind, because she’s pretty funny (though I do wish she’d stop using that ridiculous Charlie Sheen catchphrase- you can tell they filmed this a couple months early when that was more of a thing). And this week she quoted A League of Their Own (“There’s no crying in baseball”) right after dropping this gem about Blakeley’s surprising athletic ability: “Who knew that strippers could play baseball”. He shouldn’t keep her to the end because I just don’t see that as a relationship that will work out, but she certainly isn’t the monster some of the girls honestly believe her to be. At least, I don’t think she is…

But I am struggling with some of Ben’s decision making abilities. The grace of her exit alone should have told Ben just how great of a girl he just let go in Jennifer. How on earth are Blakely, Casey and Emily still there after the great date he had with Jennifer last week? She’s fabulous. Please, Chris (or whoever’s actually in charge), make sure she makes it onto Bachelor Pad at some point so we can see more of her.

Looking forward to the weeks to come, it looks like Courtney’ll be going down once some of the girls who really have Ben’s ear speak up about her. Next week’s dates seem to belong to her and Kacie B (which I’m all for, but what about poor Jamie?) and a little time is going to Rachel (really?). I’m thinking next week will be the end of the road for Emily (and for Casey, who goes home because of some sort of tragedy- my guess is a family member dies and it somehow lands on Chris Harrison to tell her). The previews have me thinking that this thing comes down to Lindzi and Kacie B and whomever’s in that hideous black dress for the finale takes it. You know, she’s pretty damn perky for my taste, but Lindzi and Ben might actually be a pretty good fit. We’ll see.

On a sadder note, I was heartbroken to hear that Ali and Roberto broke up a while back and completely forgot to write about it. I really liked them. She picked him on day one and essentially went through the motions until she could be with just him- the only other time I remember that happening was with the show’s most successful couple, Trista and Ryan back in Bachelorette season one. I thought Ali and Roberto were the couple to transcend the series curse, but apparently not (and I never would have predicted Jason and Molly would make it, so what do I know). I’ve got my fingers crossed for Ashley and JP though, I love them together. Either way, I guess we’ll always have Chris L and Peyton to reassure us that love is out there.

PS: did you catch the awesome shot of the producer (cameraman?) hiding his face behind cardboard as Elyse climbed into the boat? so shoddy! I loved it.