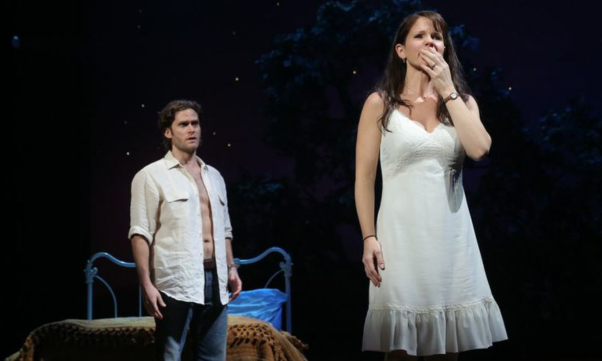 New on Broadway: The Bridges of Madison County

The producers of The Bridges of Madison County: A New Musical have constructed a show with an award-winning formula: combine one of the best selling books of the 20th century (turned Oscar-nominated film), the powerful voice of Kelli O’Hara and a handful of incredibly talented performers, the acclaimed direction of Bartlett Sher, and a Tony-Award winning lyricist with a cult-like following of fans (myself included). Yet, after seeing the show, I am perplexed – as a whole, TheBridges of Madison County struggles to live up to the sum of its parts.

Despite the popularity of both the book and movie, I entered the Gerald Schoenfeld Theatre having never been exposed to Bridges. However, it is unsurprising that the story gained widespread popularity. Bridges is, at its core, a love story. With the golden corn fields of Iowa as a backdrop, Francesca (Kelli O’Hara) plays the role of dutiful housewife to Bud (Hunter Foster) and two teenage children (Caitlin Kinnunen and Derek Klena) while secretly lamenting the loss of a life less ordinary – a life that she could have had if she had not left her Neapolitan home after World War II to marry Bud. While her family is away at the Indiana state fair, the patron saint of Iowa housewives answers Francesca’s prayers in the form of an extremely attractive and worldly photographer from the National Geographic (Robert, portrayed by Steven Pasquale) who comes to town to take pictures of the covered bridges. Whether she is in love with Robert or merely in love with the idea of fleeing her mundane farm life, after four passionate days together, Francesca must make a decision – stay with Bud and her children or join Robert for the adventure of a lifetime.

Francesca’s choice is allegedly a difficult one, but therein lies the first failing of Bridges. Marsha Norman’s book captures the developing relationship and romance between Francesca and Robert, but it fails to bring life and give dimension to Francesca’s family. In fact, all of the characters that surround Francesca and Robert are caricatures, and some storylines that could bring depth to an otherwise plodding plot are introduced and then neglected. For example, the many state fair scenes successfully highlight the annoying traits of Francesca’s children. However, when Robert Kincaid’s ex-wife is introduced into the story, her existence is acknowledged and quickly ignored, begetting the question – why introduce her at all? Norman’s attempt to develop a world outside of the love affair of Robert and Francesca is wholly unsatisfactory, and the play grinds slowly along because of it. It also makes Francesca’s final decision to stay with her family or run away with Robert a less compelling one. Francesca’s opportunity to choose between a lifetime with her angry husband and two bratty children in Iowa and a lifetime with a stunning, talented and well-traveled artist isn’t a choice. It’s a gift.

I have seen musicals with problematic plots that were redeemed by an amazing score. Jason Robert Brown has been one of my favorite musical composers and lyricists for quite some time. Between the scores of The Last Five Years, Songs for a New World, Parade, and 13, I cannot make it through a five-block walk in New York without at least one of his songs playing on my iPod. Bridges includes some resplendent moments of musical artistry that reminded me of why I love JRB’s work. Sadly, it also includes numerous operatic, wistful arias and romantic melodies that grow tiresome. Full cast numbers like “You’re Never Alone,” during which Bud and Francesca’s neighbors explain the hardships and support systems that form the backbone of farm life, liven up the show, but it is the powerful romantic ballads sung by Kelli O’Hara and Steven Pasquale that steal the show, including “One Second & A Million Miles” and “It All Fades Away.”

I amend my last statement. Kelli O’Hara steals the show. Bridges is defined by the brilliance of her performance. I last saw O’Hara in the charming Nice Work if You Can Get It, which hardly did her justice as a vocalist. The soaring operatic arias in Bridges are a perfect platform for her to showcase the range of her voice, and O’Hara’s layered emotional outpouring while singing is mesmerizing. O’Hara’s Francesca is vulnerable, sorrowful, and passionate – she is the heart and soul of Bridges, and O’Hara’s nuanced performance is beautiful. Pasquale’s portrayal of Robert complements O’Hara’s performance, and the two have a believable chemistry on stage. Unfortunately, Pasquale is made to look like he stepped off the cover of a smutty romance novel, but he proves to be a capable actor and a praiseworthy vocalist. Despite having very little engaging source material to work with, several members of the supporting cast merit recognition. It is a crime that Bridges was my first experience seeing Hunter Foster on stage. He is particularly good at playing a lead  “every man” (an “every man” with a ridiculously good voice, of course). Moreover, the enjoyable Cass Morgan and Michael X. Martin (portraying Francesca’s nosy neighbors) are underutilized as comedians and performers.

The focus on stage is most assuredly the performers, because there is little to appreciate about the stark set, which is merely a backdrop for the love story developing between Francesca and Robert. Even the glorious covered bridges that bring Robert to Madison County are reduced to a silhouette created by a few planks of wood maneuvered on stage by the members of the ensemble who sit on stage throughout the show (reminiscent of the staging in Thornton Wilder’s Our Town, but far less effective). The real technical artistic achievement in Bridges is Donald Holder’s lighting design, which compliments the show beautifully.

Ultimately, given the level of talent associated with Bartlett Sher’s production of Bridges of Madison County, Bridges should be a sweeping and absorbing love-story with creative staging and compelling music. It is disappointing to find that Bridges moves along in fits and starts and is replete with dull interludes of song and story. The one aspect of the show that never disappoints is Kelli O’Hara who continues to prove that she is one of the greatest musical actors on the American stage.