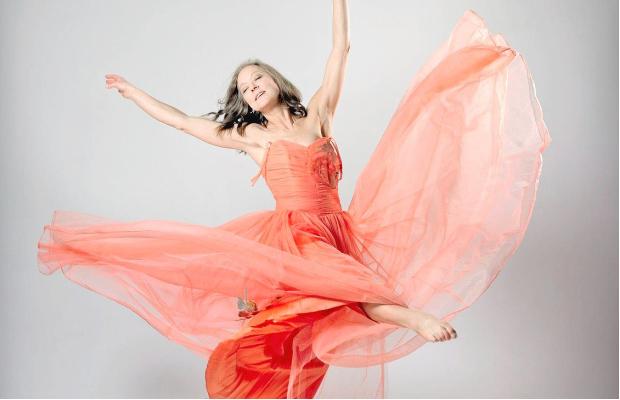 “What I love about dogs,” Denise Clarke mummers as she begins imitating a dog’s slow building tail-wag, “is that they can’t hide their emotions.” Despite the audience’s noticeable lack of tails, we all had trouble hiding our gleeful experience of wag, which opened this past Thursday as part of the Magnetic North Theatre Festival in Halifax.

wag is a contemporary dance piece meets solo show. As Clarke navigates her experiences of loss, she embarks on a cheerfulness project. The goal: to make her happy. Freaking out dogs is one part of her cheerfulness project. Dancing in public, rehearsing choreographic book lists, and pink dresses are a few more. Clarke waltzes us (literally) through her favourite songs, her hilarious dance impulses, and her personal worries. A natural performer, mover, with spot-on timing, you can’t get enough of Clarke; I could have danced all night.

The show opens with Clarke walking on stage in a snowsuit, telling us she is on her way to the theatre, three days before Christmas. Well, no, that’s not entirely true. The show actually opens when you walk into the theatre yourself, and see the words “There was nothing to fear and nothing to doubt,” lyrics from Radiohead, projected on the stage. Clark comes on stage, and after a short bit of exposition, dances in the snow, describing her dance moves, as if they were some kind of jazz poem (her words). This opening not only enables a different, and hilarious interaction with dance, and indeed, Clarke herself, but also sets up for what is a show about crossbreeding art. Throughout the show, Clarke turns literature into a dance, turns dance into a poem, and throws it all together to the tune of Rhapsody and Blue (among others).

While these elements of the show are engaging on their own, what protects them from being ‘cute’ or, heaven frofend, gimmicky, is the heart of wag. Just as Clarke is and honest, engaging and hilarious performer—spouting lines such as, “like the world really needs another fucking solo show”— so too is her show heartfelt, intimate, and joyful. As we learn about the reasons behind her cheerfulness project, we uncover that Clarke is not just dancing in a snowsuit, she is exploring the weight and restriction of grief and loss on her body and her movement. As she sheds the baggage she brings with her on stage, she attempts to move freer—ending the show in a flowing pink dress, in which she joyfully waltzes. Yet—like the dog that can’t hide the way it’s feeling, so too does Clarke express her emotions freely on her face and through her dance. Moments of anxiety flash across her face and through her movements even as she attempt to 3-step her worries away.

It’s this integrity of emotion and movement that makes wag an engaging happy piece of theatre. But this is not a happiness that attempts resolution. Just like the waltzers go round and round, coming right back to where they started, Clarke ends back in the snowsuit, walking to the theatre. This is perhaps why she has decided to repeat much of the same choreography throughout the performance—the one weak point of this show— because sometimes we may find solace in repetition. The point is not to drive the demons of loss and grief away, not to purge them through some kind of Aristoltian catharsis. Rather, Clarke dances with her demons, exploring how she moves and is moved by grief and joy.

wag is written, directed and choreographed by One Yellow Rabbit’s Denise Clarke. It was performed at in the Neptune Studio, at Magnetic North’s Theatre Festival, June 19-22.