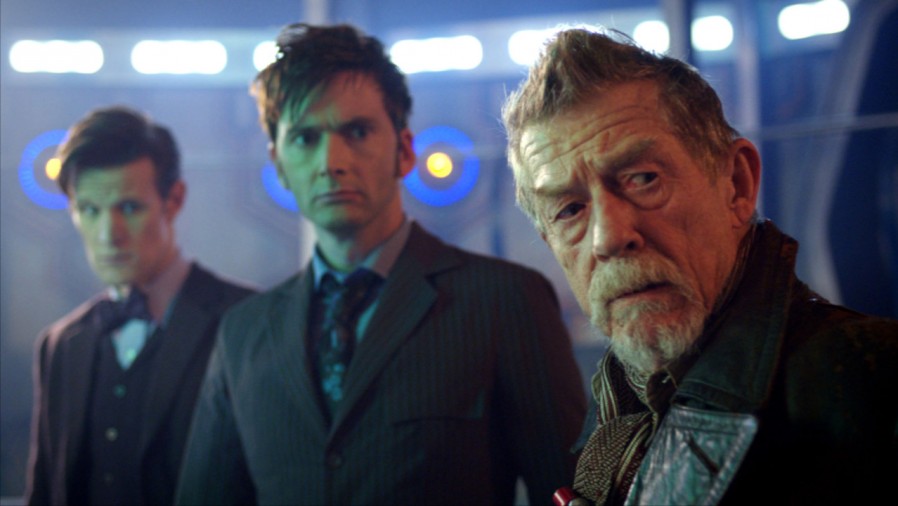 Doctor Who Turns 50: “The Day of the Doctor”

The “Day of the Doctor” has finally arrived. As a standalone episode, it was fantastic. As a celebration of the past 50 years of the show? …it could have done better.

The 50th anniversary special was one of the best episodes the show has had in a long time. The pacing was great; it featured three different Doctors, each with their own storyline, before bringing them together in a way that felt natural. The Zygon storyline was particularly entertaining. It was an excellent reintroduction of a Classic monster into the revived series. The Zygons were threatening, but there was enough humor interjected into the situation so that the episode retained a feeling of Whoness.

Jenna Louise Coleman continued to shine as companion Clara. You may have noticed Clara missing from our top 6 modern companions list. This was because I really like Clara, but she wasn’t given a lot to do in Season 7. She was treated more like a sidekick to the Doctor, where the other companions were treated more like partners. This episode established her as capable of taking charge of her own destiny, which she hadn’t really done until “The Name of the Doctor”.

For most of Season 7, the Doctor kept Clara in the dark about mysteries surrounding her life. The “Doctor knows best” mentality the show takes is sometimes obnoxious, so it was nice to see Clara somewhat in the loop this episode and serving as a moral compass. And it was nice to see her have a life outside the Doctor, albeit briefly. Clara has a job and a life, and travels part-time, a la the Ponds. She also had probably the best moment in the episode: after the three Doctors came up with a complicated plan to break open the door with their sonic screwdrivers and were busy congratulating themselves, Clara burst in to rescue them…because the door had been unlocked the entire time.

David Tennant was also excellent in this episode. I forgot how much I loved Ten until he came on the screen. Tennant slipped back into his role as the Doctor so easily, it was like no time had passed at all. He and Matt Smith played off each other well. They quickly established an easy banter, and transitioned effortlessly between enthusiastic partners, and animosity (which could be considered a form of self-loathing?). John Hurt’s War Doctor rounded out of the trio. He was like a cranky grandpa, unable to believe his future selves. Regenerations these days with their ridiculous shoes, and made-up words, and flailing limbs.

Hurt did an excellent job in his guest role, as did Billie Piper, returning to the show after her last cameo in 2010. However, as much as I enjoyed their performances, the cynic in me thinks bringing them in was only to bolster ratings. Contrary to fan speculation, Piper did not reprise her role as Rose Tyler, but instead appeared as the conscience of a Time Lord weapon, guiding Hurt’s War Doctor through his decision to commit genocide against his own people. The conscience could have taken any form. Hurt’s incarnation wouldn’t have met Rose yet, so it’s curious the interface adapted her form. I’ve read several fan theories as to why it chose Rose’s form, and a lot of them are interesting, but I still think the primary reason for bringing Piper back was “if fans see Billie Piper in the preview they’ll definitely tune in”. Maybe this is just me being bitter we didn’t get to see Billie Piper have one last go at playing Rose.

I also question the reasoning in bringing John Hurt in. I absolutely loved his War Doctor. He was a man who was on the brink of making a terrible decision, and had the weight of the world on his shoulders. It’s been established the Doctor ended the Time War before his Ninth incarnation. So my question was: why bring in John Hurt at all? Paul McGann, who played the Eighth Doctor did a minisode. I think he could have done a great job in an actual episode. John Hurt is of course legendary, and incredibly talented, but their decision to bring in a big-name actor when McGann is still around felt a bit like stunt casting.

My other “I liked it but question its necessity” was the storyline with Elizabeth I. The Tenth Doctor’s dalliance with the Virgin Queen has been a long-running joke of the show. I never needed an explanation of what happened with Elizabeth I. You could fill in the blanks: the Doctor had a fling, ran away, leaving behind a very pissed off Elizabeth. Which is essentially what transpired in this episode. Granted, there were a few Zygons involved that I don’t think anyone expected, and I did enjoy the subplot. But if the show wanted to dedicate time to revisit its past, they could have incorporated old companions or Doctors, or other Classic enemies rather than a historical figure that didn’t require much more explanation.

This was my biggest problem with the special. Instead of subtle nods (especially everything predating the 2005 revival) to the past, I wish they had embraced it more. Instead of catching a glimpse of Susan or Barbara in a photograph, it would have been cool to see old companions or earlier Doctors in the flesh. Especially since all Doctors except the 11th wouldn’t be able to remember the events because of time streams, why not bring more of them back? There was a cool moment when thirteen incarnations of the Doctor came together to save Gallifrey, and there was the great ending shot of all the Doctors standing together, but rather than satisfy my craving to see more of the past elements of the show make an appearance, it left me wanting more, and not in a good way.
And let’s talk about Gallifrey. It’s great that the Doctor found a way to save his home planet. It goes against the established events of the revived series, and I’ll have to do some major rewatching to try and reconcile this new information with what’s already happened. (Wasn’t the Time War time-locked?) But the prospect of Time Lords coming back once the Doctor refinds Gallifrey is such an intriguing one that I’m not going to nitpick over continuity. At the same time, it felt like an attempt to sweep the established past under a rug and focus on how exciting the Christmas special is going to be when they go looking for Gallifrey. That was my other big problem with the episode; whenever it acknowledged the past, it felt like it was trying to one up itself. The 50th anniversary special should have felt like a celebration, not a competition.

That being said, there isn’t a way to appease everyone. If more of the old elements of the show came, people would complain it was being too nostalgic. The subtle nods were nice, and I geeked out when Tom Baker (the Fourth Doctor) made his cameo at the end (also when we saw Peter Capaldi- the Twelfth Doctor make his first appearance- even it if was only for two seconds). The flashbacks to the Time War were also great. It’s an event that was referenced for so long, it was nice seeing some gaps filled in.

The best way to approach the 50th anniversary special (I think) is to look at is as an not as a single episode, but as an event with many different parts. For those like me who wish they included more of old Who in the special itself, there’s a great sketch some of the earlier Doctors, cast members, crew members, and other celebrity guests participated in that might appease. While I think “The Day of the Doctor” could have done better incorporating the past 50 years, it did have a lot of subtle nods that were well done. And it juggled a lot of different components without making the episode seem like it was trying to do too much, while featuring a lot of tense, emotional moments, brilliant one-liners and thrilling heroics. It was a strong episode overall, and you should watch and judge for yourselves.

Also be sure to check out Parts I, II, III,  IV and V of our Special 50th Anniversary Coverage.