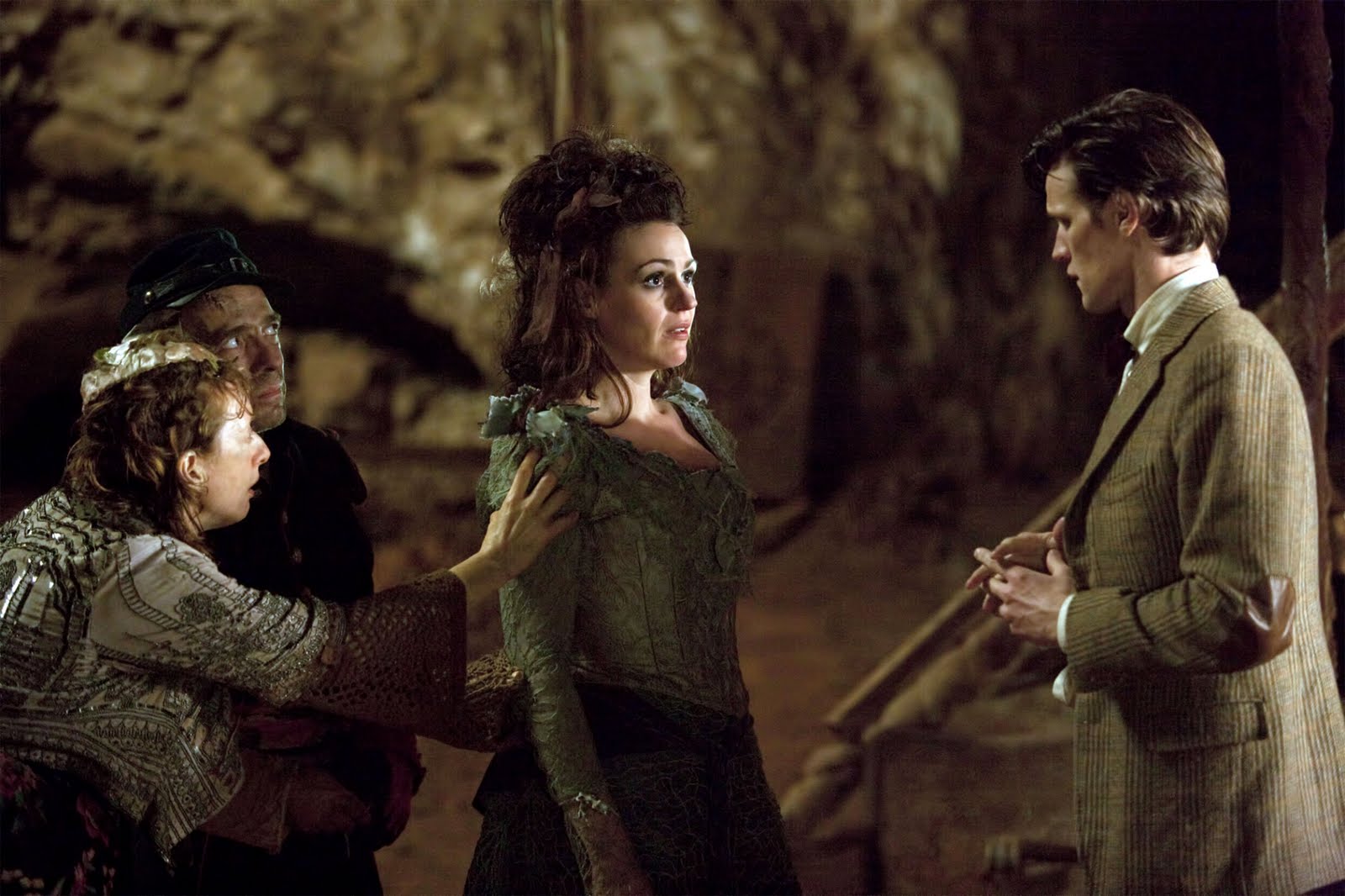 Given the close-knittedness of the British acting pool, it should come as no surprise that Doctor Who has had some amazing guest stars over the years. Narrowing it down to a list of just 12 actors was a difficult challenge, even when limiting the list to just the 2005 revived series.

To make it easier, the list is limited to guests who only appeared in one episode (or one two parter episode). Because otherwise it gets into the sticky area of ‘is this character a companion?’ or potential recurring character territory. So to keep it simple: one episode only. (Sorry, Bernard Cribbin, Mark Williams and James Cordon).

Choosing the list was incredibly hard. The list is strictly based on the performance given in the episode. It couldn’t just be actors we like in general (Andrew Garfield, Hadley Fraser, Colin Morgan), or actors we would really like to hang out in a pub with (Simon Pegg).

11 & 12. David Mitchell and Robert Webb
“Dinosaurs on a Spaceship” had a ridiculous amount of guest stars for one episode. The two best (and for some reason, least publicized) were David Mitchell and Robert Webb. The comedy duo (best known for their long running sitcom Peep Show) voiced a pair of sarcastic robots. “Dinosaurs on a Spaceship” felt like it was trying too hard to be big and epic, but never quite managed. In contrast with that, Mitchell and Webb’s banter and comedic timing felt incredibly natural. Though their parts remain overlooked – maybe because you never see their faces?- they were a high point of an otherwise so-so episode.

10. Georgia Moffett
Moffett could have gotten an honorable mention on this list for her Doctor Who connections alone. She is the daughter of Peter Davison (the Fifth Doctor), and wife of David Tennant (the Tenth Doctor). However, Moffett earned a spot by her charming and cheeky portrayal of Jenny in “The Doctor’s Daughter”. Jenny was a soldier clone, made from the Doctor’s DNA. Although the Doctor was reluctant to accept her as his daughter at first, they bonded over the course of the episode. The Doctor taught her how to make decisions, rather than mindlessly follow orders, and Jenny brought out a softer more paternal side. Sadly, their time together was cut short with Jenny’s apparent death. Of course, having Time Lord DNA meant Jenny was able to regenerate. While chances of Moffett returning are slim, it’s nice to imagine Jenny and the Doctor met up at some point and had more father/daughter adventures.

9. Michael Sheen
Though he never physically made an appearance in Doctor Who, Michael Sheen still managed to make quite an impression as House, a bodiless entity who lures TARDISs and their Time Lords just outside of the universe, where he feeds on the TARDIS energy and leaves Time Lords to die. After abandoning the Doctor in a bubble universe, House proceeded to psychologically torment Amy and Rory just to amuse himself during his trip before deciding to kill them and the Doctor.

Despite not having a physical form, House was still a menacing force to be reckoned with. While Sheen is always a delight to watch on screen, he proved he can deliver a memorable performance using his voice alone.

8. Toby Jones
Jones played the creepy villain, the Dream Lord. He played mind games on the Doctor, Rory, and especially Amy. His plan involved presenting the trio with two scenarios: one real, one fake.

The Dream Lord aggravated the relationship between the Doctor and his companions, by bringing up their most sensitive insecurities, making him an effective antagonist. Why just try to kill people when you can try to destroy the emotionally too? In an interesting twist at the end, the Dream Lord turned out to be the darker aspects of the Doctor’s personality that manifested themselves in a psychic pollen induced shared dream. Jones did an excellent job at portraying the more sinister aspects of the Doctor.

7. Thomas Sangster
During “Human Nature”/“The Family of Blood”, the Doctor became a human named John Smith for two episodes, with no memory of his life as a Time Lord, leaving it up to his companion, Martha, and Tim Latimer (Sangster) to save the day. While Tim probably caused as many problems as he helped solve, when he discovered the Doctor’s real identity, and saw all the good things and the bad things the Doctor had done over his life, it offered the audience a new perspective on the titular character. His acceptance of the Doctor despite some of the terrible things he had done helped John Smith embrace his true identity and become the Doctor once more.

6. Lindsay Duncan
In “The Waters of Mars”, David Tennant’s penultimate episode, the Doctor had been travelling alone for a while, and was going a little crazy from grief and loneliness. Then he met Duncan’s Adelaide Brooke, the smart, capable, no-nonsense commander of a Mars colony. She was calm in the face of danger, and despite her stern exterior, clearly cared deeply about her crew and did everything she could to protect them. Adelaide was also a much needed voice of reason. When the Doctor decided to save Adelaide and a few of her crew members, knowing it would change a fixed point in time and rewrite human history, Adelaide was the one to bring him back to earth, admonishing him for his arrogance. She ultimately killed herself, setting history back on track, and forcing the Doctor to realize he had crossed a line, and had finally gone too far.

5. Tony Curran
Bringing historical figures on Doctor Who is a bit of a gamble, especially when it’s one as iconic as Vincent van Gogh. Curran’s performance of the tortured artist was heartbreaking without being melodramatic. He was a man who was wrestling with depression and inner demons, but who still put on his hat and went out to fight actual monsters, and that’s pretty incredible. The best scene of the episode, (and one of the best of the season) is when van Gogh goes into his future, and sees his pieces in a museum, and realizes the impact his art has. If you are prone to crying, I recommend having some tissues with you.
Since that scene cannot be found on Youtube, enjoy a cameo by Bill Nighy as the museum curator from the same episode. (If we had a best cameo category, Bill Nighy would place first, hands down).

4. Sophia Myles
Before Amy Pond was ‘the Girl who Waited’, there was Reinette. Reinette initially met the Doctor when she was a little girl. As she grew up, he kept popping in and out of her life, and she could never be sure when he would next appear. Although Reinette spent a lot of her life waiting for the Doctor to return, she kept herself busy, growing up to be a sophisticated lady of the French court.

Myles exemplified grace under pressure, and showed you don’t have to have a gun or know a dozen martial arts to be a strong or interesting character.

3. Mark Sheppard
Mark Sheppard is one of those actors who always pops up unexpectedly in a TV show, and does a fabulous job with whatever role he’s been given. His role as Canton Everett Delaware III was no exception. A former FBI agent, he was recruited to help President Nixon get to the bottom of a series of a mysterious phone calls. Canton was then roped into the Doctor’s shenanigans, which he accepted calmly.

There wasn’t much that could phase Canton. Someone summons him for a mysterious mission in the middle of the night? It’s the President. He rolls with it. (After telling the President to his face he didn’t vote for him). Confronted with alien technology? Cool, but there are more important things to worry about at the moment. The TARDIS team would have failed without Canton in ‘The Impossible Astronaut’ and ‘Day of the Moon’. He was their rock. Their intimidating, unflappable rock.

2. Carey Mulligan
Before she was Daisy Buchanan, or even before she starred in An Education, Carey Mulligan was Sally Sparrow in the critically acclaimed and fan favorite episode, “Blink”. With the Doctor barely featured, except for being in a TV screen, and a brief appearance at the very end, much of the episode’s success fell to its leading lady. Sally’s inquisitiveness moved the plot forward as she investigated the mysterious goings surrounding the creepy Weeping Angels. And yet, despite snooping in an old, abandoned house, she still came across as a sympathetic, intelligent character, when she could have easily fallen into a typical horror movie damsel category.

1. Suranne Jones
In ‘The Doctor’s Wife’, the soul of Doctor’s beloved TARDIS was sucked out and planted into a human body. This left the production team with the seemingly impossible task of finding an actress to embody a box that travels throughout time and space. Enter Suranne Jones with her spot on portrayal of the TARDIS. Though up to that point it had no lines, there is no denying the TARDIS has a distinct personality that somehow, Jones managed to capture.

Her chemistry with Matt Smith was excellent- you really believed they had been travelling together for centuries. They bounced off each other like a bickering married couple who were still crazy about each other all these years later. While the TARDIS remains a constant presence on the show, Jones as the TARDIS in a human body was a onetime deal. Which is a shame, because she was absolutely perfect.