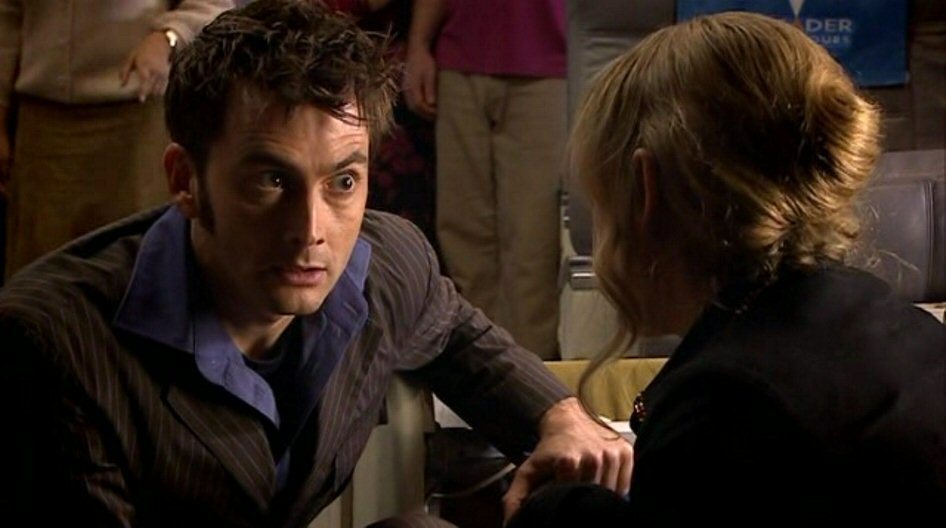 Doctor Who Turns 50: 12 best episodes of the revived series

We trust that you’ve read Part I (12 most memorable moments: HERE) and Part II (our 12 favourite guest stars: HERE) of our Doctor Who 50th Anniversary Celebration, so here’s Part III.

Here are our picks for the top episodes since the show came back in 2005. (Storylines that were made up of multiple episodes counted as one).

Peppered with some of Shakespeare’s best known quotes, and some Harry Potter references, this episode was self-aware in the best of ways.

11. “The Girl in the Fireplace”
This bittersweet episode showed that you can tell a beautiful love story in less than an hour. The Doctor met Reinette, the titular girl in the fireplace when she was a child, and kept meeting her at different points in her life as she grew up.

The episode had gorgeous costumes, cool vintage clock monsters, and a strong guest star in Sophia Myles. It was also the first episode of the revived series to explore what it’s like to fall in love with someone who is following a different timeline, and honestly, this episode did it best.

10. “Human Nature”/”The Family of Blood”
In order to hide from hostile aliens, the Doctor does the unthinkable: he becomes human. Not only does he temporarily become human, he becomes the bumbling John Smith, whose only memories of his life as a Time Lord come to him as dreams.

It showed the audience something the Doctor could never really have: a normal life. It also showed the Doctor (or the human version of the Doctor) rejecting his role as the hero so he could have that normal life. It shook up the usual format of the Doctor saving the day. Instead, he had to be convinced to save the day. The episode’s concept was one that could be really good, or really bad, depending on the execution. It was really good, and offered a look at the cost of living a life of adventure.

9. “Blink”
By this point, I think I’ve made my feelings about “Blink” pretty clear. It’s spooky, it’s well-written, and well-acted. Watch it. It’s fun.

8. “The Waters of Mars”
Arriving alone on Mars, the Doctor realizes he stumbled upon a fixed time- what happens there must always happen. Even though it means the death of the entire group of explorers living on the planet. The Doctor, tired of losing people, decides to take matters into his own hands, and rewrite time, not caring about the consequences. In a moment of arrogance and desperation, he declares himself ‘Time Lord Victorious’ and says that as the last Time Lord, that time will obey him, and not vice versa. It showed how terrible the Doctor is capable of being. He realizes the error of his ways, only after his actions compel a woman to kill herself.

What’s great is the hero of the story is held accountable for his actions. The later seasons are especially guilty of letting the Doctor commit atrocities and writing it off as “He’s the Doctor- he’s the good guy. It’s fine!”. “The Waters of Mars” doesn’t give him a free pass: there are internal and external consequences. The Doctor feels remorse, but his actions also marked the beginning of the end for the Tenth Doctor.

(Plus, “The Waters of Mars” was scary and has the lingering effect of making Doctor Who fans wary whenever NASA has announcements of an aquatic nature from the red planet.)

7. “The Empty Child”/”The Doctor Dances”
Who knew gas masks could be so creepy? (Well, other than Steven Moffat, since he’s the one that wrote the episode). Although it’s set in London during WWII, “The Empty Child/The Doctor Dances” don’t focus on the war itself. Sure, the war is affects the storyline- it’s hard not to when bombs are being dropped out of the sky. But the episodes focus instead on a mysterious child with a gasmask attached to his face. The titular empty child doesn’t do much, except try to track down his mother, and turn other people ‘empty’ too.

This episode also served as an introduction to Captain Jack Harkness, one of the show’s best recurring characters, who had instant chemistry with both Rose and the Doctor.

6. “The Pandorica Opens”/”The Big Bang”
Season 5 is probably my favorite overall season of NuWho. It layered the season’s mystery very well, and was funny, romantic, and epic without trying to be epic. (Sadly, seasons 6 and 7 were not able to capture the same effortless epicness and got weighed down by trying way too hard). But Season 5. Wonderful, wonderful season 5. All the elements that were carefully laid out for the first eleven episodes came together beautifully in the two-part finale.

The episodes resolved a majority of the questions that the season created, and set up new ones, which is what a good season finale should do. (The fact that later seasons neglected to answer those questions isn’t their fault). The episode hit the ground running, and never really stopped. It was funny, suspenseful, and emotional. Sometimes, when later seasons get frustrating, it’s nice to come back to the Pandorica Opens and the Big Bang as a reminder of how good Doctor Who is capable of being.

5. “Utopia”/”The Sound of Drums”/”The Last of the Time Lords”
Steven Moffat is more overt in dropping hints of what to come than his predecessor, former showrunner Russell T. Davies. So sometimes it’s easy to forget what a good job Davies did at weaving in foreshadowing. Case in point: the mysterious Mr. Saxon who was mentioned throughout the season. He turned out to be an alias for the Doctor’s old enemy, the Master.

So not only did Davies bring back a Classic Who villain, but he alluded to him for an entire season without anyone realizing. The episode’s greatness didn’t just rely on the plot twists and turns (though there were plenty). There was a lot of emotional punch, as the Doctor and the Master confronted each other. David Tennant and John Simm were well matched as equally determined and brilliant opponents. And the Master isn’t just another run of the mill villain; he and the Doctor’s shared history meant that underneath the open animosity, they had gone through too much together to be just enemies. They need each other, though they might be reluctant to admit it.

Another bonus of the three part finale: while the Doctor and the Master were busy with their back and forth I’m-going-to-kill-you-but-not-really-because-you’re-too-important-to-me, the Doctor’s companions were busy kicking ass. Looking at you especially, Martha Jones.

4. “Silence in the Library”/”The Forest of the Dead”
The Vashta Nerada for me rank as the second scariest Who monster (see below for the first).

They’re shadows. That eat people. (This might have brought back my childhood achluophobia for a few days. Or weeks). While the Doctor is trapped in the library, avoiding any and all shadows, Donna is eventually trapped in a computer simulation, struggling to remember reality. It’s hard to say who got the worse deal: running from carnivorous shadows, or being put in a simulated world, and finding out everything you thought was real was only a dream.

As if that wasn’t enough to contend with, the Doctor meets River Song (who goes on to be a big part of seasons 5 and 6) for the first time. It was clear from the start that she already knew the Doctor, but at this point, the Doctor didn’t know her. David Tennant and Alex Kingston played off each other well, and it’s a shame Tennant left before he and Kingston could have done another episode together.

3. “Midnight”
This is probably one of the creepiest, most intense episodes of Doctor Who. The Doctor is stranded in a shuttle with six fellow passengers, and a hostess, when they are attacked by an unknown creature. Somehow, the creature makes its way onto the ship and takes over the body of one of the passengers. It starts by repeating what the other people on board are saying, but changes its tactic, and stirs up paranoia in the passengers.

Several factors make “Midnight” so disturbing. First, it was filmed almost entirely in the shuttle, making it feel incredibly claustrophobic. Two, the monster was never revealed. Did it have a physical form? What did it want? And what happened to it? These are never answered. The third, and perhaps most unsettling factor was how quickly the passengers turned on each other. They got along just fine until the shuttle broke down. Then fear and suspicion created a mob mentality which ended with them nearly committing murder. Yes, the unknown alien was the major monster this episode. But human nature was a close second.

2. “Turn Left”
This episode should be subtitled, “Why Donna Noble is the greatest”. Set in an alternate universe where Donna never met the Doctor, “Turn Left” shows that yes, Donna and the Doctor make an amazing team, but Donna is pretty awesome on her own. Donna’s biggest problem was always her self-doubt and lack of confidence. Over the course of the season, through her adventures with the Doctor, she slowly started to believe in herself. In “Turn Left”, she didn’t have the benefits of those experiences, but she still fought to help with everything she had, even if she didn’t think what she had was much. Not only did this episode show thoughtful character insight, but if offered an interesting alternate timeline. Donna never met the Doctor, he died, and a dystopian universe was created.

One decision -turning left instead of turning right- caused a new chain of events was close enough to the season’s established timeline to make it shocking how quickly everything went wrong. While it would have worked fine as a stand-alone episode, “Turn Left” ended up serving as an excellent transition into the season finale.

1. “The Doctor’s Wife”
You’ve already heard me wax lyrical about the guest stars and moments of this episode. Here’s Rachael’s take on it:

When “The Doctor’s Wife” first came up in the episode lineup, I (and many others) thought it was going to be another iteration in the River Song saga. Whatever your feelings on that particular story line (mine are complex!), it seems like a waste of guest writer Neil Gaiman’s CONSIDERABLE talents.

Instead, the titular wife was a total fake out. It was the Doctor’s one true love, his constant companion, his TARDIS made briefly, memorably, insanely flesh. We already covered the awesome guest turn by Surrane Jones, but let it just be said again: there is no reason this character should have worked, and Jones knocked it out of the park.

But the real genius comes straight from the Neil Gaiman playbook – the mixture of the funny and the darkly observant, the deeply rich character beats, and that achingly sincere look at love and friendship. It all comes together for an episode that feels like a perfect little one hour movie, not indebted to the Doctor’s latest shenanigans or sonic screwdriver magic. It functions at once to show us the best of what Doctor Who can be (human, alien, and moving) and as a perfect intro to the particular mixture of grandiose mythology and grounded character beats that is Doctor Who. In short: it’s a near perfect episode that I watch every chance I get.