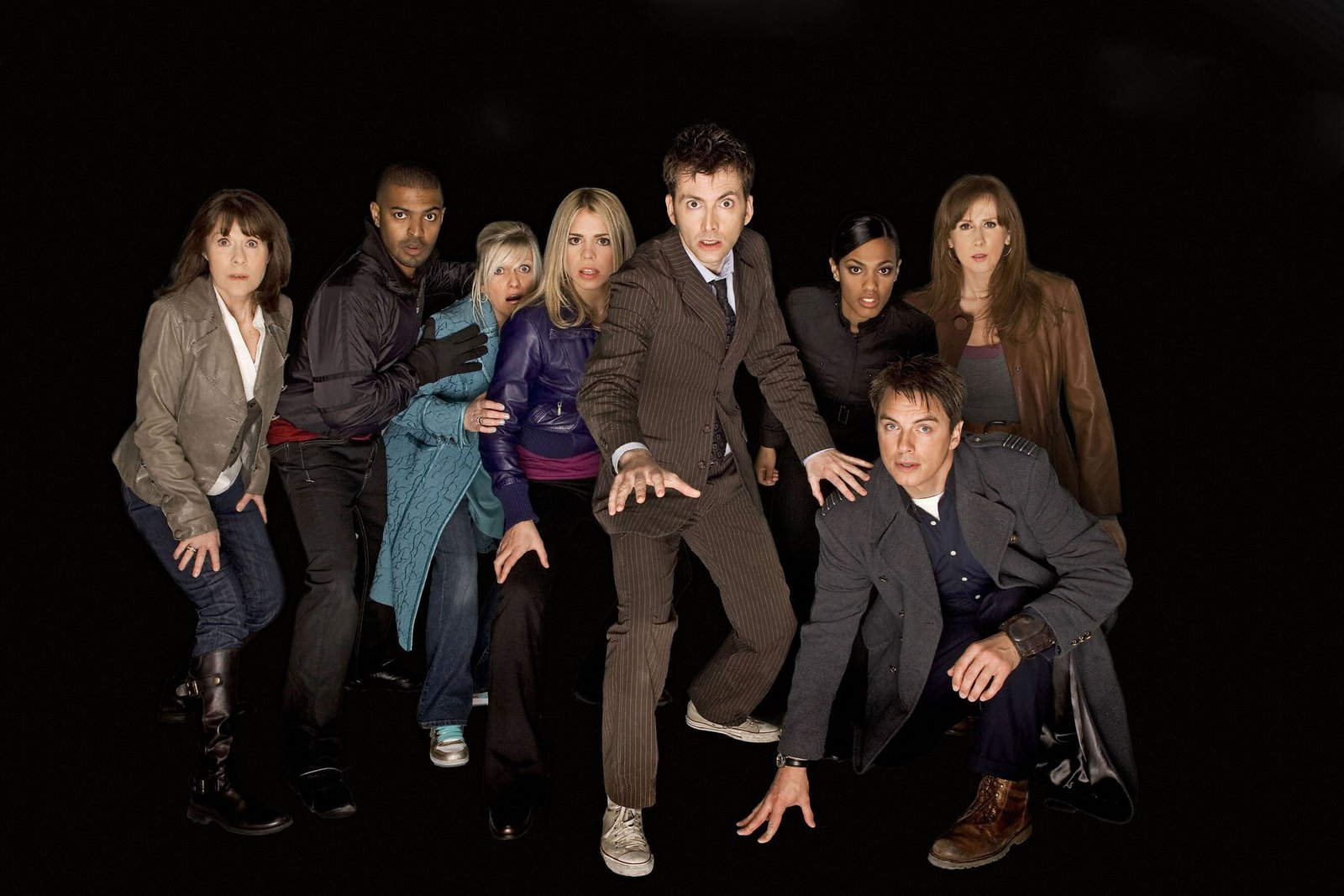 Doctor Who Turns 50: 12 most memorable moments

As the first part of our Doctor Who 50th Anniversary celebration, and in honor of the 12 (or soon to be 12) incarnations of the Doctor, we’re taking a look back at 12 of the most memorable moments the show has had since its 2005 revival.

12. Weeping Angels do their thing
“Blink” is consistently ranked a fan favorite episode. It’s creepy and atmospheric. Throughout the episode, everyone is warned against the Weeping Angels, and instructed not to so much as blink. The Weeping Angels look like statues, and are incapable of moving as long as someone is looking at them. The second you turn away or blink, they can move unbelievably fast. It’s one thing to hear these warnings; it’s another thing to see the Weeping Angels them in action.

While the Weeping Angels lost some of their scare factor as they were featured more in subsequent episodes, the first time audiences saw them move remains terrifying, and had Whovians everywhere eyeing statues suspiciously. You know, just as a precaution.

11. Donna’s Departure
The more Donna saw of the universe, the more she grew as a person, becoming more confident and compassionate. She also became the Doctor’s best friend. It seemed like they would travel in the TARDIS together forever. Then Donna absorbed some of the Doctor’s DNA in a “meta-crisis”. While this let Donna save the day, it also was too much for her body to handle. In order to save her, the Doctor was forced to erase her memories, leaving no trace of their adventures together as seen in the beginning of this clip.

It was one of the harshest fates given to a modern companion. Not only was Donna separated from her best friend, but she was forced to return to her ordinary life, never knowing all the amazing adventures she had, or all the people she saved. Worst of all, she went back to being the shallow self-involved woman she was when she first appeared, and never discovered what she was capable of doing.

10. Nine regenerates
Christopher Eccleston gave an amazing, but sadly short-lived performance as the ninth incarnation of the Doctor, lasting only for one season. His regeneration was the first since the show’s revival, and managed to explain the process to those unfamiliar with it, without sounding like he was delivering exposition.

It was a subtle, but still emotional performance: Eccleston’s Doctor at his best. And you know what? He was pretty fantastic.

9. The TARDIS takes human form
The TARDIS is probably one of the most iconic images associated with the show. It’s how the Doctor travels around. It’s an important part of the show, and arguably has a lot of character, considering it’s a blue box (that’s bigger on the inside).

Until one episode when this:

and could suddenly walk and talk.

The moment when the TARDIS’s essence was sucked out of the box and into a human body was brilliant. Because on one hand what? But on the other hand, it was genius, and why had no one thought of it before?

8. The Master Revealed
Since the 2005 revival, it had been established that the Doctor was the last Time Lord, the rest having died in the Time War. Being the last of his kind was a burden on the Doctor, who had to carry the weight of that with him always

Except he wasn’t the last Time Lord. Out on the edge of the universe and time, the Doctor encountered a benevolent professor, Yana. Yana wasn’t all that he seems. He was in fact, the Master, the Doctor’s Time Lord nemesis. The Master was in hiding to avoid the Time War (which since everyone else died, was actually kind of a good decision). Of course, Derek Jacobi’s Master was soon shot and died anyway. But he quickly regenerated into John Simm.

Bringing back the Doctor’s old enemy back, especially since they are now the last two of their kind was unexpected, and created a whole new dynamic to explore between the two Time Lords. And having two phenomenal British actors portray them over the course of a few episodes was just an added bonus.

7. Rose’s Departure
Since Rose Tyler was the first companion of revived series, her departure was bound to have an impact on the audience. The Doctor opened a void to trap an army of Cybermen and Daleks in. Rose was almost sucked in herself, but was saved last minute by her dad, and whisked away to the safety of a parallel universe. But once the void was shut, Rose was trapped, with no way of getting back to the Doctor.

While they would be briefly reunited (see later on in the list), the Doctor (and fans) would mourn Rose’s loss for much of the next season.

6. Donna’s First Appearance
The Doctor had to put his mourning on hold for a little bit, because he accidently kidnapped Donna Noble, who frankly did not care about any emotion turmoil he was experiencing. She just wanted to get back to her wedding.

While the above clip was taken from the Christmas special, Catherine Tate filmed a short cameo that appeared at the end of the season 2 finale, going through great lengths to keep her role a secret. It worked, and audiences around the country were surprised to see the comedienne guest staring on Doctor Who.

6a Donna’s Second Appearance
The Doctor runs into a lot of people during his travels. He goes all throughout time and space. Which is why it’s unusual for him to run into the same person twice, unless he was purposefully seeking them out. In this case, Donna was looking for him, regretting her decision to not travel with him. When she finally found him, she was not letting him go again, giving Catherine Tate and David Tennant another opportunity to show off their amazing on-screen chemistry.

5. Sarah Jane returns
Sarah Jane Smith (Elizabeth Sladen) is one of the most popular Classic Who companions. Actually, she might be one of the most popular companions of all time. So when she came back in season 2, it seemed only natural.  She was a welcome guest star to fans of the older series. But Sarah Jane’s reappearance wasn’t just to link the revived series to its past, nor did  Sladen rest on her character’s popularity. Instead, she proved she was just as able a companion as she was in the 1970’s and won over a legion of new fans in the process. She would go on to guest star in several more episodes during David Tennant’s tenure, and even got a spin off series.

4. Rory isn’t dead (the first time)
Rory Williams has developed a reputation for dying, only to come back to life. But that wasn’t always the case. The first time he died (we aren’t counting the time he died in the dream episode, because that was, you know, a dream), Rory didn’t just die, he was erased from time. Only the Doctor remembered Rory even existed. But then, seemingly out of nowhere, Rory was back.

Rory’s many, many deaths over the seasons might have become something of a running joke. Some fans might have speculated Rory wasn’t really dead before the season 5 finale. But his original return was done in a way that still surprised most viewers. (Come on- no one thought he was coming back as a Roman soldier. A Roman soldier who was actually a plastic decoy who thought he was human).

4a. Rory isn’t dead (the second time)
Rory’s second “revival” happened in the second part of the season 5 finale. Amy, Rory’s fiancée was asleep in a box for nearly two thousand years (it’s a long, complicated story), and Rory vowed to guard her until she could wake up. When Amy got out, she thought Rory was dead. And while probably no one except the characters actually thought he died again for real, Amy and Rory’s reunion was sweet, and evidently started a new habit for Rory of flirting with death/near death experiences.

3. “Run!”
This is the Doctor’s very first scene of the revived series.

There isn’t much to say about this moment except: way to make an entrance.

2. Jack is the Face of Boe
The Face of Boe was a mysterious that the Doctor and viewers encountered several times throughout the first three seasons. He was ancient, compassionate, and dignified. Or as dignified as you can be when you’re a billion + year old giant head in a jar. Captain Jack Harkness was another recurring character-dashing, handsome, and a huge flirt. Oh yeah, and immortal.

The two character never met, and didn’t seem to have much in common. Until Jack mentioned in “The Last of the Time Lords” that he was from the Boeshane Peninsula, and it became clear that Jack in a few billion years, Jack was destined to be a giant floating head. While Jack didn’t realize the significance of this information, the Doctor, Martha, and fans of the show left in shock after this revelation.

Russell T. Davies showed that he wasn’t just capable of executing subtle season long mysteries, but he was also capable of dropping huge bombshells. There was no reason to suspect the Face of Boe was a character the audience had already met, nor any hints of what Jack would eventually evolve into. But it made complete sense, and added an extra dimension to Jack’s character. And the best part: no one saw it coming.

1.  All the modern companions in the TARDIS
“The Stolen Earth”/”The Journey’s End” weren’t the strongest episodes plot wise. But, it did feature all the modern companions, and Sarah Jane, and supporting cast members from Doctor Who spin-off shows, who all came together to stop the end of the universe. For most of the episodes, everyone was separated, enacting their own plans to save the universe. But at the end, they all came together to fly the TARDIS home, bringing out many a Whovian’s sentimental side.

Of course, a few scenes later, everyone goes their separate ways, and the Doctor is alone again. But that just makes those few minutes even more precious. For a moment, the Doctor could look around and see his most recent companions all in one place. And for a moment, they were all happy.

Honorable Mention: Here Come the Drums
This scene doesn’t have the sentimental value, or narrative importance as a lot of the other moments listed. But it perfectly demonstrates the Master’s outlook on life: ending the world should be fun, not a chore.

It is important to stop and appreciate villains who understand the necessity of a good soundtrack.