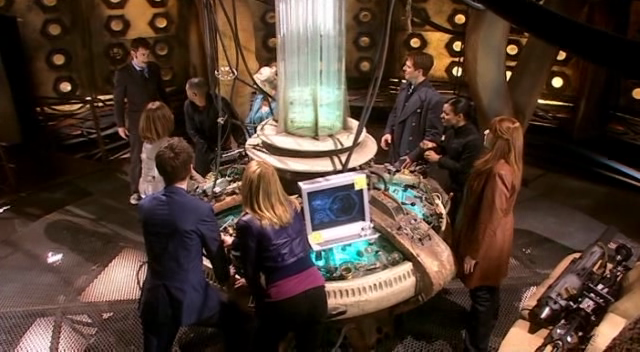 The countdown to the Doctor Who 50th Anniversary Special continues. As the day finally arrives, we have two final lists for you. Read on for our 6 favourite companions of the modern era.

Read the Rest of Our Special Coverage:
Part I (12 most memorable moments: HERE),
Part II (our 12 favourite guest stars) HERE
and
Part III (12 best episodes of the revived series) HERE.

6. Mickey Smith
Mickey is a character that people either seem to love or hate. I never really understood the hate against him. Mickey was Rose’s boyfriend at the beginning of the series. He was a normal guy, living a normal life until a Time Lord swooped in and took his girlfriend on adventures throughout time and space. Despite having a lot of reasons to hate the Doctor and Rose (during the first year Rose was running around with another man, Mickey was being investigated for her “disappearance”), he put his hurt feelings and bruised ego aside to help them time and time again.

Mickey eventually travelled with Rose and the Doctor, but was sort of a third wheel in his own relationship. Eventually, he took charge of his own destiny, and elected to stay in a parallel universe so he could look after his grandmother, who died in our universe, but was still alive in the parallel one. In the process, Mickey learned how to stand up for himself. It took him a while, but Mickey eventually became the man he wanted to be and could be proud of being. When he eventually returned to our universe (after helping stop an apocalypse), he met and married another underappreciated companion….

5. Martha Jones
Rachael and I will have to agree to disagree over Martha Jones (see below). When most people say they don’t like Martha it’s usually because she fell in love with the Doctor. This seems an unfair reason to dislike her.

One, I think a lot of people would fall in love with a gorgeous, brilliant Time Lord who whisked them away on adventures. And two, Martha recognized living with her unrequited crush wasn’t the best situation to be in, so she chose to leave.

You go, Martha. Way to have self-respect.

Martha is one of the Doctor’s more grounded companions. She’s practical, intelligent, and kind. She’s less outspoken than some of the others, but her gentleness was exactly what the Doctor needed after losing Rose.

She is more than her feelings for the Doctor. Season 3 should have been subtitled “Martha Jones saves the day while the Doctor mopes over Rose”. In ‘Blink’ when the Doctor and Martha were stranded in the past, she got a job to support them because while the Doctor is good at saving the world, he’s not so great at the day-to-day stuff. Martha was also forced to work undercover as a maid when the Doctor temporarily lost his memory and became human. She had to deal with condescending racists for months and she never complained. (Side note- Doctor, out of everywhere you guys could have hidden, really? You chose England in 1913? Really?) Then Martha went on to save the human-race after travelling a post-apocalyptic Earth. For a year. By herself.

Even after leaving the TARDIS, Martha remained on good terms with the Doctor, having several more adventures with him. She then married Mickey Smith and they became freelance ass-kickers.

4. Rose Tyler
The first companion of the new series, Rose Tyler quickly gained a devoted following for her feisty attitude and romance with the Doctor. While her relationship to the Doctor is important, it isn’t because of the romance aspect of it; Rose brought out the Doctor’s humanity. When Rose initially met the Doctor, he had just emerged as the lone survivor the Time War, his entire species having died. He was anger, bitter and harsh. Rose helped him heal. And in the process, she became more confident in herself, and found a sense of purpose.

The success of the 2005 revival had a lot to do with Rose and her reliability. She wasn’t the best in school, she didn’t have a glamorous job. But she fought her hardest to do what was right, and embraced life in TARDIS with a sense of joy and curiosity. The Doctor showed her a better way to live, and she returned the favor.

3. Captain Jack Harkness
When he was first introduced, Jack was a charming cad. His carelessness and flippancy nearly caused a catastrophe in ‘The Doctor Dances/The Empty Child’, but he was prepared to sacrifice himself to put it right. He didn’t die (yet), and instead travelled with Rose and the Doctor. Jack went from self-involved coward to self-sacrificing hero. He was killed in a last stand against the Daleks, before being brought back to life- permanently.

While immortality inevitably forced Jack to go through many traumatic experiences (a concept explored even more in Torchwood, the Doctor Who spinoff Jack stars in), he retained his core Jackness.

Jack is sometimes pigeonholed as flirt who provides comedic relief, but that does the character a disservice. Beneath the flirtatious exterior is an adventurous man who is loyal, brave, and truly cares about helping make the universe a better place. His eventual fate is a little unusual; no one would have guessed the roguish time traveler from season 1 would evolve into the wise Face of Boe. Jack so far has not appeared in any episodes with the 11th Doctor, but if he does, it’s safe to assume he would have a few more surprises up his sleeve.

2. Rory Williams/Pond
When Rory was introduced, he seemed set up to be Amy’s goofy boyfriend. He was taken for granted by Amy (who ran away with the Doctor the night before her wedding to Rory), and not taken seriously by the Doctor. Rory struggled throughout his tenure with insecurity and awkwardness, but he was also highly intelligent, and always rose to the occasion when needed.

That short clip showed two things that made Rory an important companion: he cares about other people, and he’s not afraid to stand up to the Doctor. Amy is Rory’s number one priority. He would do anything for her, and always put her before himself (sometimes to a fault). But that doesn’t mean Amy was the only person Rory cares about. Oftentimes the Doctor and Amy would be absorbed with the big picture, while Rory took the time to notice individuals and their problems. He was the one aboard the TARDIS most in touch with his humanity. The Doctor could get wrapped up in trying to save the day, but Rory’s interactions served as a reminder the Doctor wasn’t solving a series of problems, but helping people. Rory would tell the Doctor when he was being inappropriate or was wrong. Amy, especially in her earlier days, put the Doctor on a pedestal. Rory sometimes was the only one who held the Doctor accountable for his actions, which quite frankly, the Doctor needed. Despite this, Rory considered the Doctor a friend and was loyal to him. His principle purpose in travelling with the Doctor wasn’t to go on wild adventures, but to share experiences with the people he cared about.

Rory, his sarcasm and his role as bumbling badass are greatly missed.

And finally, here is Rachael’s take on our top modern Doctor Who companion.

1. Donna Noble
I fell hard for Doctor Who when I first started watching it. And when David Tennant came on – all neurotic and angry and twitch and strangely attractive – I fell even harder. And because he loved Rose, because he thought that strange accent and horrible eyebrows were apart of an attractive whole, I loved Rose. And then she left, and Martha came on board and… meh. It wasn’t that Martha was bad, it was that she was Rose light. With the exception of a few episodes that relied on her medical skills or made interesting observations about what it would be like to be a black woman traveling through time, Martha was just another cute 20-something crushing on the ageless wonder. And it got boring, watching her hit the same emotional notes Rose had been suffering in for two seasons, but now without David Tennant and Billie Piper’s chemistry.

And so it was with trepidation that I entered the era of Donna, even though in her first appearance she put up with exactly 0% of David Tennant’s lost-boy-with-a-time-machine shit. Donna Noble was a breath of fresh air and an incredibly necessary relief from the doe-eyed waifs who were becoming the doctor’s traditional companions. Plus, as played by Catherine Tate, she was ballsy, brash, unapologetic, ridiculous and fun. Her arc, from unambitious, limited, man-crazy woman into a universe saving semi-time lord, was perfectly plotted, and probably the finest bit of character work of the Russell T. Davies era.

Before Rory and Amy had their own sort of life, Donna was the first companion who seemed to exist fully, even apart from the Doctor. Ironic, then, that her whole arc was about her discovering her own identity and value. She also, of course, had the most tragic ending, which we already covered HERE, an ending that still sits badly with me, even though I think it was a bold turn. Donna Noble was my personal favorite person for the Doctor to travel the universe with, as much for her stout heart and take no bullshit attitude, as for the fact that Catherine Tate was really, really funny.

Sarah Jane Smith
Sarah Jane is usually associated with the Classic era of Doctor Who. But really, you can’t have a countdown of best companions and exclude Sarah Jane. Sarah Jane initially travelled with the Doctor after she snuck onto the TARDIS to pursue a story (she was a journalist). Her inquisitiveness made her a natural companion.

After she was left stranded on Earth by the Doctor, Sarah Jane continued to investigate and have adventures of her own. While her intelligence and experience were important to the Doctor, her unique perspective was even more so. Even after all those years, Sarah Jane understood the Doctor. She was able to give advice no one else could, because they didn’t know him like Sarah Jane did. She knew him, flaws and all, and still respected and cared about him and would prove time and time again to be an invaluable ally.