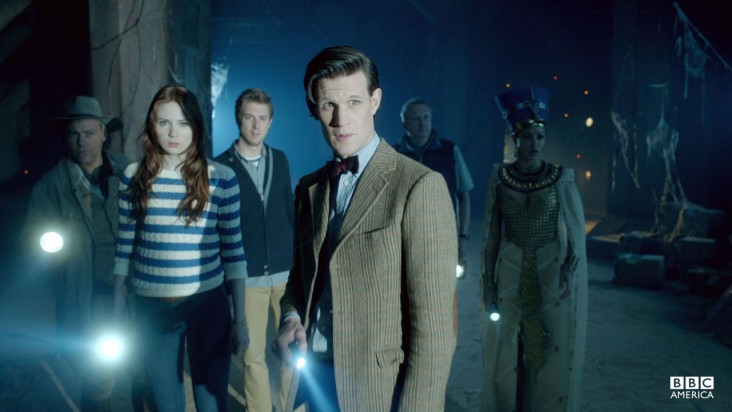 Dinosaurs on a Spaceship

When marketing this week’s Doctor Who, ‘Dinosaurs on a Spaceship’, the focus was of course, dinosaurs and a spaceship. Yes, yes, you spent a lot of your budget on those, and they were admittedly very cool. Personally, I was way more excited about this week’s guest stars. Lestrade from Sherlock had a big gun! Peep Show’s Robert Webb and David Mitchell voiced two of the most sarcastic robots ever. Filch from Harry Potter was this episode’s villain. And Mr. Weasley is apparently Rory’s dad.

Open in ancient Egypt. The Doctor is being hit on by Queen Nefertiti. He gets a message via psychic paper and departs, taking Nefertiti with him. They go to a spaceship in the future, where the crew tells the Doctor there is an incoming, unidentified spaceship. They will send missiles at the spaceship when it comes within 10,000 miles of Earth, in about 6 hours.

The Doctor gets some back up. He goes to Africa in the early 1900s to fetch big game hunter, John Riddell (Rupert Graves). The Doctor then gets Amy and Rory. He also accidentally picks up Rory’s dad, Brian (Mark Williams). The TARDIS crew lands on the mysterious spaceship and encounter…charging dinosaurs!

Credit time. They changed them…again. Apparently this is going to be a weekly thing that I’m going to have to accept.

Team TARDIS successfully evades the dinosaurs. The Doctor finds a computer system and tells it he wants to find the engines. He, Brian and Rory are teleported to a beach, where the (hydro-powered) engines are based. In addition to engines, there are also aggressive pterodactyls. The trio flees to a cave where they come face to face with robots (voiced by Robert Webb and David Mitchell) who take them prisoner.

While Riddell and Nefertiti flirt, Amy investigates what happened on the ship. She realizes the ship was built by the Silurians, intended as an ark to protect the dinosaurs from extinction. Amy looks through the records and sees that when the ship launched, there were thousands of Silurians aboard. Now, there are none. Amy and Nefertiti notice a smaller spaceship on board that was not there when the ship originally launched.

The Doctor is taken inside said smaller spaceship. There he meets Solomon (David Bradley). Solomon doesn’t want to answer any of the Doctor’s questions.  He doesn’t have to; Amy calls the Doctor and tells him the ship is Silurian. The Doctor deduces that Solomon is a trader who boarded the ship while the Silurians were under cryogenic sleep. Solomon confirms this, and says he killed the Silurians by ejecting them from the spaceship. He wants to sell the dinosaurs, which are super valuable, seeing as they’re supposed to be extinct and all. The Doctor, Rory and Brian make their escape by riding away on a triceratops. Yes. That’s a thing that happened.

The missile from Earth has been launched, and can’t be stopped. To make a bad situation worse, the Doctor can’t steer the spaceship. Solomon appears, and demands the Doctor hand over Nefertiti, who is apparently worth a lot of money. (Most ancient Egyptian queens are, you know). Nefertiti agrees to go with Solomon so he won’t kill the rest of the group. Solomon takes Nefertiti and his robots back to his ship.

The Doctor and his remaining companions go to the control deck. Riddell and Amy hold off incoming dinosaurs with stun guns, while the Doctor tries to figure how to change the ship’s course. The system requires two organisms from the same gene pool to control it. Brian points out that he and Rory have the same DNA, so they can steer the ship away.

The Doctor leaves Rory and Brian to it, while he teleports to Solomon’s ship to rescue Nefertiti. The Doctor disables the robots, then switches the two ships’ signals, making Solomon’s ship the target of the missiles. He and Nefertiti teleport back to the main ship, leaving Solomon to die.

The Doctor wants to find a safe place to drop the dinosaurs off. The Ponds decide they want to go home. The Doctor drops them off. Riddell returns to his time period, with Nefertiti accompanying him. And Brian, inspired by his adventures, travels around the world, sending post-cards to his son and daughter-in-law.

This episode was pretty much what you would expect an episode called ‘Dinosaurs on a Spaceship’ to be: a slightly ridiculous, fun adventure in an epic landscape. The guest stars were excellent in their respective roles. It was nice to see Amy take charge, especially since last week, she was semi-reduced to damsel status. And seeing Rory with his dad was priceless. Not only did they provide some truly funny father/son moments, but it provided some insight into Rory’s background.

It was a pretty solid episode, with most issues being minor ones with one exception: the Doctor left Solomon to die. Of course, rerouting the missile to blow up Solomon’s ship was necessary for the doctor to save himself, his friends, and the dinosaurs. And most people wouldn’t think twice about leaving a greedy, cold-blooded killer to die. But the Doctor isn’t most people. He always offers mercy, and tries to save everyone, even his worst enemies. Killing is a last resort, and in most cases, if someone dies because of the Doctor, it’s because they wouldn’t accept his help, not because he actively killed them.

I was expecting the Doctor to offer Solomon the chance to go back to the main ship, and face justice, etc, etc. Yes, Solomon was a monster. But what the Doctor did was really out of character. The trailer for this series hinted at a potentially darker, more jaded Doctor. I’m hoping this marks the beginning of a character arc, similar to David Tennant’s 10th Doctor, wherein the Doctor makes mistakes, does some un-Doctorish things, eventually realizes the error of his ways, and has some kind of character growth. Basically- I want consequences of some kind.

Overall, I did like this episode. The Ponds only have three episodes left, and I have a feeling this season is about to get real dark, real quick. So in the inevitable gloomy and depressing episodes to come, it’s a comfort to know we’ll always have dinosaurs in a spaceship.