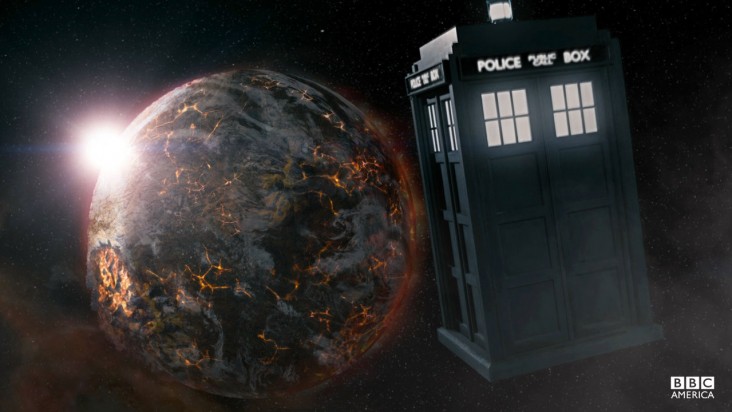 “The Name of the Doctor”

The season 7 finale of Doctor Who was much more intimate and personal than finales of the past. While it was a nice change of pace and there were strong emotional moments, at times it felt lacking in scale. It would have been a much stronger episode were it not preceded by an obscene amount of buildup.

Since Steven Moffat took the reins of Who as show runner in season 5, there has been an expanding web of plots and subplots. At the center of the web is the mantra, “Silence will fall when the question is asked”. The question is “Doctor who?” and it was going to be asked at Trenzalore. The much talked about event finally happened and it was underwhelming. It was surprising that the Great Intelligence (last seen in the Christmas special) was the one to ask the question. I had assumed some more iconic villains would be present for Trenzalore, but the Great Intelligence worked in the episode context.

The biggest issue with the episode was the lack of consequences of the Doctor’s name being asked. After the question was asked, the Great Intelligence was able to access the Doctor’s tomb then rewrite the Doctor’s history, and prevent all his past victories. We saw star systems go out, because under the new timeline the Doctor didn’t save them. The problem with this is it should have been a bigger deal. Of course, cognitively, universes being extinguished is terrible, but the emotional impact was lacking. The show has featured a lot of apocalypses- showing distant star systems going dark isn’t going to cut it, especially when it was fixed fairly quickly.

There have been baby snatchings, lives ruined, and secret organizations all to prevent the question from being asked. The universe ended and was rebooted because people insisted the question couldn’t be asked. And it was all solved when Clara followed the Great Intelligence to foil it and restore the Doctor’s timeline. This isn’t an attempt to diminish Clara’s sacrifice; however, I expected the actual event to be greater than or equal to the scale of everything previously connected to Trenzalore. Had it not been built up to so much, I would have enjoyed the episode a lot more. Because there were a lot of good parts.

Clara’s sacrifice was one of them. Clara willingly entered a scar in the fabric of time, believing it would kill her. She did it knowing it would create thousands of copies of herself who would all be doomed to die to save the Doctor, in order to counteract the Great Intelligence’s sabotage attempts. That takes courage. There were lines about how Clara was born to save the Doctor, which in a show that often has its female protagonists’ lives revolve around the Doctor is incredibly problematic. But in the end, Clara chose to create the copies of herself that were ‘born’ to save the Doctor. It was a friend making a choice to save a friend, not a woman being an instrument in someone else’s higher plan.

Something brilliant that came out of Clara’s decision was flashbacks of previous incarnations of the Doctor. Jenna Louise Coleman was green-screened into scenes of Doctors past to show how Clara had been there to save him. This being the last episode before the 50th year anniversary in November, it was a fun way to start reflecting on the show’s history a little early.

Speaking of looking back, there was also a lot of recurring characters in the episode. Jenny, Madame Vastra and Strax were back. While they brought much-needed comedic relief and then some emotional punches, they felt like distractions at some points. This episode has been built up so much, and because it’s about the Doctor’s greatest secret, it felt like he should be the absolute focus. Instead, there was a lot of these secondary characters trying to contact the Doctor and warn him about Trenzalore.

River Song was also back. Alex Kingston was fantastic as usual, in what will hopefully be her last appearance. Her farewell to the Doctor was perfect, and brought her story full circle. I hope the show has the will-power to let a popular character go for good. It was a surprise to see her again, because she, being Amy and Rory’s daughter, fit in naturally in their story. With the Ponds gone, it felt like her storyline was winding down.

But no matter how surprising it was seeing River again, it doesn’t compare to the final shock of the episode: John Hurt joining the cast as….the Doctor? Yeah, I have no idea what’s going on either. We’ll find out in the 50th anniversary. Hopefully that will live up to the hype it’s creating for itself.