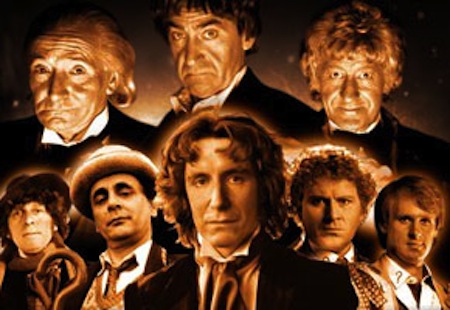 Doctor Who Turns 50: New to Classic Who

If you’ve been following our coverage leading up to the Doctor Who 50th Anniversary (which you should be; catch Parts I, II, III and IV now), you might have noticed a lack of Classic Who. This wasn’t intended as a slight against the earlier episodes; it wasn’t included because I am fairly new to Classic Who.

Approaching the older episodes can be intimidating for new fans, myself included. The original run was from the early 60’s to the late 80’s. To make matters more difficult, there isn’t a definitive place to watch all the episodes. So if you’re planning on just queuing it up on your Netflix, forget about it.

But fear not: if you’re interesting in getting started, here are some tips on diving in, so by the time 60th anniversary rolls around (assuming there is a 60th anniversary….can they cancel Doctor Who? Is that allowed?) we’ll all be masters of Classic Who….masters with a lowercase ‘m’. Not like you know…

the Master. (That’s Richard Delgado, by the way. The original Master).

Here are some tips for the nervous new Classic Whovian.

1. It is literally impossible to watch every single Classic Who episode.
If you’re like me, watching a TV show is a serious commitment. I need to watch every episode at least once. If I start a new show, I get stressed until I can finish it. Locking myself in my room and marathoning a new show until I’m caught up is a lifestyle choice I’ve made again and again. Do not do that with Classic Who. First of all, there are 26 seasons. If you lock yourself in your room and refuse to emerge until you’re caught up, there’s a chance you might never come out. At the very least, I’m sure your family would miss you.

Second: there are a bunch of lost episodes, so you can’t watch every story. Sure, some episodes thought to be lost have resurfaced but there are still some missing. Hopefully this knowledge takes the pressure of binge watching off. You can just relax and enjoy and not worry about catching up and seeing every episode because you can’t. Embrace it.

2. There are a lot of places you can watch the episodes.
This might seem obvious, but start with services you already pay for. Netflix and Hulu Plus both have episodes up for their subscribers (they seem to have the same episodes available). This helps narrow down your options a lot. Don’t have Netflix or Hulu? YouTube, Amazon and iTunes have episodes to rent. Amazon also has DVDs to buy (sadly not to stream), but buying the DVDs is of course going to cost a lot more than just renting the video for a day or two. Once you’ve found a good place to watch the episodes, all you have to do is decide what to watch. If you get really into Classic Who and want to watch as many episodes as you can get your hands on, you will probably have to use multiple services.

3. Time isn’t linear, so why does your viewing experience have to be?
The aforementioned services don’t all have “An Unearthly Child” aka the first episode ever. You could watch the available episodes in order. But as Doctor Who itself has established, time isn’t a linear progression of events. It’s a ball of wibbly wobbly, timey wimey…stuff. Remember how we established you’re not going to watch all the episodes? You could feasibly watch all the available episodes, and watch them in order but it’ll probably still take a while. So instead, I recommend:

4. Start with what you know
Start with what you know and branch out from there. There are a lot of elements from Classic Who in the revived series. There are iconic enemies such as the Daleks, Cybermen and the Master who all come from the original series. If one of them is a particular favorite of yours, why not find the episodes they feature in and trace their evolution through the series? If you focus on an element you know interests you, it can take you through the different seasons, so you’re exposed to more Doctors and more companions. It gives you a wider sampling of the series, so if there is a particular era or other aspect you discover appeals to you more than the others, you can watch it.

Sarah Jane Smith or K-9 are former companions who also make a good bridge to the classic episodes, since they made appearances in the 2005 series. Finding a good classic companion that you like is another potential way to start.

Not sure what companions to watch? Here are some recommendations, based on what I’ve seen of the classic episodes so far:

Barbara Wright was one of the first companions, and is a pretty cool lady. In ‘The Aztecs’, she was mistaken as the reincarnation as a goddess and she just kind of went with it, while trying to enact social reform. (I just watched my first Barbara episode a week ago so I’m still excited over her).

Other classic companions I’ve seen and liked so far:
Jamie McCrimmon because who doesn’t like a companion who goes on adventures wearing a kilt?

Harry Sullivan and Jo Grant are a few more I recommend checking out.

There really is no right or wrong way to watch the Classic episodes. If you watch the 50th anniversary and decide you loved it so much you want to watch more episodes immediately (or maybe you hated it and want to watch episodes from the good old days…I don’t know. This is being written before the 50th has aired), Classic Doctor Who is definitely worth checking out. It spans so many seasons and visits pretty much every setting imaginable. It has many companions and eight doctors (if you count the movie as part of the classic series). There’s bound to be at least one episode or character that everyone can like.

If you want to share you Classic Who experiences, or have tips for those just starting it, sound off below.