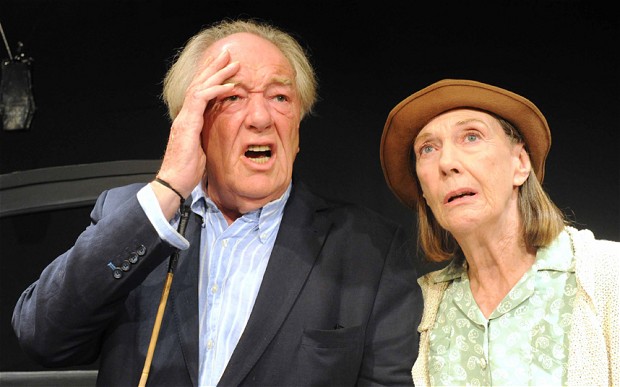 All That Fall, Fall Asleep

The secret to successful entertainment in any form is conceptually simple: know your audience. I suspect that the producers of Samuel Beckett’s All That Fall at 59E59 Theatre had an audience in mind when they chose to produce the show. I am also confident that I am not that audience. In a single word, I found All That Fall boring. In multiple words, I found it so boring that I had to will myself to stay alert and was constantly searching for something, anything, to care about in the plot.

All That Fall was written as a radio play for the BBC in 1956, and I cannot help but think that I would have enjoyed it more had I heard it on the radio. In the spirit of its origins, director Trevor Nunn has set this production on a radio sound stage, with the actors presumably performing the show for a radio audience. This concept is all well and good, except that the actors cannot seem to figure out if they should portray their characters on stage for the live audience or act as if they are performing for a radio audience. The result is a seemingly halfhearted and awkward attempt to perform for the live audience.

However, the confused staging is not why I found this production boring. The plot just did not resonate with me. Beckett’s play is about an elderly woman (Mrs. Rooney portrayed by Eileen Atkins), her journey to the train station to meet her husband (Mr. Rooney portrayed by Michael Gambon*), and their subsequent walk home. Mrs. Rooney is a rather disagreeable old woman. She grumbles and grouses about her health, her journey to the train station, the signs of technological advancement around her, and even the offers that are extended to her by kindly men who stop to say hello. Her husband is not much better. He is fond of suggesting that his death is imminent and does not think twice about shaking his walking stick at children (or asking if his wife has ever thought about killing a child). It’s all very depressing, and I found it impossible to care about, or identify with, the couple and their laments. They seem to have given up any hope of living an interesting or worthwhile life in their twilight years. I take it back. I do care about the Rooneys – I care that I never end up like either of them.

Despite a few laughs and an odd plot twist at the end of the play involving Mr. Rooney’s delayed train, there is very little engaging content in Beckett’s play.  At least, I was not engaged by it. In the last month, I have had at least five people comment on my “youth” as I waited for a performance to begin. To appreciate this fact, you have to understand that the average age of patrons attending a straight play in New York is probably around 55 years old. In this sea of wisdom and maturity, I tend to stick out.  That being said, some my fellow theatregoers may have found Beckett’s words far more poignant and thought provoking than I did.

The theatre itself did little to liven up the production. 59E59 Theatre A is one of the dullest and most uninspiring theatre spaces that I have set foot in. The décor is gray, the walls are gray, and the seats are gray. Did I mention gray? Theatres should have character and a discernable identity – 59E59 is devoid of both. Moreover, because the play is set in a radio studio, the set design is simple (chairs and microphones) and there are very few props used in the show. These facts would not matter had I been listening to the show on the radio, but they matter a great deal in a live performance – especially in a space that I would eloquently describe as “blah.”

The acting was generally fine. At times it was a bit over the top and did not quite match-up with the “radio style” sound effects, but everyone gave solid performances considering the confused staging. Notably, Atkins and Gambon have chemistry that makes their relationship believable, and Atkins has some wonderful comedic moments in an otherwise bleak play. I wish I could say more about the performances, but the actors’ talents were wasted in this production. My favorite moment in the play came after the last scene faded to black and Gambon had some pep in his step as he jogged off stage for the curtain call. That made me smile.

Unfortunately, a few entertaining moments could not save an otherwise tiresome plot. In the future, the producers of All That Fall should do some serious soul-searching before reviving a play that was written to be heard and not seen.

All That Fall runs until December 8 at the 59E59 Theatres.

* Probably most recognizable to those of us under 30 for his work in the heart-wrenching and inspiring movie Amazing Grace. No. Wait. Maybe, that statement only applies to me. I have consulted my program – apparently he was also Albus Dumbledore in the Harry Potter movies.