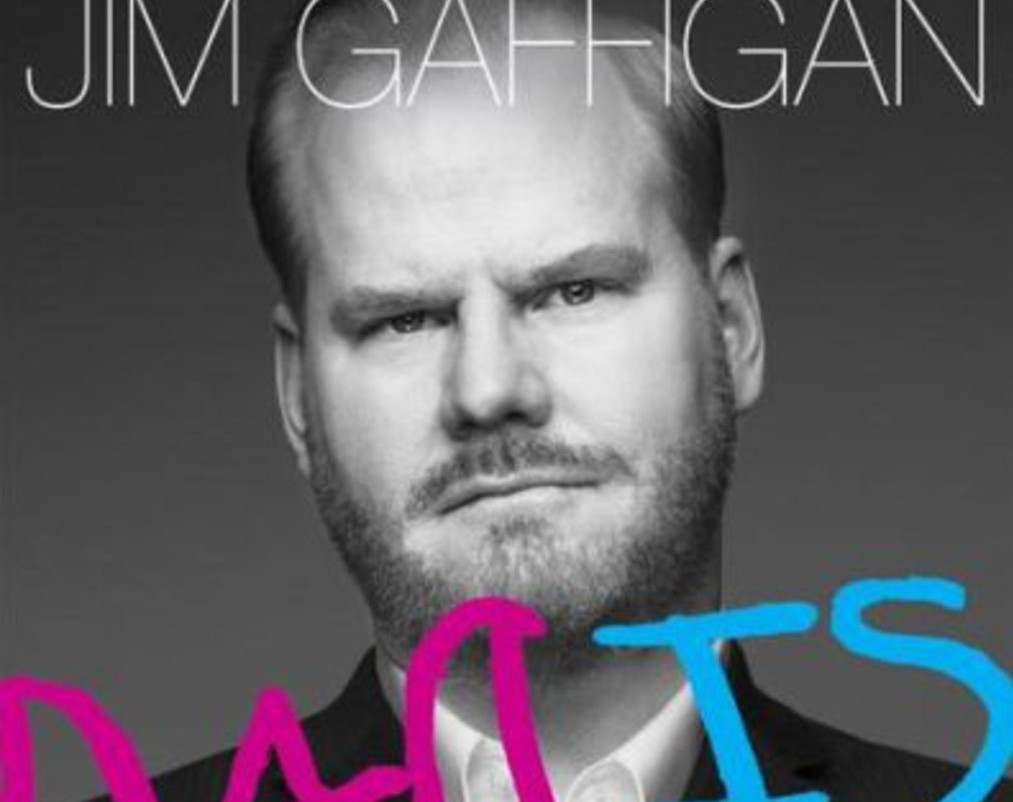 Comedian Jim Gaffigan has been at the top of my comic list for many years now. You may recognize him as the pedestrian from the “meow” scene in Super Troopers, as Roy Keene from That 70s Show, from the “Pale Force” skits with Conan O’Brien, as Andy Franklin on My Boys, or from countless appearances on shows like Portlandia, Bored to Death, and Bob’s Burgers. Becoming popular for his hour routines, his most recent comedy albums include Beyond the Pale (2006), King Baby (2009), and Mr. Universe (2012). This year, Gaffigan published his first book:  Dad is Fat.

The hand-drawn picture on the back of the second page says it all. Labeled from left to right, the family consists of little Jack, newborn Pat in Mom’s arms, Marre between the parents, along with Katie and Michael on the right. Standard artwork for any fridge, the sketch shows big smiles and cartoon eyes. The most dramatic portion of the picture is the body type, drawn from the preference of one of the children. While the entire family is thin, almost stick-like, the dad (Gaffigan himself) was drawn with a giant circle for the torso. His son’s first sentence even provided the book’s title.

In his routine, Gaffigan admits to being lazy, tired and hungry, most of the time—casting himself as the typical American that we all try not to be. Like a clean version of Louis CK, the comedian isn’t afraid to admit giving into his temptations. In Gaffigan’s case, nearly every temptation revolves around food and napping. Perhaps his most notable bits discuss McDonalds, Hot Pockets, cake and bacon. From the King Baby album, he remarks, “You want to know how good bacon is? To improve other food, they wrap it in bacon. If it weren’t for bacon, we wouldn’t even know what a water chestnut is…”

Known for various voices on stage, as if he’s providing a judgmental tone for the audience to laugh at his expense, the book is equally dark as it provides parental humor, discussing a wide range of topics about a family of seven that live in a two-bedroom apartment in New York. According to his website, “It’s all about the joys and horrors of my life with my five young children. I’m not sure if it’s a memoir, a confession, an apology or cry for help but Jeannie [his wife] and friends have told me it’s really funny.”

Essentially, the book is a collection of brutally honest short essays. Beginning with a letter to his children: “If you are reading this, I am probably dead. I would assume this because I can honestly foresee no other situation where you’d be interested in anything I’ve done. … I’m kidding, of course. Kind of. I love you with all of my heart, but you are probably the reason I’m dead.” Unlike some other comedians, Gaffigan chose not to simply cash in on his act, though there are four or five short bits riddled within for true fans. Around those hidden gems, there are plenty of quality lines, reader interactions and unique observations on culture: “I have five children, and I don’t even own a farm.”

At a book signing in Los Angeles, Gaffigan admits that it took him two years to come up with a topic for a first book. While children were crawling all over him in hotel pools or while he was dressed like Darth Vader for Halloween trick-or-treating, the topic presented itself. Keeping his act open—jokes for everyone—he took all of the extra insight on raising a family and created this book. While the ideal reader would be a first-time-father, the comic insight provides something for everyone, reminding readers of their own childhood or warning parents that family life is relentlessly surprising, despite any thoughts of preemptive measures.

Check for book signings, pre-order or read an excerpt at JimGaffigan.com