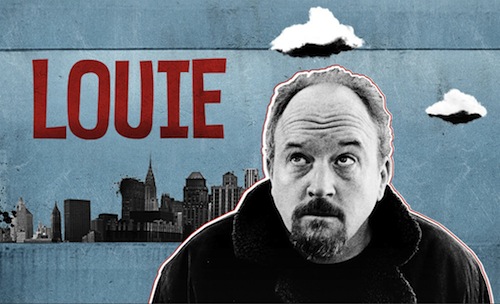 Louie: For Mature Audiences Only

Louie is not suitable for everyone. If you are pregnant or may become pregnant, have a chronic respiratory disorder, have children, are divorced, or are easily disturbed by vulgarity, consult with your physician before exposing yourself to episodes of Louie. The show has just returned to FX for its third season, so now is the ideal time to figure out whether this brand of dark humor is right for you.

Louie is the aptly-titled brainchild of Louis C.K. (C.K. being the phonetic pronunciation of Louis’ Hungarian surname, Szekely), which chronicles his life as a divorced stand-up comedian in New York City, struggling to raise his two daughters. On occasion, Louie focuses on the usual sitcom fodder – casual sexual encounters and financial trouble. But much more often, the show boldly confronts unusually controversial issues, including homophobia, lesbian mothers, abusive Catholic upbringings, racist relatives, and how to take care of a baby duckling in Iraq. On average, Louie proves to be more original than not.

Louie intersperses Louis C.K.’s stand-up acts with situational humor reminiscent of (but perhaps more discomforting than) Curb Your Enthusiasm or the British version of The Office. Many of the story lines for the show are pulled directly from Louis’ comedic material, and with 26 years of experience, that material is honed to perfection. Additionally, the 44 year old comedian has leveraged his connections (or, more likely, friendships) to attract numerous guest stars to his indie show, including names like Chris Rock, Ricky Gervais, Bob Saget, and Dane Cook. If you like Louis’ stand-up material, you’ll certainly like his show – and Louis is wildly prolific. He writes a new hour of stand-up comedy every year, while producing his own show, and has a long resume of writing, directing, and acting in films and television.

By all means, Louie is an unlikely show. Louis C.K. has managed to maintain full control of the production, to the extent that he writes, directs, and stars in every episode. It is a rare opportunity for an auteur to have so much independence from his network, and Louis has sacrificed much to run the show his way. The initial support from FX was minimal, and the show lived or died by Louis’ efforts alone. Against all odds, Louie found a home at FX, a network which is building a reputation for producing original and not-so-mainstream comedies, especially with Archer and It’s Always Sunny in Philadelphia in their weekly line-up. Oddly, single parents or the recently divorced may find the show particularly cathartic, as Louie tackles issues which both sets may find familiar. The easily offended, however, are better off avoiding the show entirely. Come to think of it, the easily offended are better off canceling their FX subscriptions altogether.

To watch the show is to delve into Louis’ mind, and at times that can be a harrowing experience. The humor is dark and crude, but reading between the lines is worthwhile. Behind the assaulting vulgarity one may discover carefully masked morality tales about tolerance, family, love, and respect. Most television shows, particularly comedies, don’t go to the trouble of incorporating that kind of subtext. Only while watching Louie do we see an elderly aunt offer her young nieces n****r-toe cookies, then realize that we’ve been taught a valuable lesson about tolerance and respect for one’s elders.

Be warned that Louie takes very few cues from traditional sitcoms. Rarely are episodes gift-wrapped with a tidy final act, restoring the status quo for the next weekly installment. Sometimes, episodes just end. Louis falls into perpetual debt, lovers leave him forever, or his children despise him – and there’s no attempt at a resolution. Are these ambiguous endings a result of Louis C.K.’s (unlikely) lack of creativity? Or simply a stylistic feature designed to highlight the pessimism which pervades every episode of Louie? In any event, casual audiences may be put off by Louie’s often unsatisfying or even confusing conclusions.

Amazingly, Louie is only a small portion of Louis C.K.’s career. In a revolutionary move away from traditional media, Louis has abandoned the big-budget networks to produce his own high-quality videos of his stand-up performances, paid out of his own pocket. What would normally feature as an HBO special is now available to anyone on the internet for the paltry sum of $5.00 USD. The wild success of this venture has prompted Louis C.K. to sell other media on his site (www.louisck.net), including MP3’s and concert tickets. Audiences will likely never find the FX-branded Louie on the site, but perhaps we can expect to see future projects from Louis C.K. streaming through our computers, tablets, and smartphones.

Over the past two years, Louie has taken TV in a new direction. The indie style and risqué subject matter will likely inspire other shows in the same vein. While Louie may be targeting a niche audience, it’s starting to look like a pretty big niche.

The third season of Louie premiered on June 28 and will run for thirteen episodes. The first and second seasons are available now on Blu-Ray in wide release and on Netflix.