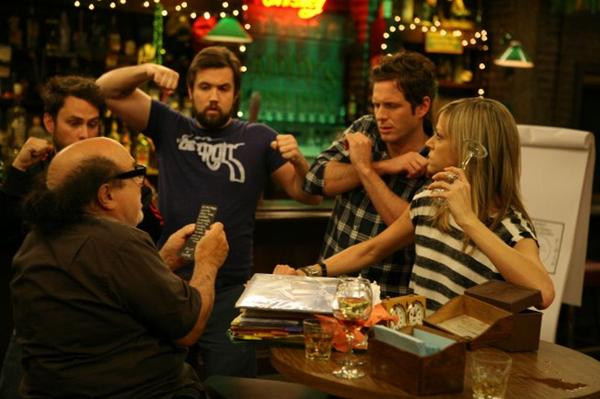 I flip flop on how much I like FX’s zany bad-person comedy It’s Always Sunny in Philadelphia. The inspired pilot and strong first season earned the show my continued devotion, but Danny DeVito’s grotesque Frank became a thorn in season 2’s side and has remained a symptom of the show’s idiotically broad tendencies ever since. But when Sunny is good, it’s really good and that was the case with season 7.

It started off slowly with a particularly dumb premiere called “Frank’s Pretty Woman”, self explanatory. Momentum started after that though with fun parodies like “The Gang Goes to the Jersey Shore” (with highlights including Charlie’s perfect night with the E-high waitress and lowlights including the ridiculousness of “rum ham”) and “Frank Reynolds’ Little Beauties” (an amusing satire of America’s creepiest tradition, child beauty pagents).

The middle of the season was sort of so-so, but things really got cooking with my favourite episode of the year “Chardee MacDennis: The Game of Games”. A homemade, cut-throat Dennis/Dee vs. Mac/Charlie tri-leveled challenge designed to test the body, mind and soul was the premise for the most precisely clever episode of Always Sunny since the first season. But it was soon to be followed by three more of comparable calibre. First was “The Anti-Social Network”, in which the gang visited a pretentious gin bar with an exclusive social-networking-only marketing strategy then set out to find and take down a rude “shusher” they encountered there. Then “The Gang Gets Trapped” geniusly planted the characters on a mission for escape after their delusions of grandeur led them on an Indiana Jones-inspired mission to “steal back an artifact” only to have the homeowners return mid-heist to air dramatic dirty laundry. “Thunder Gun Express” capped the show’s best run in years (interrupted briefly by the decent but far from genius “How Mac Got Fat”) with an inspired city-spanning adventure in real time, complete with catchphrases and fabulous motifs.

The season-ending 2 parter “High School Reunion” was more standard Always Sunny fare with a handful of clever jokes and plenty of broad silliness too. For every stupid wedgie joke there was a brilliantly delusional choreographed dance routine, so it all worked out in the end (including an uber-brief and utterly great cameo by the fantastic Jason Sudeikis). But that midseason run of greatness was pretty epic, proving that even after 7 seasons, The Gang isn’t tired yet.