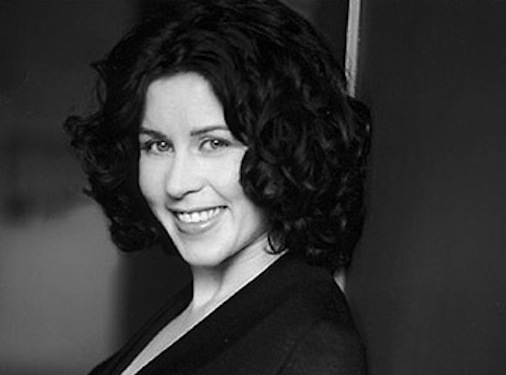 The indefatigable Best Supporting Actress in a Regional Production nominee found the time to answer some of our questions about her unique take on character as iconic as the Cheshire Cat.

Can you remember the first theatre production you ever saw?
My mom Diane English ran the Factory theatre for 18 years, so I grew up watching plays and rehearsals from the age of 6 months…  I remember seeing a lot of George F. Walker plays like Film Noir and Criminals in Love very young… and then all his plays that followed.. Neil Munroe’s Crossing Over made an important impression, as did The Clichettes when I was very small.

Where did you develop your triple threat skills?
I have what I call a “Franken-degree”…  meaning I sewed it together from a lot of individual training body parts: Going to NYC to study Meisner acting, the odd outing to Vancouver for crazy dance intensives, cross training in a dance styles from hiphop to tango, private coaching for singing, voice over, on-camera scene study… even a stage combat certification at Rapier Wit and improvising on a Kids TV show contributed to my education.

How did you first get involved with Red Sandcastle?
I met Rosemary Doyle doing My Mother’s Lesbian Jewish Wiccan Wedding at the Fringe and Panasonic, and she was a friend and colleague while I was running the Bread and Circus where we did Sorbet and the Single Girl / Carl, Suzanne and the Taxi-Man and Sunday on the Rocks by Theresa Rebeck (Smash).  But when she stayed up till 3 am to sort over a hundred cases of empty bottles, my respect and loyalty were cemented.

Had you ever done pantomime before?
No, actually!  Which is kind of why we did it! Because I thought it would be a good combination of everything I love! Acting, singing, dancing, comedy and improv! (Ross Petty– nudge nudge wink wink)

Tell me about the evolution of your unique Cheshire Cat and how he fit into Blunderland.
On paper (s)he was the Cheshire Cat. And a bobby. Which felt physically tricky because a British cop feels sort of rough and tumble cockney, but cats are really smooth and lyrical.  So we thought maybe more of a detective? A french detective like Hercule Poirot? Then we came up with the Pink Panther… and it all made sense. A detective and a cat.  Throw in some French Revolutionary spirit from Joan-of-Arc and the character was born. The swagger of the police and of the laissez-faire of a feline together!

That French accent- was there a little Inspector Clouseau in there?
I had the cartoon in my head more than I did Clouseau. My Cheshire is not a klutz at all… and the accent can at times be a little bit Latin American… A well travelled cat.

Your cat came back for the 2012/13 panto- what was she up to this time?
Well… we adapted The Shoemaker and the Elves to be The Shoemaker and the Pant-o-mimes.  When the daughter of the Shoemaker and his hilarious wife Twanky conjures some mimes by accident to make the shoes for evil designer Kenneth Coal, the mimes do nothing but MIME making shoes! So the cat saves the day by making the shoes herself, naturally…

Will she make future appearances?
Cats *do* have 9 lives… And this one has only lived 2 so far…

Do you have a favourite moment from Alice in Blunderland?
I loved pulling status on Rob and Doug Tweedledumb and dumber, and then the Queen of Hearts at the police station complaint desk by demanding they “Rrrring da bell” when I obviously already know they were there. And I love all the little improvised moments… Actually, I think I just love entering on stage, wearing what feels like track pants, to that Pink Panther sting and smiling.  Dadum. Dadum. Dadumdadumdadum… Dadum daduuuuuuum.

Do you have any favourite people to work with?
Oh yes! I work with a lot of the same people!! Especially when pulling together co-op projects! When you find a great combination of talent and enthusiasm in an individual, its pure gold! Rosemary Doyle, Dave Huband, Amy Wallis, Taran Beatty, Ric Waugh, Alison McCaughey, Matt Baram and Albert Howell are a few of the actors I’ve worked with on multiple self-produced projects.

What’s your favourite role you’ve ever played?
Oooo…. That’s really tough. I think maybe Ellie in Sunday on The Rocks.  I really like Rebeck’s writing. And that part was an arc and a half… and a romp, it was funny, and strong, and real all at once. I got laughs, and I got to pull a knife on a girl.  And I had to learn to play realistic drunk, which got me a role on Rookie Blue a year later!

Do you have a dream part you’d like to play one day?
My favourite thing in the whole world is to originate roles… Like I did with Cheshire Cat, or in the musicals My Mother’s Lesbian Jewish Wiccan Wedding, or Act Now! directed by Adam Brazier, or Grant Tilly’s Christian Republican Fundraiser in Dayton Tennessee, all three of which went to Best of Fringe.  So whatever dream roles I have probably haven’t been written yet… or are half written…

Which directors and actors have had a major influence on you throughout your career?
George F. Walker is the biggest. I watched him and his plays for hundreds of hours growing up. So actors like Peter Blais and Nancy Beatty, Susan Hogan… anyone from that era of theatre at Factory had a massive influence.  More recently, I have had epiphanies enjoying watching Nicole Underhay and Arsinée Khanjian on stage, and while being coached by Rosemary Dunsmore and Rod Ceballos. I’m the type of person who is influenced by every little event in my life though so that’s a tough question. Riding the TTC is the best character study room.

What are you doing now/ what’s your next project?
I started a film collective called Splinter Unit. We are making 10 short films and having a gala screening event. The people are amazing, I LOVE making shorts (I won TUFF 2 years ago and that encouraged me to do more). I am also freelance as a choreographer (currently working for Second City and Fallsview), dancer, blogger (currently writing for Real Estate agent Clive Mclean), producer, actor…

Do you have anything you’d like to add?
I think these awards are a great idea! It feels really good to be recognised for a role I loved doing in a tiny little theatre as an team effort equity co-op. More fun to come!