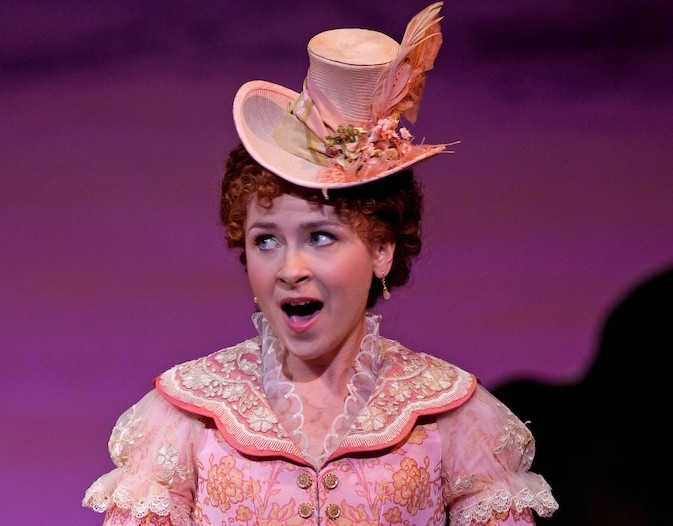 The delightful star of The Stratford Festival’s two big musicals of 2012, Amy Wallis turned in memorable performances as both Sally Brown (Charlie’s precocious sister) and Mabel, the feisty soprano of Gilbert & Sullivan’s Pirates of Penzance.

One of our Best Actress in a Musical nominees this year, Amy found the time to take us inside two of the biggest productions of the year.

What actors and actresses have always inspired you? Are they the same today?
As a kid I was really inspired by Julie Andrews. I still am, actually. Her voice was amazing. I also still find a lot of inspiration in classic Hollywood actors like Bette Davis and Jimmy Stewart.

When did you start singing? Have you always wanted to be in musical theatre?
I started singing as a small child. I would just listen to music and copy what I heard. I was obsessed with the music from CATS when I was only 4. I would sing and dance so enthusiastically to it that I would cause the record to skip. I began formal voice training at 11, and started dance at 6.

Tell me about your first day at The Stratford Festival.
I was nervous because it was my first season! People were very kind though.

Did you try to see every play in the season? What were some of your favourites of 2012?
I did watch every play in 2012. I always swore that I would if I worked at Stratford, so I had to put my money where my mouth is! I loved The Matchmaker, and Cymbeline. The War of 1812 was also a highlight.

Last season you stepped into Kristin Chenoweth’s Tony-winning shoes to play Sally in You’re a Good Man, Charlie Brown. What was in your mind when developing your performance- the Broadway revival? The original Peanuts strips? The famous holiday specials?
Well I knew it was a lot to live up to, and that people would have certain expectations. I just tried to go back to the comic strips, and create my own vision of the character. Donna Feore really gave me a lot of room to play, which I really appreciated.

My little cousin came with me to see Charlie Brown and made sure to catch you at the stage door for an autograph. What was the best kid encounter you had during the run of that show?
The best kid encounter was when Steve (Snoopy) and I did a talk back with some kids from Toronto. These kids were from a pretty bad area of Toronto (Jane and Finch) and had recently experienced losing a classmate to a shooting. They were so excited and appreciative, and asked some of the most interesting and intelligent questions I have heard from a group of kids. It was very gratifying to see kids be so engaged and inspired. They all wanted to hug and touch us! It was heart-melting.

Your My Theatre Award nomination is for The Pirates of Penzance. That production was one of my favourites of the year, how did you approach that much more classical text in contrast to Charlie Brown?
Well, we did a lot of work on the text before even putting the show to music, which I think had a huge payoff. Ethan is definitely one the best directors I have ever worked with. Really though my approach doesn’t change that much when switching genres. I just try to find what I think is the truth in each moment.

Gilbert & Sullivan aren’t known for giving their sopranos much to do character-wise, how did you make Mabel more interesting than she is on paper?
Well I think actually there is a lot of great stuff in the text for Mabel. It’s just a matter of finding it. When you sit down and read the lyrics to “Poor Wandering One”, they are actually quite hilarious and very revealing of Mabel’s character.

What’s the most challenging role you’ve ever played?
Well, I think it might have been Mabel, because of the vocal stamina it required when performing it in rep with Charlie Brown. Also Peter Pan was very challenging

Do you have any dream roles you think are perfectly suited to you or something completely against type you’d love to try as a big challenge one day?
Well, I’ve always wanted to play Eliza in My Fair Lady. I really, really hope I get to do it some time.

If you could pick one definitive moment in your career up to this point, what would it be?
Honestly I think getting to play Mabel in Pirates. It was really a dream for me!

Do you have anything you’d like to add?
Thanks so much for nominating me! It feels so great to be recognized for a role that I hold so dear!