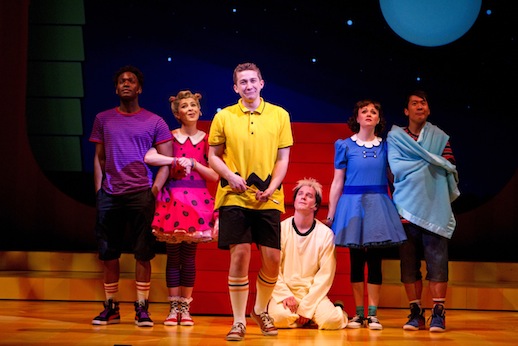 First a story: My dad doesn’t like Charlie Brown; he finds him depressing, and this is an argument we have every December when it’s time to pull out the old tape of Christmas specials. I love Charlie Brown and the whole Peanuts world (especially Lucy!). If I had to pick a Christmas special to call depressing, I’d have to go Rudolph, mostly because his dad is for sure bordering on emotionally abusive, but also because if something’s going to make me feel bad about myself, it’s that the end of Rudolph tells kids essentially that the thing that makes you different, and sometimes mocked, is the thing that will make you triumph one day and possibly even save Christmas. That sounds nice, doesn’t it? But the truth of the matter is that I likely will never save Christmas. I don’t have a red nose (actually, I do, but it’s not as much of thing if you’re not a reindeer); I’m that reindeer at the back of the pack who barely got claymated let alone given lines. And so are most of you. I’m not trying to be mean, my point is that we’re all so damn afraid of being mediocre (I’m one of the worst culprits- do you know how scared I was that Pottermore might put me in Hufflepuff?) that we’re perennially unsatisfied when we don’t save Christmas with the One Big Thing that makes us special. So we watch the Christmas specials and Rudolph teaches me that special people save Christmas, and I’m left feeling like the elephant that wasn’t quite purple enough to make it onto the island of misfit toys. But Charlie Brown, now he’s a guy that I understand, even if he is an annoying downer a lot of the time. There will never be a scenario in which Lucy doesn’t pull the football away. Never. And that’s okay, because Charlie Brown gets to be the hero of his own story just by trying to kick the football, even if he fails (which he always does, and will until the end of time). Charlie Brown is about finding happiness in “two kinds of ice cream”, among other things, and for most of us that’s the elusive childhood lesson we never managed to learn (probably because we kept watching Rudolph and every other underdog story under the sun). If the odds are all Rudy-like against you, in reality you are probably not going to score a touchdown, and that actually is okay, it’s totally fine, Charlie Brown never will either.

Okay, so worldview shared. What does that have to do with The Stratford Festival’s kids show? Well, as valuable as Charlie Brown is to adults (and, maybe more specifically, to people like middle schoolers), kids don’t really get it like they get The Muppets and their messages of “love each other” and “if you work together you can save the Muppet theatre!”.  Charlie Brown has an existential edge and jokes that soar straight over heads not attuned to nuance. So You’re a Good Man, Charlie Brown in Stratford is a bizarre production. I liked it- it’s decently executed and decently charming, if a little dull- but there are things the kids would like more, like Joseph (my favourite childhood musical), because it’s actually written for kids (as it is- my young cousin who came as my date to Charlie Brown said she really liked the colours and the songs!). The jokes, the lessons, the Point of Charlie Brown is something that slowly dawns on you as you get older, whereas the point of, say, Joseph is a little easier. Actually, my bet would be that the bigger hit with the kids in Stratford this season was The Pirates of Penzance. Yes, because there are pirates and silly pratfalls and the like, but also because it’s largely subtext-free and moves at a pace that will keep you entertained even if a joke or two flies over your head. You’re a Good Man, Charlie Brown works best as a nostalgia musical that teaches something to adults. For the kids, it’s mostly just colours and songs.

Stratford’s 6-person cast is a strong one though both Erica Peck as Lucy and Amy Wallis as Sally overact their kid-ness. The men play it a little more straight and it pays off. Kevin Yee’s earnest Linus is fun but he’s at his best when he’s executing director Donna Feore’s choreography. Andrew Broderick is an amusingly exasperated Schroeder and Stephen Patterson steals the show with all the infamous Snoopy scenes, though I found him tiring really quickly. The show’s best song, ‘My New Philosophy’, is pretty good, though the iconic Kristin Chenowith version is hard to cast from one’s head. My favourite part was predictably Lucy despite my expecting more from Erica Peck (so good in We Will Rock You). Lucy’s the sort of part that, were I a better singer, I would actually consider braving the stage just for the chance to play her. She’s fierce and hilarious and offers psychological advice for the bargain of 5 cents a session. On that note, her song ‘The Doctor Is In’ is a standout in performance and at the heart of the show’s message (“For although you are no good at music, Like Schroeder,/or happy like Snoopy/Or lovely like me,/You have the distinction to be/No one else but the singular, remarkable, unique Charlie Brown”).

Aside from my general love of the source material, there was only one thing about Stratford’s You’re a Good Man, Charlie Brown that really impressed me- Charlie Brown himself. Ken James Stewart is perfect in the role with his optimistic sadsack portrayal and lovely tenor voice. He’s more than the title character, he’s the actual star of the show- which is awesome because Charlie Brown doesn’t get to be the star of much.