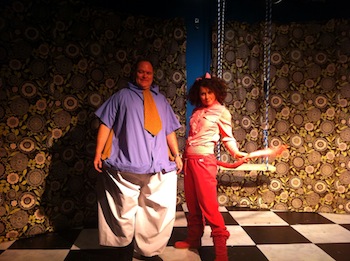 The Cheshire Cat in Blunderland

Red Sandcastle Theatre’s holiday pantomime was a silly, boring and painfully unfunny affair full of too-long and uninventive musical numbers, tacky and unfair Rob Ford jokes and truly dreadful writing from the otherwise outrageously talented Rosemary Doyle. Alice in Blunderland– presented as the indie, non-conformist alternative to the more corporate (and vastly superior) Ross Petty holiday panto- was far from worth the trek to the Queen East boonies, a blow softened considerably by the worth-the-price-of-admission performance by Jackie English as the Cheshire Cat.

Clad entirely in pink with curls piled high behind pink cat ears and aviators perched sassily on the bridge of her nose, English made the iconic cat entirely her own as a sardonic, enigmatic and french-accented officer of the law. English danced, sang, smirked and mocked her way through a dreadful production and almost succeeded in making me forget just how terrible everything but she was.

With Alice in Blunderland, Jackie English proved herself a performer to watch, a standout talent I’ll be looking out for in productions to come.