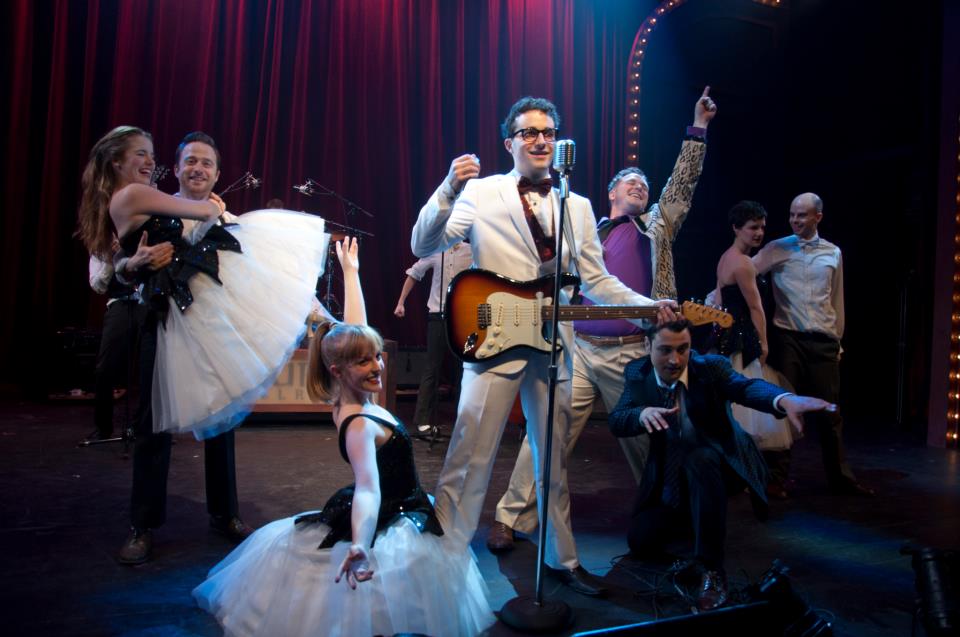 On Stage in Toronto: Something of Everything (I)

Toronto is one of the greatest theatrical cities in the world and this winter I’ve seen a smattering of productions that prove that across style, medium, budget, and venue. Here’s a sampling of some of the standout eclectic work from recent weeks:

The Student Show:
A friend of mine invited me this past weekend to York University to see the production that serves as the culminating project for his Devised Theatre degree. The students in the relatively small program were divided into four companies who then spent the entire year developing an hour-long piece from scratch. What his group “Theatre Zoetik” (a group of six who split duties from “performer” to “costume design” to “publicity”) presented April 4-6 was an abstract physical piece that had its ups and downs but was ultimately an affecting showcase of the scope of skills these students possess. Aragrad wasn’t just a display of basic play development and performance skills but rather a fully realized production with full dramaturgy and a sound design that could rival that of a professional production.

The Indie Show:
We at My Theatre are fond of the folks over at Soup Can Theatre and their artistically driven, socially minded, engaged-young-person style. Bouncing their fiercely conceived productions on small budgets around the Fringe circuit and small Toronto spaces, Soup Can has come to represent the indie theatrical market for us. And they didn’t disappoint with their recent double-bill, a unique pairing of contemporary one-act opera with a philosophical classic.

The evening began with Samuel Barber’s A Hand of Bridge, a very small piece at only about 20 minutes in length, but an extremely ballsy undertaking for a small-ish company. The logistics alone- finding four singers capable of handling the opera, wrangling a 15-piece orchestra- should have prevented Soup Can from taking it on. But with the steady hand of Pratik Gandhi guiding the affair as both director AND musical director, A Hand of Bridge was executed seamlessly. The set worked well with the theatre-in-the-round setup at the Ernest Balmer Studio in the Distillery District and the singing was stellar considering how rare the production of operas is amongst independent companies. Alvaro Vazquez Robles and Taylor Strande were the vocal standouts with beautiful melodic renderings while Keith O’Brien’s turn as David was the most dramatically memorable.

After intermission, the evening became more standardly “Soup Can” with Artistic Director Sarah Thorpe at the helm of a classic play with a modern social bent. Jean-Paul Sartre’s No Exit (aka Huis Clos) is a marvellous work both dramatically and philosophically, positing that “hell is other people” (a true statement that paired excellently with A Hand of Bridge– Soup Can is nothing if not thoughtful in their programming). Thorpe’s adaptation handled the text well, making the most of Sartre’s intolerable tension and keeping the action moving with strong physicality and pacing. Ryan Anning made a fantastic enigmatically frustrating Valet and Carolyn Hall a rambunctious and entrancing Estelle. My favourite was Daniel Pagett’s compelling Garcin- a fully realized, layered performance despite the occasional line flub- though I felt that Tennille Read’s stagey take on Inez was an unfortunate trance-breaker compared to the naturalistic performances around her (even including Anning’s hyper-stylization). The play began with a live projection of Twitter on the theatre wall, exploring the current uses of the hashtag “#hell”- an interesting intellectual proposition that struck the right balance between being thoughtful and unobtrusive to the actual storytelling. Though it dragged at times and Read’s performance left much to be desired, No Exit was Soup Can being its indie best.

The Small-Venue Musical:
The Randolph Theatre has a lot of seats, but it’s still considered a small theatre. The Lower Ossington Theatre is a mid-size producer that fills indie-friendly spaces like The Randolph with big commercial projects (its mainspace- The LOT- is currently running RENT), forming a sort of second tier of musical theatre in the city (something that’s been largely missing for years). After Mirvish and its main competitors (Livent, Dancap, what have you…), there are few companies that have offered the sort of big-ticket Broadway shows that really attract audiences (in all fairness, they’re tough rights to secure and often need big budgets and big casts). The LOT is filling that space smartly (grossly overcharging for tickets along the way, but what are you gonna do?) and now that they’ve started compensating performers, the quality of their productions has gone from middling-at-best to pretty-darned-impressive.

Their latest at the Randolph is Buddy: The Buddy Holly Story, a jukebox musical that’s actually more of a biographical play with lots of music than a real musical (aka a story strung together with music replacing some of or all of the dialogue). It’s also one of the most adorable things I’ve seen in a very long time. If I’d been born into the right generation, I would have been a huge Buddy Holly fan. He made fun music that was groundbreaking and adventurous with very little posturing and no obnoxious pelvic thrusting. He was a polite country boy who wore his glasses onstage and wouldn’t take no guff from nobody about trying to be “cooler” or “sexier” or “safer” or any other contradictory adjective. Colour me love-struck. But as much as I imagine I would have loved me some Buddy Holly were I about 50 years older than I am, I particularly love him as channeled by the lightning bolt that is Buddy‘s Eric Bleyendaal. I really loved this production but I barely remember anyone else who was in it- that’s how good Bleyendaal is. With strong acting chops and comic timing paired with a dreamy voice that not only captures Holly’s iconic lilt and idiosyncratic hiccups but actually improves on his tone, Bleyendaal easily masters the hardest thing about a role like this one- being the star. Holly’s not just the lead character, he’s an actual star, a character who has to outshine everyone else on stage to the point where the differentiation is literally “they are mildly interesting people but he is an icon who was one of the original inductees into the Rock & Roll Hall of Fame”. I don’t know what it was that he was doing specifically to achieve this effect but Bleyendaal managed to keep my eyes glued to him even when he was just standing upstage waiting for a showy guitar solo or complicated dancebreak to end. Anything less and the whole show wouldn’t have worked.

Mind you, I was sort of lying when I said I didn’t remember anyone else. I remember how enjoyable it was to watch Zachary Knowles rock out and wield his double bass like a weapon and how much Stephanie Seaton made of her smallest characters (she is a good Maria, but she is a Great ensemble member). I appreciated Jonathan Widdifield’s honestly complicated take on somewhat shady record producer Norman Petty and the bang-up job Robert Wilkinson did as Musical Director. The only things I didn’t love were Nathan Younger’s obnoxious Big Bopper and the occasional moment of draggy pacing (mostly in Act II’s bizarrely long concert sequence). Buddy is awesome fun but director Charles Roy puts in enough “The Day the Music Died” foreboding to keep the proceedings from spinning off their happy-fun-times axis (I could have done without the over-directed framing device and a showy choice or two but that’s purely nitpicking). The music is great, the singing is good, everyone plays their own instruments (well, I might add), there’s fun dancing and good acting and the text itself is (generally) pretty well put together. And it stars Eric Bleyendaal, which should really be the only convincer you need.

Buddy plays until April 21st- you should go.