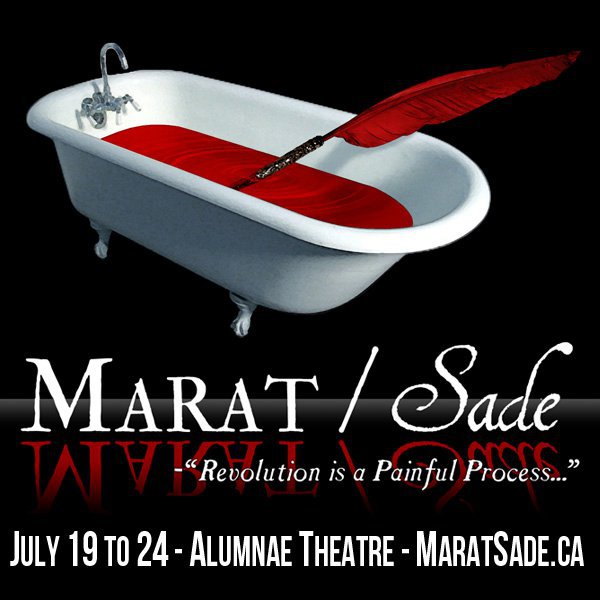 Soup Can Theatre’s production of Marat/Sade is packed full of great ideas, but they’re not always perfectly realized. Sarah Thorpe’s eloquent director’s note reveals the brilliant intellectual backbones of her interpretation- how she’s modernized the text to explore the themes in ways that are both nationally historic and hauntingly current. But her setting of 1957 Montreal gets lost in the play’s multi-layered frame. One chilling moment that would drive home the atrocities of the psychological experiments going on at McGill at that time is the only clear reference to the chosen time period, the rest of the frame understandably getting confused with the original setting of the world of the Marquis de Sade- a reality I’m not sure the text allows for the escape from.

Luckily, the terrifying 19th century world of the original setting does allow for vague modernization to explore Thorpe’s chosen themes, even if the specifics of her Canadian history expose don’t survive the translation. Those shiny white-tiled walls painted with opaque, un-washable blood stains could be anywhere, anytime when the mistreatment of the mentally ill taints history. With the limitations of the frame, Thorpe succeeds in stripping Marat/Sade from its time period but doesn’t quite succeed in adding her own.

She does, however, do great things with the timeless frame she is able to create. The play begins with the entire cast and band (a surprisingly large crowd) being led in by a rope, like pre-schoolers allowed out for fresh air. The helpless blankness of the ensemble of patients is startling, and the ones who don’t fall in creepily silent line are even more off-putting. You know the room is tense when people squirm at the word “hello” from a character. Once deposited on the stage, the patients are left to their own devices. This is where detailed direction and a remarkably strong and creative ensemble really shine. Each character- at this point nameless and undefined- suffers from a different affliction, made clear by the way they interact with their environment when given nothing else to do. Some squirm, some pick at their clothing, some sit catatonically still.

How each ensemble member blends these frame characters with their roles from the Marat side of the story varies from actor to actor. Some, like the wonderful Hearther Marie Annis, infuse their Sade-assigned character with the afflictions of their mental patient. Others seem to use their historical characters as a basis for creating their frame personas.

Among the talented cast, four performers really stand out.

Most notably, Liam Morris’ take on the key role of Jean-Paul Marat is superb. Confined to a bathtub throughout the entire production, Morris projects the worn down exhaustion of a passionate individual who can no longer process the flawed world in which he lives. Soft-spoken but direct, his Marat is single-minded to the point of destruction, a man of such vision that he’s become completely blind to everything around him but himself and the point he’s determined to make. It’s a remarkable performance full of character complexities delivered so subtly that my vocabulary lacks the adjectives to get across the interpretation in words.

On the other end of the scale, Kat Letwin’s performance as the Herald is loud, exuberant and what one might call “zany”. She leads the play and the play-within-the-play with a sort of source-less authority that’s at once admirable and vaguely threatening. Her frame character bops ignorantly along with music but will slip into a stupor when touched sinisterly. In a balls-to-the-wall performance, Letwin attacks both levels of the role full throttle, even making sense of her ridiculous Dr. Seuss-like couplets. It’s that precarious line between too much and not enough that Letwin walks beautifully.

The aforementioned Annis is perhaps the biggest star of the production. A major talent, Annis takes a break from her clowning career to deliver an understated and haunting performance as the patient charged with the role of murderer Charlotte Corday. Without ever taking it too far, Annis move perpetually, never standing still during the 2 and a half hour production. It’s as if her character is fundamentally uncomfortable in her own skin, desperate to get out of it somehow. Even her voice quivers as she beautifully sings Charlotte’s solo. Most horrifying is her desperate squirm whenever Andrew Fleming’s Duperret touches her. Hers is the traumatized unease and underlying rage of an abuse victim, only finding steadiness as she wields the knife in Marat’s final seconds. It’s a truly phenomenal piece of acting.

The final performer who really caught my attention is Katrina Carey as Simonne Evrard. Striking an excellent balance between her frame character’s ailment and her historical role as Marat’s caretaker, Carey delivers arguably the most believable performance of the lot. Her Simonne, uselessly and blindly loyal, is palpable as she develops a heartbreakingly truthful one-sided chemistry with the man she lives to protect. It would be easy to overlook Carey when she’s flanked by such strong performers in much flashier roles, but to miss her nuanced performance would be a real shame.

The rest of the ensemble is similarly devoted to their performances in what is Soup Can’s best effort yet. Last year’s cabaret Love is a Poverty You Can Sell marked a very strong beginning for the young company and with Marat/Sade they’ve proved that they’re just getting started.