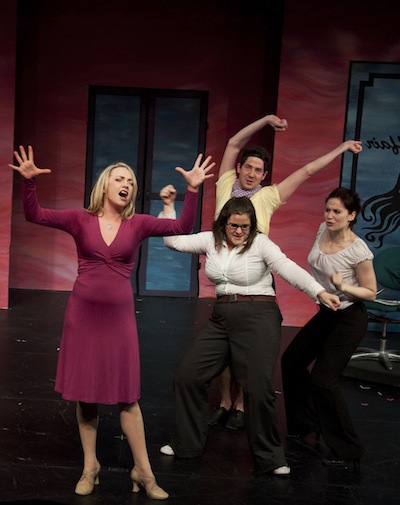 If I were a Legally Blonde character I would be a not-so-delicate combo of snobby conservative Vivienne Kensington and frumpy, loudmouth intellectual-liberal Enid Hoopes; but despite this uber-brunette pedigree, I am an unabashed Elle Woods fan. I think she’s the greatest. The world needs kind and well-meaning characters like Elle and her empathetic optimism, and if they’re secretly really smart, all the better. I loved the original Legally Blonde movie and I even love the musical adaptation, which I saw on Broadway and when Mirvish brought it in (there are a couple dumb alterations like making Emmett more responsible for Elle’s success than she is, but there are also some truly great songs like “So Much Better” and “Ireland”, a tongue-in-cheek use of the classical “greek chorus”, and lots of entertaining dance numbers). Legally Blonde is lighthearted fun. It’s not as shallow as it seems, but then again its not great art either, it’s lovely and positive and, like Elle, has a brain to go with its heart. But in the Lower Ossington Theatre’s recent version, the enthusiastic heart was so overshadowed by shoddy production that it was barely noticeable.

The set by Michael Galloro and direction by Tricia Lackey smartly sidestepped many of the issues of a showy piece on a smaller budget. The set looked a little cheap, but it served its purpose as best it could and the transitions were, for the most part, workably paced. Kathryn Ballantine & Jody Rolfe’s costume work, on the other hand, very much detracted from a lot of the characters. They nailed Warner’s preppy douche-bag style and the crucial Elle ensembles were okay, but that poor chorus of soriety girls looked like Jersey Shore rejects in cheap sweats and hoochie shorts (part of the fault also lies with hair & makeup designer Erica O’Reilly). Sororiety girls are not, by definition, trashy. Some are, sure, but many are vainly chic and there’s no way Elle would have allowed her friends to live like that without a fashion intervention. The greatest victim of styling failure, however, was the tragically dressed Marrisa Dingle whose Vivienne was frumpier than Enid at times. Dingle doesn’t look like most Viviennes, but that doesn’t mean she should be dressed in ill-fitting wallflower getups. The point of Vivienne is that she’s the “Jackie” to Elle’s “Marilyn”, at least in shallow Warner’s mind- that’s Jackie O, fashion legend. At least give the girl a chance to pull that off with a little attention to making her not look like a mean, middle-aged math teacher. The rest of the production aspects were downright amateur with bad sound balance and Hawaiian Punch-coloured wine (really?! Just google how to make stage wine!).

As for the actual performances, the leading lady, though cute-as-a-button and perfect in attitude, simply doesn’t have the voice to pull off Elle (who requires a surprising amount of power). Jeff Hookings, similarly, nailed Warner’s fun jerkiness but couldn’t hit any of his notes. Dingle, styling aside, wasn’t quite right as Vivienne- too mean for the redemption to make sense, not quite posh enough to sell her romance with Warner- but she hit those impossible high belt notes (Vivienne sings very little, but when she does she busts out). Poor Aaron Wolfe was forced to dye himself orange to play Sandeep Padamadan, which felt like something a racist 70-year-old might suggest instead of going and finding someone with middle-eastern heritage. Sean Cage was cute as Emmett but his singing was flat and Gillian Bartolucci’s sassy-sketchy take on Pilar was downright obnoxious.

It gets better from there though, I promise.

David Hohl was the standout of the cast, which is odd since he was playing the forgettable and weakly written part of skeezy Professor Callahan, but he did it with presence and dry humour. I liked Heidi Thomas’ Paulette though she was a little forced at first; she struck the right balance between pretty vocals and all-out comedy in “Ireland” and that great reprise, then, oddly, got better in the mediocre musical version of the infamous “Bend and Snap” scene. When Alyson Workman showed up as Brooke Wyndham in that always-impressive and really well constructed workout video/case review scene, singing “Whipped into Shape” while jumping rope, the production improved dramatically. Why the excellent Workman wasn’t doubled so she could be in Act I is beyond me because they certainly could have used her there. Also mysteriously not doubled was Graham Fleming who is always awesome and was literally the best thing about this production with that fantastically weird Jamaican rap thing that plays counterpoint to Elle studying in “What You Want”. The baby-faced Fleming looked like he was having a blast as Grandmaster Chad, so we did too. Chad is usually doubled with Kyle, the hot UPS guy, but Trevor Williams was just ripped and swaggy enough to rock that part, so I was glad to see they didn’t double it. What they should have done was doubled Fleming as Emmett since Chad is strictly in the pre-Harvard bit and he definitely would have been an improvement on poor over-matched Sean Cage; but there MUST have been a reason that extremely obvious idea didn’t cross Lackey’s mind when she was casting. Seanna Kennedy was kind of delightful as Enid Hoopes, however, and Emilee Nimetz and Kelly McNamee stood out amongst the generally strong “greek” chorus (especially McNamee, who played geeky Kate with hilariously exasperated exuberance).

In an odd twist, the second act was far superior to the first, despite the first being generally better written (or, at least, I’ve always greatly preferred it). Maybe it was the addition of Workman’s character, but odd/terrible songs like “There, Right, There”- which is that delightful combination of cheesy and offensive- were some of the company’s better numbers. The similarly ridiculous “Bend and Snap” was a great moment for Paulette and the trio of principal chorusters (Nimetz, Bartolucci and Kristi Woods). And “Whipped into Shape” was probably the best non-Grandmaster Chad-related song of the production.

There was a lot of trying in LOT’s Legally Blonde. Everyone came at the surprisingly tricky piece with everything they could and, particularly with Sarah Slywchuk’s choreography, had some success. But Legally Blonde was just a little above this company. Okay- sorry, I’m in Elle sympathy mode, back to Vivienne- Legally Blonde was far above this company, out of reach. You can look down on the show’s content all you want (though you really shouldn’t) but it takes some really talented people in all areas of production to pull of a great Legally Blonde and LOT just didn’t come prepared.