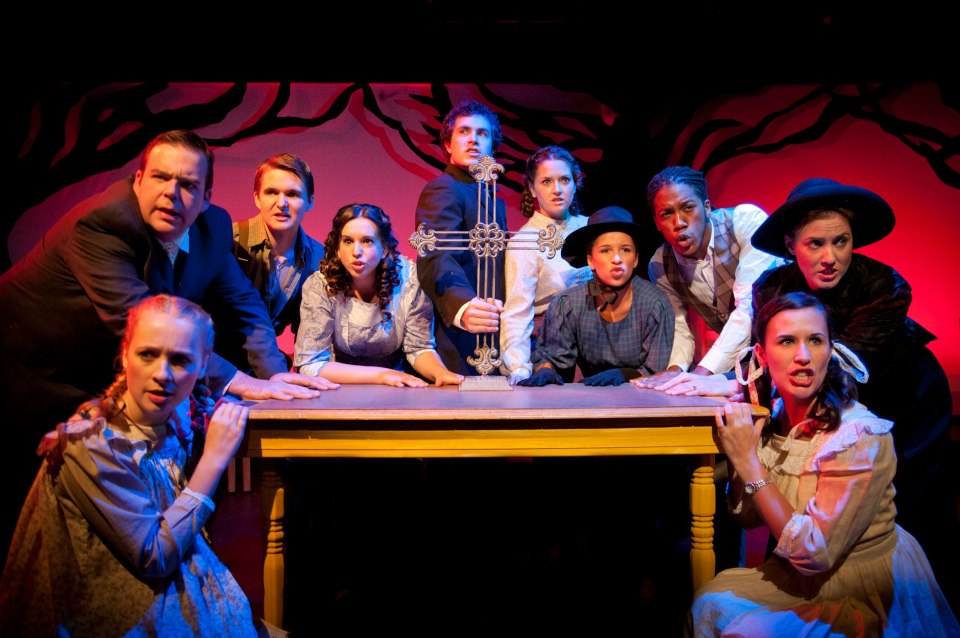 I was slightly apprehensive to attend F.U.D.G.E’s Parade after the Joseph . . . Dreamcoat debacle. However, the company seems to have outdone themselves, and they are back to their creative high from last fall’s award-winning Spring Awakening. The return of some of their strongest company members with Joey DeMita’s strong direction makes this production a must-see.

The stage is sparse, but provides just enough set and props to tell this lush and sweeping story. DeMita impressively designed both the set and lights, accenting the perfect balance. The light colors and changes are perfectly designed to shift the mood and location for this muti-faceted and epic tale. The costumes by Tina Cersosimo are smartly crafted to diversify this compact cast of just fifteen actors, playing close to thirty characters. This challenge would be overwhelming for most other costume designers, but Cersosimo makes the changes crisp, efficient, and beautifully portraying of the diverse world. Steven Bergman is once again stunning in his music direction; Bergman notably music directed last fall’s Spring Awakening and I missed his keen harmonizing and blending skills. Bergman and DeMita’s cast never sounded better.

I found it refreshing and exhilarating to find DeMita does not disappoint. He exceeds expectations with less than nothing budget-wise. (Aside: I am still confused as to why this company always seems to struggle with money issues- can someone please donate to FUDGE so I can see DeMita really flex his directing muscles? *End of Aside) Each scene flows seamlessly into the next scene with mere tables depicting more than I thought possible. The focus is definitely on the actors and this breathtaking story; DeMita’s sharp eye and thoughtful imagination creates the world before our eyes in innovative ways. I would frequently forget that the prison cell was really only two tables, or that the same set pieces serve as the defendant’s table during a trial. Bergman’s orchestra (what a sound!) help usher in each scene change, tackling Jason Robert Brown’s score with bravado.

The true mastery is the talented cast. I remember from my Theatre History classes that Parade is considered one of the finest, and under-appreciated, pieces in all of musical theatre. Quite a statement, but this production certainly reminds an informed audience member that this statement is no hyperbole. With a sweeping opening, beautifully sung with longing and skill by Matt Phillips, the audience is ushered into a world on the precipice of change. The ensemble enters with bursts of energy, commitment, and character, and I knew I was in for a treat. The ensemble sounds and looks exquisite, but, more importantly, the ensemble effectively tells the story in subtle and honest ways. Immediately after the awe-shaking “The Old Red Hills of Home”, we are introduced to our star players. Adam Schuler tackles the difficult and complicated Leo Frank; Lori L’Italien soars as his wife, Lucille Frank. Honestly, Schuler didn’t do it for me, but I came into the production doubting his ability to handle such a role. He played Ernst brilliantly last fall, but I think Leo Frank was just a little outside his current abilities. However, Schuler’s commitment, beautiful character arc, and pathos convinced me by the end that he is still growing as a performer, and I look forward to seeing his future roles as he refines his abilities.  L’Italien is the true star in this performance; she is breathtaking in every moment, and I wish DeMita had focused more on telling her story through each scene. As my friend stated, “Most thespians and theatre aficionados grossly mis-categorize Parade. It’s the Lucille Frank Show.” L’Italien convinces me that this show is her story, and she has everything of a star performer. L’Italien’s singing is simply stunning, and, late in the first act, I started counting my goosebumps. More on that later. Take note: L’Italien is more than worth the price of admission.

I didn’t care for Matt Phillip’s Frankie Epps or Tristyn Sepersky’s Mary Phagan. Phillips tries much too hard to look and act young, though he does recover soon after Mary’s death, and his sorrow and anger is stunning acting. Sepersky is, in a word, boring. Despite her brief stage time, Mary Phagan is chiefly important. The lackluster performance would be an interesting choice, but somehow I doubt it was intentional. Luckily, once Mary is dead, we move onto more interesting character work.

I found some of the doubling confusing, particularly Ross Brown. Brown is exquisite in all three of his roles, but I found his Governor Slaton and Britt Craig confusing to navigate at first. “Real Big News” was a showstopper, and “Pretty Music” was equally dynamic. I think that both numbers popped more than the other musical numbers made the doubling especially confusing. Unfortunately, not every character conquered the doubling with equal aplomb. Kelton Washington had the difficult task (with the beautifully talented Kira Cowan) of carrying all the African American roles. Because of this doubling, Washington suffers under the strain. Ashley Korolewski, Susie Lunt, and AnneMarie Alvarez warm-up to their roles as Iola Stover, Monteen, and Essie, respectively, singing a haunting version of “The Factory Girls”, but their real heart is in the reprise.

While some of the ensemble didn’t shine quite enough in their respective roles, as a company, they are especially strong at storytelling, harmonizing, and winning this reviewer. Overall, this show is not to be missed. It’s a timely message told through captivating songs and artful direction with heart and commitment. On a related note, F.U.D.G.E.’s season really could not get any better. Their next is in January with the play As Bees in Honey Drown, followed by an original new musical “Drawin’ on the Walls”, and finishing with a crowd-favorite musical, Assassins.