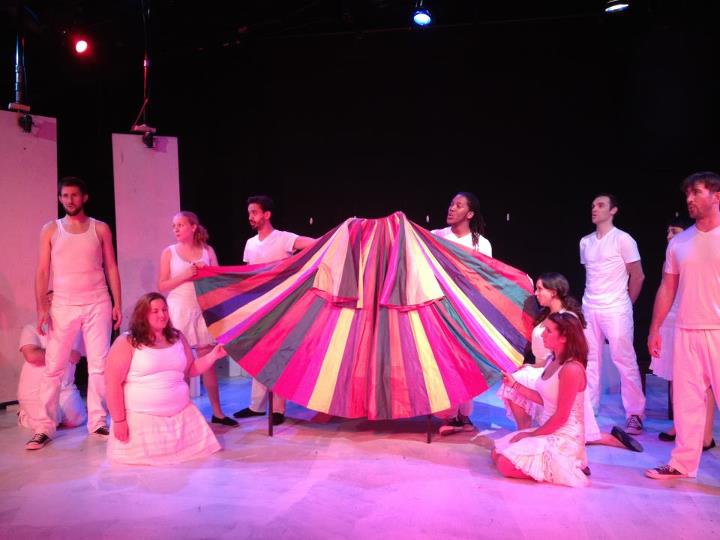 FUDGE and the Mediocre Dreamcoat

I love Andrew Lloyd Webber; his shows are always big, colorful and dramatic. Joseph and the Amazing Technicolor Dreamcoat calls for a ton of small characters- eleven brothers, eleven wives, an entire children’s chorus. So, I was intrigued by the idea of a production of Joseph in a black box that advertised a small cast size. This show went out of its way to let me know that it was innovative. That always worries me. If your show is really great, and also innovative – sweet; but I tend to think that if you push the “we’re innovative” thing, it’s supposed to make up for some other sort of short coming.

They began with a framing device, the saving grace of alternatively staged theater. I’m a fan of a well-used framing device and willing to chalk up what would normally be flaws to its storytelling power. The actors entered in street clothes, carrying purses and bags – looking as if they were going to the beach or on some vacation. They took in the scenery, and smiled at the open trunk (the only set piece on stage). They quickly returned dressed all in white, to match the set and stage. The black box was really a white box, and I loved it. Far too many shows try to be ‘serious and dramatic’ by dressing the entire thing in black, with an accent of red. White fits this show, in its cheer and its ability to display the requisite rainbow of color from their light set-up. The only problem with this white-box frame device is that I couldn’t tell what the frame story was. Were they beach-goers putting on a show? Cheerful dead people on their fluffy white clouds? Upon further examination, I realized they were supposed to be a travelling theater troupe. OK, that sort-of works. It gives a reason why most of their costumes came from their travelling trunk. It was an excuse for the low production values (which didn’t need an excuse in my opinion) but didn’t enhance the story at all.

However, a well-told story doesn’t need the enhancement, so as long as the execution was good, I was still prepared to be pleased. The musicians were few but mighty. They handled the score meant for an orchestra with skill, and were balanced well for a space with a less-than-perfect acoustic set up. The chorus also tackled the score very enthusiastically; they sounded well rehearsed and were fun to watch. The harmonies in the show are gorgeous, and the cast did them great justice, and with fewer people. Unfortunately the harmonic awesomeness was too much for the leads on occasion. There was a significant balance problem, many times the important lyrics sung by the leads (there are no spoken scenes in this show) were completely drowned out by the chorus.

The lead actors, Aidan Nevin and Alaina Fragoso playing Joseph and the Narrator respectively, had complimentary strengths and weaknesses. Nevin sang the difficult role well (Joseph is a high tenor part). Unfortunately his face had a tendency to go blank while singing. Even during his big dramatic piece “Close Every Door,” there was little to be garnered from his countenance. Fragoso, on the other hand, was energetic, funny, and expressive; but she seemed to have difficulty reaching some of her notes, or keeping up the immense power and stamina needed for The Narrator. The chorus held on strong, often showing great vocal prowess and fantastic dancing (the show was choreographed extremely well). Each of the brothers got a moment to shine, and shine they did.

The show was directed and choreographed in a way that cleverly used the small cast. Director, and F.U.D.G.E. artistic director, Joey DeMita handled the group skillfully with a great sense of the absurd that jived perfectly with such a tongue-in-cheek show. A lot of thinking went into this production: how to utilize the actors to their fullest, both as warm bodies to make the family look big enough and in the music to make the sound full enough. DeMita succeeded in this regard. However, there were a few things stretched too thin, such as actors who needed a little more work on having emotion while concentrating on singing, or someone listening to the final product to say, “Hey, I can’t hear the leads over the chorus”. It’s the little things that put a damper on an otherwise fun show. I went in wanting to like the production, and I did. I enjoyed watching it, I laughed and had fun – so the little things that brought the experience down made me all the more sad. I still recommend DeMita as a director, and F.U.D.G.E. as a group – this show simply lacked polish.