I was raised on Rodgers and Hammerstein; in fact, I didn’t think there was any musical that I hadn’t seen by this famous musical writing team. And then I remembered Carousel. Richard Rodgers is cited as saying that it was his favorite of all his musicals, quite a compliment given that Oklahoma! preceded it by just two years.

Carousel is a timeless story of carousel barker Billy Bigelow and his intense romantic relationship with the local factory girl Julie Jordan. Most audience members know how it ends, if only because of the very famous and incredibly moving “You’ll Never Walk Alone”. However, Friends United Developing Genuine Entertainment (F.U.D.G.E.) Theatre Company prove that this show is more than a simple love story about two ill-fated lovers. FUDGE’s production is passionate and moving- pulsing with vibrancy- and the production features exceptional performances from, most notably, the secondary characters. 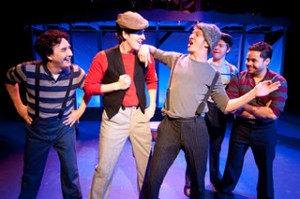 I had never been to the Watertown Arsenal Center for the Arts, the play’s venue, and I was shocked to find myself entering its black box even though I was there to see a musical (a proscenium arch stage featured a different production upstairs). Thinking that there must be some mistake, I looked for an usher, but that’s when I saw the beautiful twinkling lights and thin poles of a representational carousel. The set is simplistically stunning and the orchestra is cleverly seated above the carousel. I knew I was in for a wildly different performance than my previous Rodgers and Hammerstein experiences. Luckily, I was not disappointed.

The opening scene is quite famous for not featuring a prologue; the audience is quickly thrust into the action of the play and introduced to the characters through a pantomime dance. Joe DeMita’s choreography in this number is beautiful and features a quite talented female dancer on the carousel. 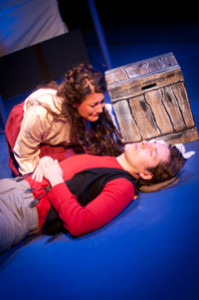 Yet I somehow felt disconnected with the central characters Julie Jordan (Stephanie Schapero) and Billy Bigelow (Dave Carney). I would get hints of individual connection with each of them at different times throughout the evening, but I unfortunately never bought into their relationship. I may be a cynic but I found the opening scene charming but not moving, and much of the first act struggles with the unconvincing central love story. Schapero has a lovely range and tone, but her beginning scenes fall flat. Carney has an interesting timbre and I can objectively appreciate his vocal training, but I’m not convinced it’s the right fit for Billy. The void in their chemistry drags the plot in parts, but luckily, the supporting cast provides exemplary performances.

As I said, the supporting characters really steal the show. Patricia Peterson Jamison is awe-inspiring as Nettie; she knows exactly who Nettie is as a person, but also, and more importantly, how Nettie fits into the show. Jamison is a rock, providing energy and heart for “June is Bustin’ Out All Over” and “A Real Nice Clambake.” Her show-stopping ballad “You’ll Never Walk Alone” lays out every emotion in a neat 2-minute song with control and restraint that compelled me to let loose my own tears. As my friend said later, this song is iconic, and Jamison made it her own in a powerful way. Equally effective, though more surprising, is Christian Masters as Jigger and the Carnival Boy. Masters plays both roles with the same charm and dashing good looks, but his use of physicality, costuming and relationship-building creats two wildly different, exceedingly effective characters. While he may not have the best voice in the cast, Masters approaches his solos with such character and confidence that you almost forget he’s singing. He commands the stage and developes compelling chemistry with every character onstage. 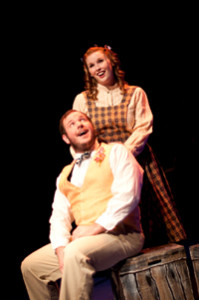 Holly Ann Marshall’s Carrie Pipperidge is colorful, naïve, and dynamic onstage, featuring some hilarious facial expressions. With a twitch of her mouth, Marshall tells us that she is in command of this character and the scene. At first, I was convinced that her Carrie was over-the-top and unbelievable, but I later softened and appreciated the wonderful dichotomy Marshall had created between herself and Schapero’s Julie. Unfortunately, Marshall’s commitment to her role and fine acting abilities can’t save her relationship with T.J. Rufo’s Enoch Snow. While I heard some harsh criticism in the audience of Rufo’s acting performance, he can really sing and Enoch is a pretty difficult tenor role. Rufo pulls off an impressive vocal range during “When the Children are Asleep,” matching Marshall’s Carrie perfectly. Unfortunately, I can’t say the same for the more popular “If I Loved You” between Carney and Schapero, where Schapero failed to show heart and Carney failed to hit the ending notes. I don’t think I would be as judgmental, given the difficulty of the music, if the song wasn’t so iconic but Carney’s voice sounded tired and it was still early in Act 1.

Last but not least, Kimberly Fife is almost too pretty to play the tomboy Louise, but she’s flawless in the “Ballet,” and her scenes with Carney proove incredibly moving. In fact, every character seems to hit their stride after the fifteen-year jump forward, creating a finale so passing description that it simply needs to be witnessed.

I was warned to bring Kleenex and, at the beginning of the show, I was sure that I hadn’t made a mistake by leaving the house with empty pockets. I was wrong. Don’t make my mistake, go see FUDGE’s Carousel for its beauty, its stunning directing decisions, its strong supporting cast, and the moment when you connect with a show written close to seventy years ago because of a cast’s commitment to the story and messages of the writers.

At Luminato: The Life and Death of the Artist as Idol
Wolf Hall – Part I and II
Gypsy at the Savoy Theatre