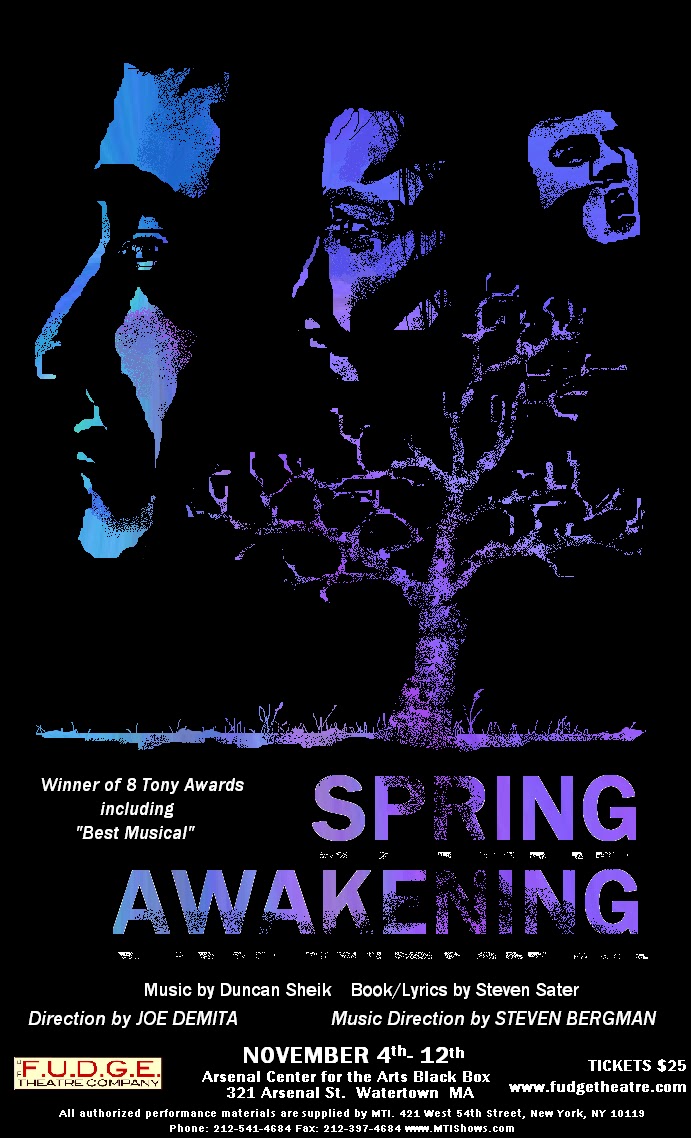 “Spring Awakening” Stirs Energy and Passion from its Talented Cast

I never saw the original production on Broadway; in fact, the F.U.D.G.E Theatre Company production (one of the first in the New England area) is my first foray into Spring Awakening’s dynamic rhythm of awakening youths. Impressed with the company’s summer production of Carousel, I was anxious to see Joe DeMita’s creativity in the punk-rock style, but, more specifically, I wanted to see if he would appreciate the German expressionism from the original play.

I wasn’t disappointed in DeMita’s choices towards minimalism when it came to the set and staging. The stage is almost barren from start to finish- the actors bring on chairs, tables, and appropriate props to differentiate the scenes and locations- and stage manager Julia Murray keeps the production moving at a wonderful pace. DeMita’s creative use of ropes tethered to the ceiling, wrapped around characters, and tugged in interpretive choreography is effective in some points of the show, but it also distracts from the stunning chemistry and relationships between the actors. In a play about intimate bonds, I felt disconnected from the characters, wondering what the undead-looking ensemble members were going to do with the ropes next. I appreciate the wonderful metaphors around tying the characters up in their own confusion and emotions, but the choice ultimately detracts more than it adds.

But despite any strange devices thrown into the production, absolutely nothing could detract from the solid performances at its core. Jared Walsh’s Melchior Gabor is stunning and compelling. Walsh creates a boy on the brink of manhood with responsibility, earnestness, and compassion, displaying intense chemistry with everyone who enters his world. His presence drew me into the story as his moral dilemmas became enthralling and convincing teenage angst with unshaking intensity and conviction. His rich tenor voice adds to his smooth sex appeal, a necessary and welcome trait for the understatedly tricky lead role.

Joining Walsh at the centre of the story is the talented Alaina Fragoso as Wendla Bergman, the young and naïve ingénue desperate to learn about life’s mysteries, specifically the age-old question of where babies come from. Fragoso starts out slow with an underwhelming rendition of show-opener “Mama Who Bore Me”. The melancholy ballad pays homage to the original production by copying its worst choreography (though its echoes in “Totally Fucked” are conspicuously absent) and Fragoso’s voice wavers feebly through the challenging song. But she quickly settles into the role, leading the female ensemble expertly and improving with each number until her climactic “Whispering”. With the help of Walsh’s phenomenal chemistry, the relationship between Melchior and Wendla is exciting in the best possible way, perfect for the curious and confused adolescents who are anxious and unsure about exploring their desires and feelings. Fragoso is superb at her vulnerability, but her Wendla is a pawn to others’ whims; I would have enjoyed seeing such a strong actress challenge the role’s limitations. Her “Those You’ve Known”, however, is especially strong and haunting, harmonizing beautifully with Walsh and Ben Sharton’s Moritz Stiefel.

Sharton, in the musical’s flashiest role, is at his best here; his voice soars in “Bitch of Living” and “I Don’t Do Sadness”, showing an impressive range and tone through the difficult music. His accomplished singing is limited, however, by his acting. Though their on-stage friendship has a well-developed bromantic strength, Sharton seems lost without Walsh’s command- a dynamic that isn’t altogether unhelpful considering the characters’ relationship, but robs Moritz of some of his more fascinating layers. In Sharton’s defense, the script is hardly forgiving for struggling actors, taking some of the oddly phrased dialogue directly from Frank Wedikind’s original play in translation.

Without Walsh’s strong presence beside him, Sharton’s key scene with Ilse flounders slightly, the slack picked up by Jackie Theoharis’ phenomenal performance as the socially ousted free spirit. Theoharis captivates every moment she’s onstage; I often found myself distracted during ensemble numbers by the beautiful blond with the dynamic stage presence. The ensemble’s other standout is Matt Phillipps as the easily overlooked Otto, the only person on stage who ever managed to pull focus from Theoharis. With a comfort and enjoyment for the stage, he adds a delightful energy to ensemble numbers, making such soaring anthems as “Totally Fucked” truly memorable.

The ending of the show was a bit of struggle as I found myself not caring for Moritz as much as I needed to. Thankfully, Jim Fitzpatrick’s stunning turn as Moritz’s father was enough to bring tears to my eyes. He and Linda Goetz ease seamlessly through their many adult characters, delivering diverse performances and rare empathy for the somewhat two dimensional authority figures. His performance in this was also the best I’ve seen from Brian Vaughn Martel, as the dry and domineering Hanschen. Vaughn Martel’s comic timing is spot-on during “Bitch of Living” and he milks each moment in the limelight. I will never agree with the typical interpretation of Hanschen and Ernst’s relationship, but Vaughn Martel and Adam Schuler are appropriately awkward together and play the scene for its usual effect.

On the technical side, the lighting design by PJ Strachman is particularly effective (especially in such a minimalist show), appropriately transforming the stage from schoolroom to woods to cemetery. Equally effective is the strong, yet small, band led by musical director/conductor/keyboard player Steven Bergman. Though the rich orchestrations do suffer from the pared-down arrangements (and, in particular, a lack of strings section), Bergman does an impressive job with the ensemble numbers, especially in Act 2. The on-stage band blends brilliantly into the set while creating the appropriate level of intimacy between the singers and musicians. While there are some notably strained voices, the ensemble members mostly blend well and feature some talented vocalists in extremely catchy numbers. For a modern musical, the songs of Spring Awakening are surprisingly addictive and I can’t help but repeat my favorites, wishing I had F.U.D.G.E.’s cast to sing and harmonize the beautiful score for more than the mere two-hour show.

If you missed the original production on Broadway or you are looking to revisit this recent gem in modern musical theatre, catch the final weekend performance of this talented and progressive production.

Spring Awakening closes tomorrow night, Nov 12th after a final 8pm performance at the Watertown Arsenal Center for the Arts.