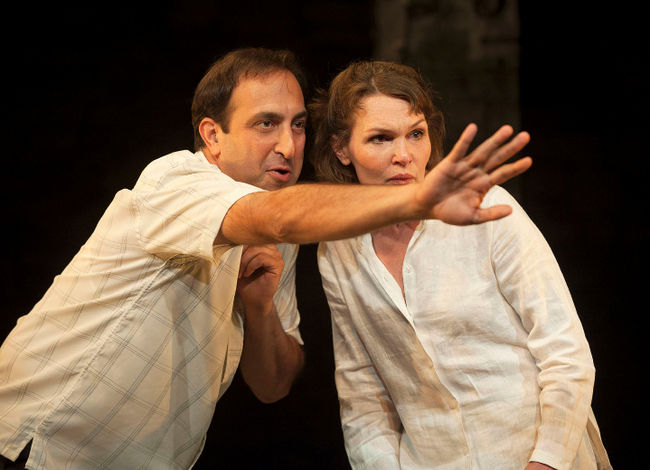 At the Shaw: Helen’s Necklace

The studio theatre last year was home to some of my favourite Shaw Festival productions. It’s where the festival breaks out of the period mold, drops the accents, and explores a little bit. But it only works if the text being put on is worthy of the creative space, like When the Rain Stops Falling and Topdog/Underdog were last year. Helen’s Necklace isn’t worthy. Or maybe it could be worthy and just gets a little dragged down by its delivery (not likely, it takes itself far too seriously and aims for meaning but achieves little). All I can say is the one-hour production had me checking my watch.

Micheline Frechette’s direction is over-the-top, further pushed by Tara Rosling in the title role. Rosling is a very dramatic actress with a particular poetic style that can be very good but often just feels false. She’s largely dropped that, or rather adapted it to suit her oddball role, in Misalliance this season so I was hoping she wouldn’t carry it to Helen’s Necklace. Alas, it’s more prominent than ever before. See, the trouble with the text is that it uses the search for a lost necklace (one that’s cheap and has no actual sentimental value beyond the confidence it gave its owner) as one big metaphor for lost….something, everything. The more dramatic the actress plays said inconsequential problem, the more ridiculous the character. Helen is absurd and what she cares about is absurd and her priorities are absurd and the more Rosling coos and mulls over her absurdly trivial lines the more the audience tires of her self-important and self-pitying antics. Now, there is the occasional perspective-giving moment in Helen’s uninspired search for her sense of self, but I never really believed that she learned from them because she goes back to her “this replacement necklace is too heavy, it will make me heavy” self-indulgent poeticism the moment those moments pass.

The production’s saving grace (aside from the beautiful and evocative set designed by Judith Bowden) is Sanjay Talwar who plays everyone who, thankfully, is not Helen. Even the abrasive jewelry salesman and a slightly over-played grieving mother and the kind cabbie who literally speaks 3 words of English- anyone and everyone is more engaging than Helen (who is obnoxious both in text and performance within seconds of the play’s beginning). The aforementioned cab driver, Nabil, is Talwar’s best character, making use of his unique warmth and wordless communication skills. There’s a reason he’s always stood out, even when playing tiny Stratford parts like Lennox in the back of 2008’s Macbeth or the largely absent Mr. Darling in 2009’s Peter Pan. Talwar is a lovely actor and almost made me care about Helen’s journey, because Nabil cared about Helen’s journey and I cared about Nabil.

Skip Helen’s Necklace, Ragtime is playing right next door. If you decide to ignore my advice, it’s playing at the Shaw Festival Studio Theatre until  August 31st.